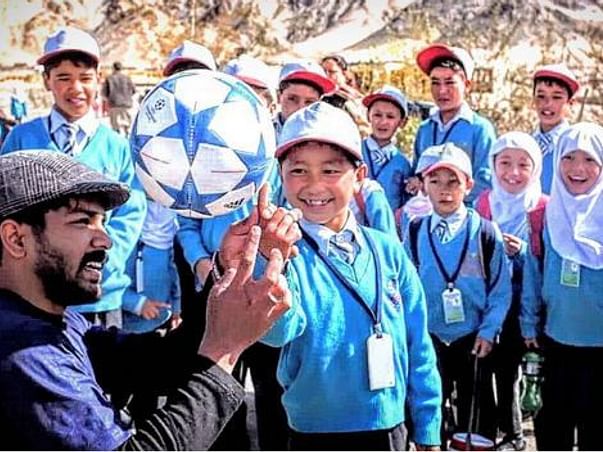 https://youtu.be/cZCA2_DxJoo
Tejas, founder of non-profit Sparky Football Charitable Trust, has now been selected to represent India at the Street Football World Festival 19 event for the women empowerment towards the FIFA Women’s World Cup happening in France, Street Football World is an international network of non-profit organizations that use football to engage young people and teach them life skills. The event will be taking place in Lyon, France.
This is the invitation letter received by Tejas

The below story was published by Your Story: (https://yourstory.com/2016/05/sparky-football)

"Football for me is not merely just a sport, it’s an art. My own personal journey of struggle and success led me to think about the other wounded people in the society, and how I could make a difference in their lives, through football. I became a football clown and visited slums and hospitals, using my football freestyle tricks to put a smile on the ailing children’s faces. This initiative was done to make kids realise the potential of using happiness as a tool to ignite the spark of change,” says Tejas. R.

The young lad carries the badge of a Football Life Coach, Professional Football Freestyler, a Football Clown, and the Founder of Sparky Football – a non-profit football initiative, which uses football as a life skill module for social change.Born in the year 1992 and a native of Bangalore, Tejas’s achievements in sports such as athletics and hockey were recognized at both state and national level at a very young age. His parents wanted him to pursue engineering, but Tejas had a different plan. Football has always been his true calling. In 2012, he made the brave decision of walking out of a degree, which he no longer wanted, and began honing his skills at the game.
"I always had a strong inclination towards coaching and love for kids. Hence, becoming a football coach seemed the best way I could follow my passion", says Tejas.After several rejections, with a past that flaunted an incomplete degree and no formal training at the sport, he almost gave up on his dream until he found internet and social media as his biggest boon. He started uploading videos of his freestyle performances on YouTube and soon, his work grabbed the much needed attention. Soon, he was approached by leading organisations to train kids, but very soon even this fell apart,

"Coaching in an established set up didn’t appeal to me. I didn’t feel like I was making a difference. Also, my principles behind teaching football to kids did not coincide with the organisations principles. The organisations that I worked for looked at football as a recreational activity, while football has always meant something more for me."

He took a back seat when earning money and making a difference in the society were two extreme options and he had to pick one. He soon realized that his purpose was to work with the underprivileged and to provide them with equal opportunities. Using football as a tool to train these kids, not just about the sport but about various other life skills, brought him great satisfaction. He made his choice and went onto live his dream as a freestyle coach and launched his maiden venture Sparky Football.
Sparky Football was started in the year 2015 with a mission to build India’s No.1 under 19 football team from the Underprivileged kids. The organisation’s motto – Make Your Wounds Proud – was the very inspiration behind this. When asked about his venture, Tejas shares,
"Forming this organisation has been nothing short of an incredible learning experience. Using football as a tool to create a difference in my student’s lives, has not only led them to become talented footballers, but gentlemen with impeccable character and strong sense of social responsibility. Several of my students have already started training other students in football workshops, keeping in mind the principle and philosophy behind Sparky Football."
His firm belief that every individual restores a humongous amount of magic within themselves and when this is shared with others, it brings back happiness in so many forms, grew strong with each passing day as he explored the nuances of the game. His intent to reach out to more people led him to a solo trip to the Himalayas (and other Northern regions of India). He travelled on foot and local buses to create a football documentary, where he understood various cultural differences amongst people from various backgrounds.He continued using football as a tool to connect with people, while analysing how football could create a social impact in different parts of India. His video ‘Football Journey from Bangalore to Himalayas’ and blog ‘My Closest Experience to Heaven – Himalayas’ was very well received by the audience.His journey turned more interesting when he received a fellowship from Coaches Across Continents, and became the youngest Community Impact Coach from Asia. In 2014, he won the Indian Football Freestyle Championship, which was awarded by Dennis Irwin.Tejas with Manchester United legend Dennis Irwin

At the age of 19, he became the youngest football Coach and referee in the country to use football as an education and a life skill module for more than 800 kids in the city. He was awarded as The Warrior of Change for using football as a life skill module in the most innovation category in change makers in the society by ‘Youth for Seva’.
Coaches Across Continents, a forum in partnership with United Nations, awarded him Soccer for Social Impact. In 2013, at the age of 20, he became the Youngest TEDx speaker of India. In 2015, he received the honor of Hero of Bangalore award from the Indian chief justice Sir Santhosh Hegde for keeping the city at its best through football. The same year, he went on to become the youngest speaker at INK Women, Bengaluru.

Tejas needs your support in getting the required funds for the trip to Lyon, France.

Given below are the details provided by Tejas:

What I will be doing there?
- I will be representing India and Sparky Football after a panel interview from France. I will be assisting, mentoring, coaching the youth delegates for the socially and economically less privileged kids coming from all over the world.

This opportunity will help me lead the locally led and designed football programs at Sparky Football which is aimed to Engage, Educate & Empower children to create legacies based on UN Sustainable development goals for a long lasting social impact in India. This opportunity will also bring a great success for me and for all the stakeholders at my organization. In future, I will be able to share these incredible experiences with the communities I work with, other partnered organizations across the world and inspire the younger generation for able to work towards the journey of what is purposeful and meaningful.

Why I am looking forward to take up this opportunity?
- I strongly believe that Street Football World is a young, global and cross-disciplinary community of path-breakers who we believe will be the shapers of tomorrow. Since it creates a platform for minds that are redefining their field of work, and the world around them, this platform provides me the necessary support to leverage my impact.
I wish to be a part of this community of like-minded peers, on unconventional ‘career’ paths, from various fields. The experience of being a change-maker is often isolating, as it can lack the financial security, clarity of direction and social network that come with traditional jobs. Being a member at Street Football World provides the peer-support necessary to take my work to the next level. I thus, wish to leverage my impact, through mentorship, support, networks and specially designed opportunities. To receive a platform for discovery and exposure, such as the Street Football World, helps change-makers like myself to gain access to potential customers, funding opportunities, accolades and other forms of support, critical for my development and success.

UPI: rzpy.givetomlptejas000002@hdfcbank (Copy to clipboard)
Or
Click here to read the instructions before you make a bank transfer.

Thank you for the wonderful support. I was happy to represent India at Street Football World Festival at France.

Thank you for the wonderful support. The story featured on the Bangalore Mirror this week. http://bit.ly/Tejas_Bangalore_Mirror Please do share the campaign with your friends and family.

Regards,
Tejas
Donate
Report fundraiser
See how thousands are crowdfunding for their causes on Milaap
Content Disclaimer: The information and opinions, expressed in this fundraiser page are those of the campaign organiser or users, and not Milaap.
If such claims are found to be not true, Milaap, in its sole discretion, has the right to stop the fundraiser, and refund donations to respective donors.

Donated to this campaign via Paytm? Click here if you can’t find your donation listed below.
Pk
Priya donated Rs.1,000
A
Anonymous donated $20

Wishing u all the Best !!

Donated to this campaign via Paytm? Click here if you can’t find your donation listed below.
Pk
Priya donated Rs.1,000
A
Anonymous donated $20

Wishing u all the Best !!

You are sending a message to
Tejas R
Go back 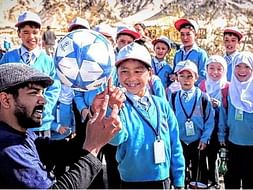