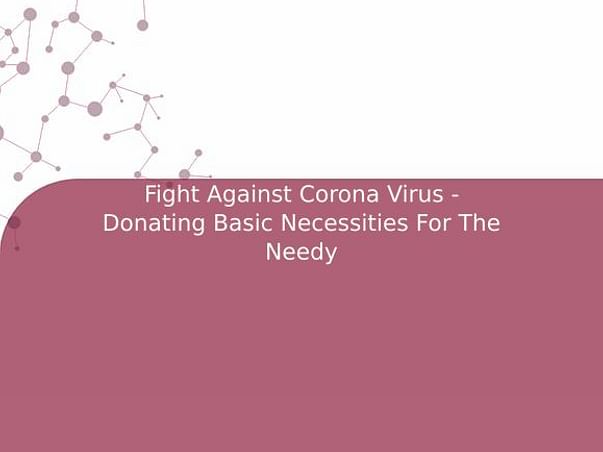 With the recent pandemic that's shaken the entire world. Now it's quickly spreading across different cities in our country.

On various travel, I noticed that most of them did start to wear different types of masks and few started to use their handkerchief to cover and save themselves from the Corona Virus spread. But then it's not the same with people who are working on daily wages, they are suffering the most with no job due to various business shutdown, global market slowing down and they have the least knowledge about the self-hygiene and how to fight with coronavirus.
We are taking an initiative with your help to donate free masks, sanitizers, soaps, and various products that are going to help them to fight against the deadly Corona Virus. As we are aware the only way to stop this from spreading is by taking precautions.
Over the last several days, India’s COVID-19 count has spiked (currently at 800+). There is a stark gap in state mechanisms to increase awareness on the ground, build people’s resilience, and offer adequate welfare measures. In this context, we have been reaching out to low-income and vulnerable communities to understand the situation, its impacts, and offer support. We strive to be safe in doing so.
Through this, we have been able to understand people’s level of awareness of COVID-19, and their current economic situation in the face of measures taken to contain the virus. We have focused on especially vulnerable persons — senior citizens, differently-abled persons, women-headed households, children, and young people. This has helped us understand people’s fears, needs and gauge their preparedness (especially in case a lockdown is imposed).


Overall, there is a lack of awareness on the pandemic, and rumors and misinformation are high across the regions surveyed. Of the 800 plus families* we have already reached out to, 95% of households are dependent on daily-wages. Currently, many people are foreseeing losing their current source of income; many others have stopped earning their daily wages already.

Presented below are the findings from the rapid assessment. This is an ongoing effort and will be updated as we enter the coming weeks:

Workers and wages
Through this assessment, it is evident that the grassroots reach of the healthcare system is completely absent in the face of the pandemic. Barring posters in commercial areas, people resort to hearsay and social media as a source of information to explain this situation. This raises even more serious questions regarding containing the spread of the virus. People do not know how to protect themselves. Their basic needs are unmet and we argue that this has to take equal priority while the government attempts to ensure containment of the virus.

We launched a campaign to raise funds and in-kind support to offer emergency relief food supplies to the urban poor, starting with the most marginalized families first. We have already distributed basic provisions to 200 homeless families, comprising 1,000+ individuals

We have followed a sensitive approach in providing families with a week’s worth of rations per package (Rs 800). This food kit comprises of the following:
We are reaching out to nearly 800 more households and we appreciate any help from you. We are accepting support in cash and kind (foodgrains and non-perishable food only). Together we can help them survive the pandemic.