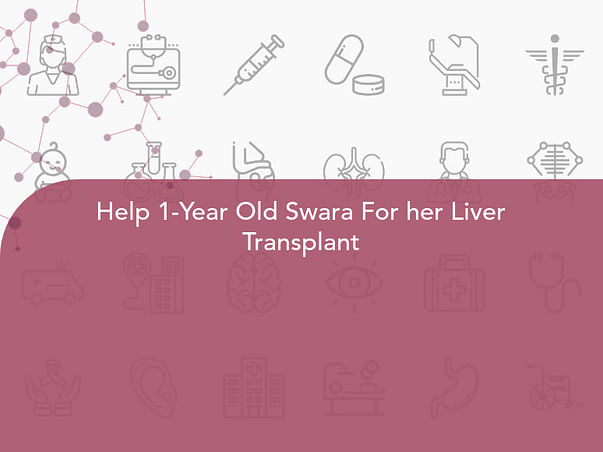 Reshma and Suhas reside in a small house in Sangli (a town in Maharashtra). Reshma recalls how as a 1-year-old, little Swara had just started to walk on her knees. She’d go from one corner to another, trying to pick the toys up with her tiny hands. As her father, who is a farmer, returned home after toiling in the fields, she’d run on her knees towards him, shouting “babababa (father).” He’d immediately carry his baby in arms and shower her with kisses.
However, Swara suddenly suffered severe fever. She also stopped eating. When her mother force-fed her, she’d throw up everything and subsequently, lost weight. She would cry profusely for hours until she drained all her energy. The poor parents soon took her to the local hospital, where after sonography, they were told that there was a problem in their baby’s liver. They were told to take her to Mumbai for further treatment.
Suhas somehow borrowed Rs 2 lakh from his friends and family and left for Mumbai. He was too innocent to believe that the amount was enough for his baby’s treatment, but fate had unfortunate plans for him.
After multiple tests, the doctors told them that their baby is suffering from chronic liver damage and growth retardation (Hereditary Infantile Tyrosinemia (type 1) decomposition in the form of liver cirrhosis rickets, and coagulopathy). She can survive only after a liver transplant which will cost Rs 20 lakh.

Baby condition is very critical and needs urgent treatment. Her mother is a donor for her but can't afford the treatment money. Urgent surgery is required to save Swara to survive. Their parents need help to save the baby.