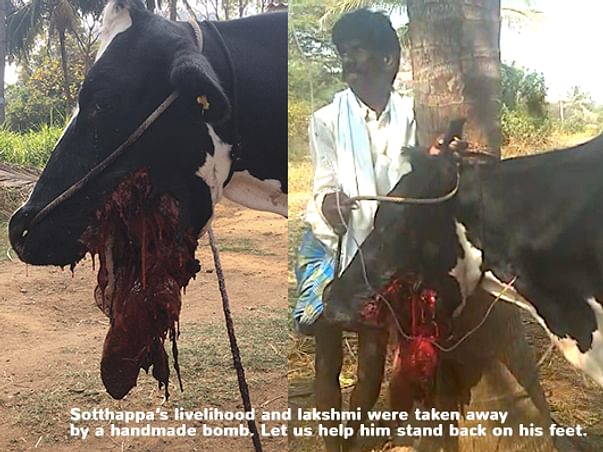 Share
On the 9th of February (2019) around 3.00PM, just outside the tiny village of Thotahalli in Ramanagara Dist. Sotthappa Gowda (Sotthappa as he is called) heard an unusual bang and knew immediately something was amiss.

He had left his cow, Lakshmi, to graze near his field and was tending to his chores. As he raced towards his cow, he realized that something had gone terribly wrong.

Lakshmi was bleeding profusely and her face was blown apart. She was alive. But she was hurt really bad and her entire jaw was literally blown open.

Sotthappa realized that the cow had inadvertently chewed on a country bomb left there by folks who had planted it to hunt wild boars illegally. Poor Lakshmi was the victim of this that day.

Location where the bomb went off
Helpless and not knowing what to do, he called for help. He had tried reaching out to the local government veterinary doctors and they were not able to reach the spot that day.

The poor cow had no help and nothing could be done till the next day. Lying in pain, she bled all night and with her entire throat and jaw blasted out, she could not even drink any water.

I reached to the spot the next morning to help Lakshmi and Sotthappa and could not believe nor could I digest the condition of the cow.

Lakshmi, the next day.
Vets Dr. Ramesh and Dr.Girish were able to reach to the spot the next morning and were very helpful in assessing the grievous injuries and help Lakshmi with her pain.  It was even more painful to learn that Lakshmi was 7 and half months pregnant with a calf.

After much deliberation, it was suggested and decided by the vets that it was best to euthanize her to end her suffering for over 24 hours.

I am appealing for your support in helping Sotthappa to get him a cow so that he can support his livelihood and family. Your generosity will go a long way to bringing a new lease of life to Sotthappa and justice to Lakshmi.

We have filed an FIR with the police, wildlife department as well as have intimated this to the concerned authorities and the news media. The police authorities (the police Circle Inspector - Kanakpura and Sub Inspector - Sathnuru) have promised to find the culprits and take stern action against them.