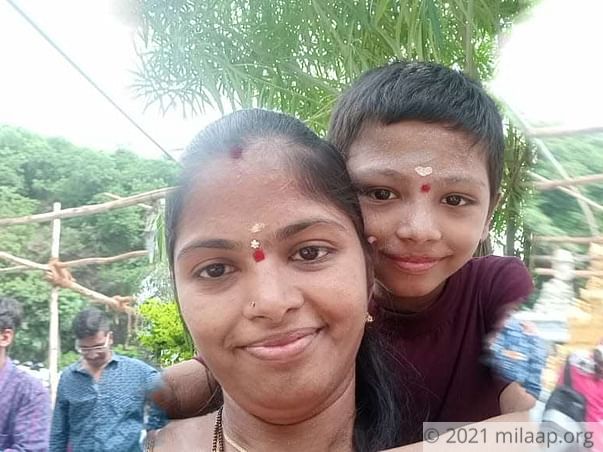 Share
Whenever Siva Manesh and his brother come back from school, they go different ways - Siva goes straight to his room, while Hrithvik runs to play out with the neighborhood boys. Siva watches longingly through the window as his brother kicks and dribbles balls, knowing very well that he will never let him be in that position. After he was diagnosed with thalassemia as a baby, a blood disease involving lower-than-normal amounts of an oxygen-carrying protein, his life has only evolved around frequent blood transfusions and numerous restrictions.


“I have always kept him indoors to protect him as he has always been weak due to his condition. He loves eating chapathi and sweets made of jaggery, but he is not supposed to as they contain high amounts of iron – his blood already has dangerously high amounts of iron due to the blood transfusions,”-Uma, mother.

Every 21 days, Siva becomes ‘Superman’ who endures the pain of needles bravely

Siva Manesh lives with his parents, Uma and Sreenivasalu, and younger brother Hrithvik in Nellore, Andhra Pradesh. He is a normal child who likes to paint and dance to his favourite music most of the time, but once his blood levels drop every 21 days, he becomes a different kid altogether – his face turns pale and he stops eating. Whenever this happens, his parents rush him to Chennai, (more than 176 km away) where he undergoes a blood transfusion. The process is painful, but Siva endures it with a smile.


“I am superman, no Amma? This pain is nothing. You don’t worry,” Siva tells his worried mother every time she sheds a tear.

This poor boy was recently diagnosed with hepatitis C, a severe infection of the liver caused by a virus that he is suspected to have caught from his routine transfusions. He is currently under medication for it, but once he recovers, he needs a bone marrow transplant – his condition is so critical that he cannot survive on blood transfusions alone anymore.


“Doctors told us that it is so easy for infections to spread through blood and it is not advisable to continue being on transfusions alone. The only curative option is a transplant – but it is expensive and we are struggling,”-Uma, tearfully

This mother begs to save her son-cum-best friend

Ask Siva Manesh who his best friend is, and he is quick to reply, ‘Amma’. Be it discussing events that happened at school or holding his hand tight when needles pierce his skin, Uma has been her son’s constant companion. She wants to save him at any cost, but money is the biggest obstacle. Her husband and Siva’s father, Sreenivasalu works at a cement shop and earns only Rs 9,000 a month. With this meagre family income, they have been jiggling household expenses as well as Siva’s transfusions. It is impossible for this lower-middle class family to afford the lakhs that is required for the bone marrow transplant.

Siva’s pain can end if we all come together to help him get the transplant soon. He too deserves a chance at a normal life, and you can make it happen.