Help Sayan Bring His Mother Back From A Heart Leakage | Milaap
This campaign has stopped and can no longer accept donations.

Help Sayan Bring His Mother Back From A Heart Leakage 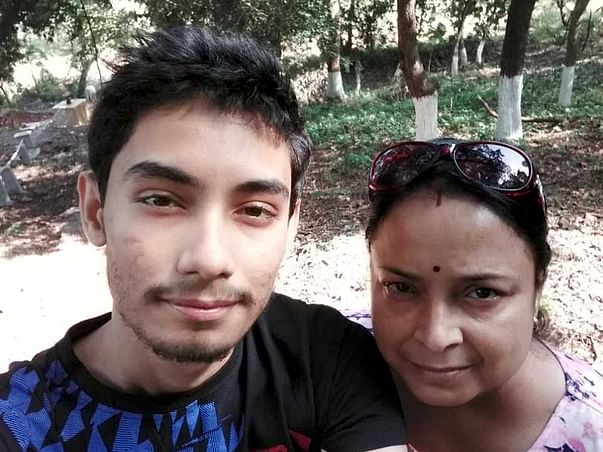 We were a small and happy family from Jadavpur, Kolkata until June last year when my mother, Mrs Sima Mukherjee, who was just 51 then, suddenly fell ill. Initially, the doctors assumed that she was suffering from mere breathing problem. The same was also treated and my mom returned home in a few days time. Only a few days had passed, that she had to be admitted once again in RN Tagore hospital. This time, the problem seemed way more critical. Doctors assumed that my mother was suffering from heart leakage. By the time we had admitted her, she had also had a heart failure. Although, there was this leakage in the aortic valve, the doctors decided that it was not bad enough to get an operation done. This condition continued and soon she was brought back home.

She seemed fine till November 2018. Also, things were going great with our family since I got my first job through campus placements in my college. This time we had to shift her to AMRI hospital, where the doctors opined that we must go on for the valve transplant. Just to take a better opinion, we went on to Devi Shetty, the famous doctor. However, he suggested, that although surgery is almost avoidable, and is also not recommended at this point in time.
Happily, we came back to Kolkata with the joy that soon my mother would be fit and fie. But destiny had other plans. In the month of April, things deteriorated to new lows. This time, AMRI doctors confirmed that my mother was suffering from two failures in the heart valve. They suggested a re-synchronisation therapy( a pacemaker). This according to the doctors would solve both the leakages and she would be good to go. This cost us a hefty 6 lakhs. We were more than happy shelling that out of our pocket as we somehow felt that my mother would be fit and fine and fine she was after the operation was done.
Just when things started to feel at ease and there was a reason for us to smile, cause I had got my joining date in TCS, my very first job. My joining date, in the month of July was when she again had a severe failure and was admitted instantaneously to AMRI. The sergeant was not confident enough to operate. So, we had to shift her to Desun hospital where they went through an open-heart surgery after having paid abill of Rs. 2 lakhs to Amri Hospitals. This entire ordeal did cost us Rs 6 lakhs approx again. The patient was once again shifted to AMRI, where they confirmed that she had a 5% chance of survival. Now she is in the ventilator. The approximate charges per day is around Rs 80,000 to Rs 90,000.Till now, we have had to pay a bill of Rs 3lakhs to AMRI for 4 days of her treatment.


While she was lying on the bed, I have topped my college examination. I have drawn my first salary. I have graduated. But she is unaware of all these and she lies their unable to speak or talk with us. Give me and my mother an opportunity to relish some of the biggest news in both of our lives. Its a hearty request to help us in the cause. Your little donations can help me have my mother back
Bill of Desun 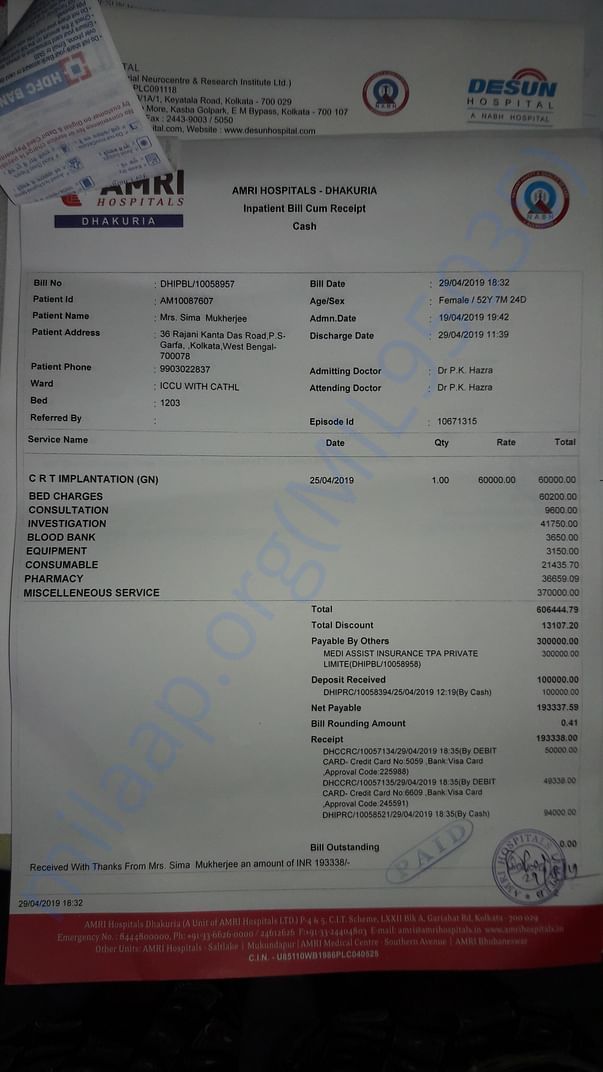 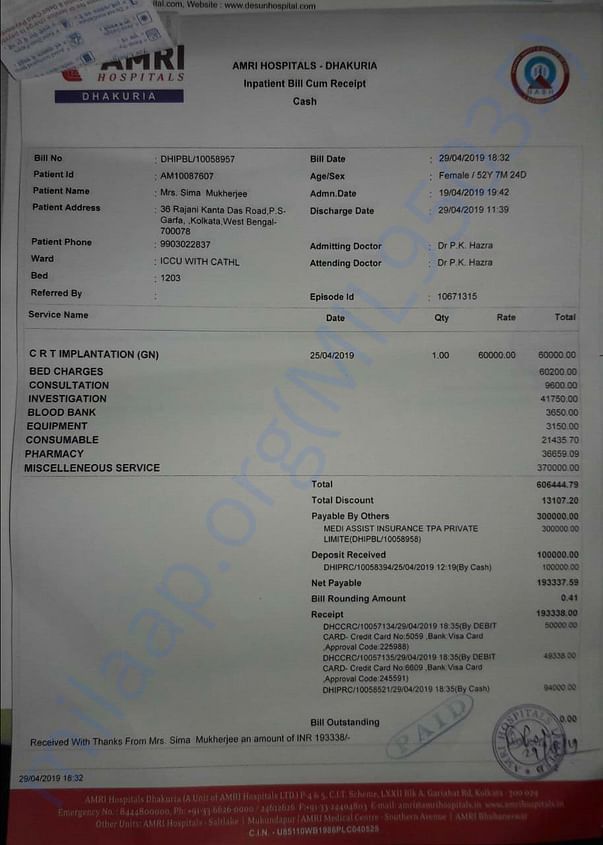 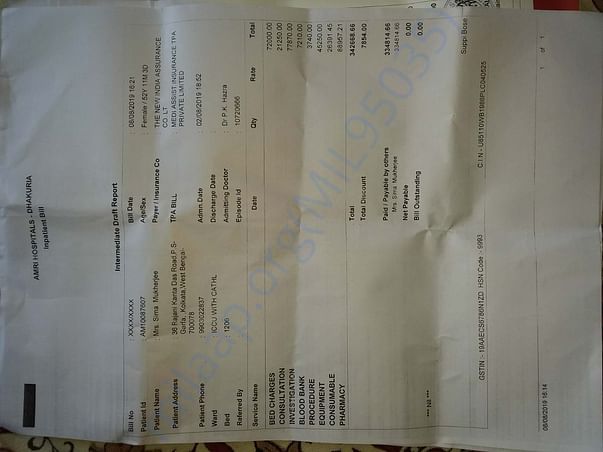 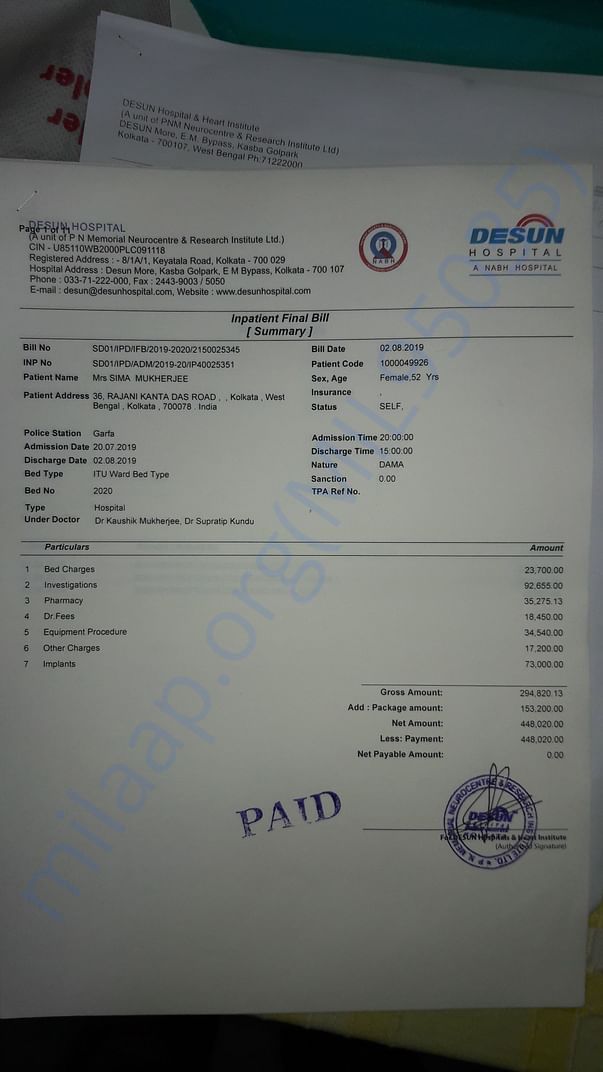 Bill as on date at Amri 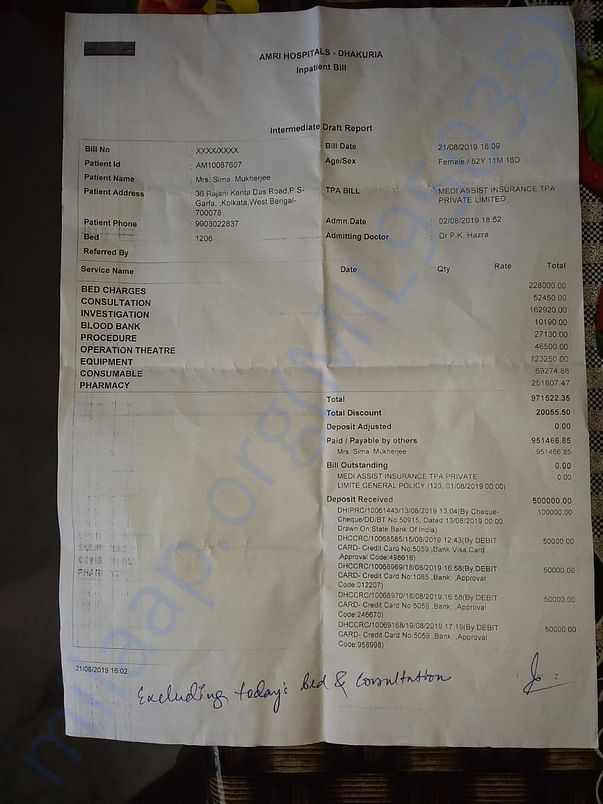 Your support has been really inspirational. We have some unfortunate news to share with you all, my mother, Sima Mukherjee is no more. She was not responding to the treatment and was in a very critical condition. The doctors gave their best, but their efforts were in vain. Thank you all for supporting us during this difficult time.

Please do pray for her soul to rest in peace.

My mother, Sima Mukherjee, is not responding to the medical treatment. It is becoming really difficult. Please do share the campaign and please do pray for my mother.

My mother is still in the ventilator, with dialysis going on. The treatment cost per day is again shooting up. Please do continue your valuable support and please do share the campaign with your friends and family.

Thanks
Load more
Donate
Report fundraiser
See how thousands are crowdfunding for their causes on Milaap
Content Disclaimer: The information and opinions, expressed in this fundraiser page are those of the campaign organiser or users, and not Milaap.
If such claims are found to be not true, Milaap, in its sole discretion, has the right to stop the fundraiser, and refund donations to respective donors.

Donated to this campaign via Paytm? Click here if you can’t find your donation listed below.
A
Anonymous donated Rs.1,500
K
Kishalay donated Rs.500

Donated to this campaign via Paytm? Click here if you can’t find your donation listed below.
A
Anonymous donated Rs.1,500
K
Kishalay donated Rs.500

SM
You are sending a message to
SAYAN MUKHERJEE
Go back 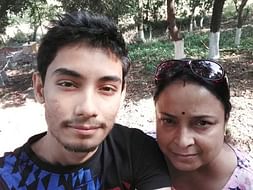 Help Sayan Bring His Mother Back From A Heart Leakage