Confined To Hospital Because Of His Illness, This Boy Begs To Go Home | Milaap

Confined To Hospital Because Of His Illness, This Boy Begs To Go Home 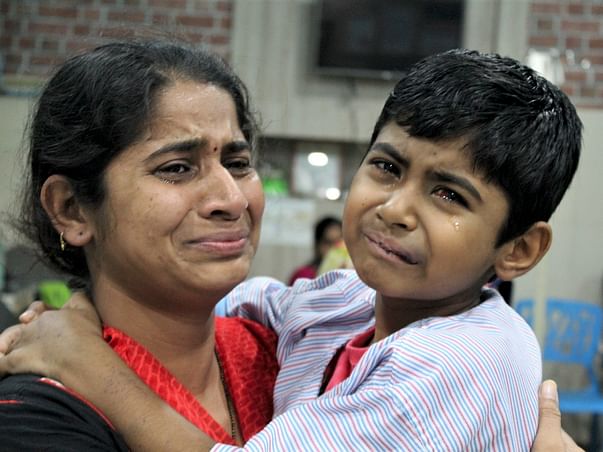 Shreyas can’t eat his mother’s home-cooked kadi chawal (rice and curry) anymore. Even a little spice can be a danger to his health. He bleeds from his nose and gums, and often has fever. Shreyas’ blood disease has stopped him from doing all his favourite things in the past 6 months. He can’t go skating or play with his friends. Injections and medicines have become a part of his life. This terrible blood disease has taken over his life. The only way he can survive is with a bone marrow transplant.


Shreyas before the diagnosis

Shreyas has been diagnosed with a severe blood disease called Aplastic Anemia - a rare condition in which the body stops producing enough new blood cells. Children with this disease often experience fatigue, frequent infections, rapid heart rate and bleeding. Blood transfusions can prolong their lives only for a while - a bone marrow transplant is the only curative treatment.

Before he was diagnosed with the disease 6 months ago, Shreyas never had any major health issues except for the occasional fever and cold. He was very active. But he suddenly got patches all over his skin. They took him to a local hospital and he was given medicines. But the next day,  when he started to bleed from his nose and gums, his parents knew that something is serious.

"Initially he needed transfusion only once a week but now he needs it every 3 days. Now he's confined to the hospital. Not even a day has passed without him asking, "Mumma, can we leave today?  my teacher will scold me if I take more leaves." But he still has a long fight ahead of him. " - Priyanka.

Good old days when Shreyas was active and energetic

"After paying towards our house loan every month, all I'm left with is Rs 3000"

Shreyas' father Athish works as a technician in a college. He recently bought a house on loan and he and his wife managed to run the family with the modest income he makes every month. But it became extremely difficult after Shreyas' diagnosis. They had to borrow money for the blood transfusion and medicines. They have been staying in the hospital and managed all these days with the help of their friends and family. Now, they feel completely lost and helpless.


"We have so many dreams for his future. But without the transplant, he's only getting weaker by the day. I can't even afford blood transfusion now, let alone the transplant. We need 22.5 lakhs for it. I don't know how I can arrange such a huge sum of money in such a short span of time. " - Athish.

Shreyas is surviving only on blood transfusions and his blood disease has damaged his immune system badly. He is under a strict diet and even a small infection can make his condition worse. He is extremely tired all the time. The once active boy has now begun to throw tantrums, only because does not want to stay in the hospital anymore. Only a bone marrow transplant can save his life but unfortunately his parents have no means to afford it - your contribution can help him. 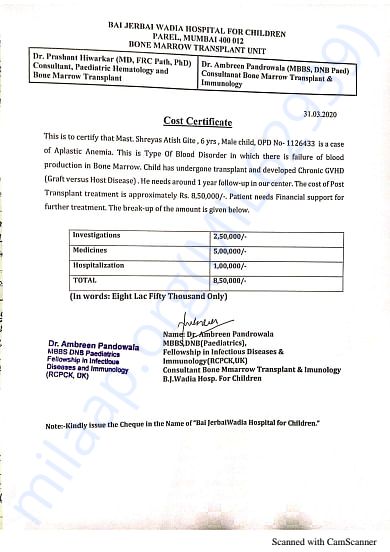 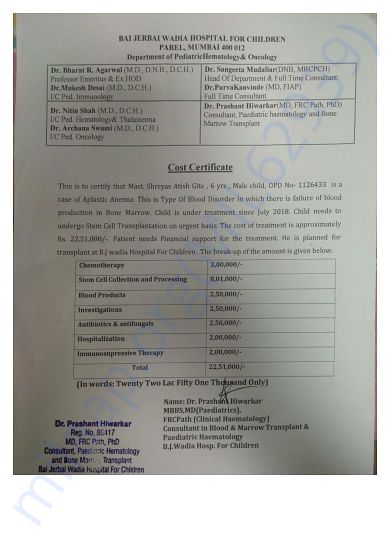 Shreyansh is still admitted in the BMT ward. He is in the post transplant phase and is planned for discharge in the coming week.

We would like to inform you that Shreyansh has successfully undergone the Bone Marrow Transplantation and is now in the post BMT ward under proper medication and the supervision of the doctors.

Shreyash will undergo transplant in the first week of of May. We have already started with his pre-transplant work up. We will keep you all posted.

Scan & donate with any app
check_circle_outline Download payment receipt
Report fundraiser
Know someone in need of funds for a medical emergency? Refer to us
Rs.488,075 raised

Donated to this campaign via Bank transfer/QR Code? Click here if you can’t find your donation listed below.
K
Kogulan donated $25

Donated to this campaign via Bank transfer/QR Code? Click here if you can’t find your donation listed below.
K
Kogulan donated $25 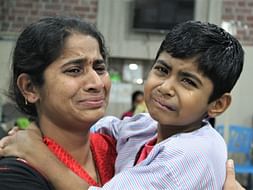 Confined To Hospital Because Of His Illness, This Boy Begs To Go Home