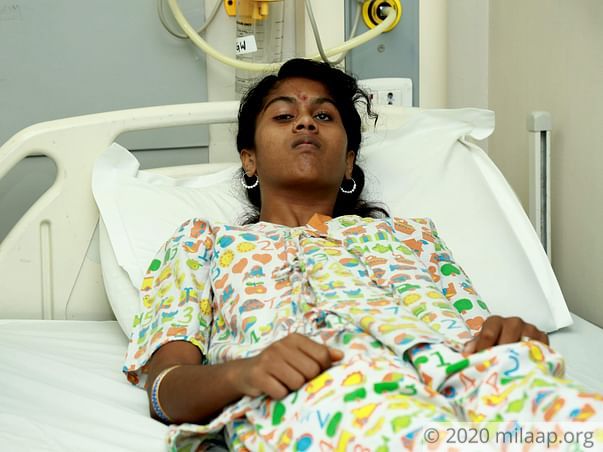 Shanmuga Priya is a bright girl who has had extraordinary skills in mathematics from a very young age. She was greatly inspired when she read about Shakuntala Devi, popularly known as the 'Human Computer' in school, and Shakuntala became her role model. Shanmuga Priya is very popular in school and among the children in her neighbourhood because of her ability to teach maths using easy methods. She is now in 12th grade and often talks about getting admission in reputed institutions to study the subject she loves. Her parents, who come from an extremely poor background, were brimming with pride and were hopeful of their daughter's bright future. Unfortunately, fate dealt them a cruel hand - Shanmuga Priya was diagnosed with a dreadful heart disease and it can turn fatal without urgent treatment.

A seemingly healthy girl was diagnosed with a dreadful heart disease

16-year-old Shanmuga Priya was born healthy and she did not have any significant health problems. In fact, her parents have never seen her being inactive. Even when her parents ask her to take rest, she tries her best to do some productive work. Last month, a heart camp was organised in her school and everyone was asked to come with their parents. Her parents Srinivasan and Padmavathi did not have any reasons to feel apprehensive, but they heard the most shocking news - their seemingly healthy daughter has a severe heart disease that requires urgent treatment. Shanmuga Priya was diagnosed with sinus venosus atrial septal defect, a condition in which the large vein carries deoxygenated blood into the heart. This causes extreme fatigue, rapid breathing, poor growth and frequent respiratory infections. She requires a stent, a procedure that opens the clogged arteries and restores blood flow, at the earliest to prevent it from getting worse.


"When the doctors told us that she had a problem in her heart, we did not believe it. The doctors explained her condition and what it can do to her. We broke into tears, we were trembling but my daughter was the one who consoled us. She was fighting back her tears and she kept saying that nothing will happen to her. It took us few days to come to terms with it." - Padmavathi, Mother.

Shanmuga Priya has only a few months left for her board examinations. She fears that something worse might happen to her before she can write the exams. The once-active and happy girl is now spending all her time in solitude. Although she does not cry in the presence of her parents and appears to be strong, the fear in her eyes is visible and her poor parents are watching her suffer helplessly. She doesn't ask her parents about the treatment because she is aware that they cannot afford it.


"Despite our poverty, we have always been very thankful to God for blessing us with healthy children. The only hope I had in my life was my children but now my daughter's life is uncertain and I'm not able to do anything about it. I have never felt so defeated before. Whenever I cry, she says," Amma, you'll see me shining in the field of maths, nothing will happen to me." I know she is trying to console me but deep inside she feels lost." - Padmavathi.

As a poor construction worker, her father cannot afford the treatment to save her

Shanmuga Priya's father Srinivasan is a daily wage worker. He does construction work and earns Rs 200 per day. There are days where he is left with no job and on those days he has no other choice but to borrow money even for their meals. They live in a small rented house in Thiruvarur district, Tamil Nadu. As he is struggling to make ends meet, he can't afford his daughter's treatment that costs 4 lakhs. It's just beyond his means.

"I don't know what I can do to save my daughter. There is nothing that I can sell and I do not have anyone to borrow from. My friends and relatives are also poor like me, we can have 3 square meals only when we work everyday. How can I afford so much money? My daughter has so many dreams about her future, I can't let her go." - Srinivasan.

16-year-old Shanmuga Priya, a strong and cheerful girl is now fighting a heart disease. She fears that she will not live her dreams of becoming a mathematician. Her poor parents cannot afford the treatment and they are worried that they might lose her. She needs urgent treatment to live a normal life.

UPI: givetosrinivasanfunds@yesbankltd (Copy to clipboard)
Or
Click here to read the instructions before you make a bank transfer. 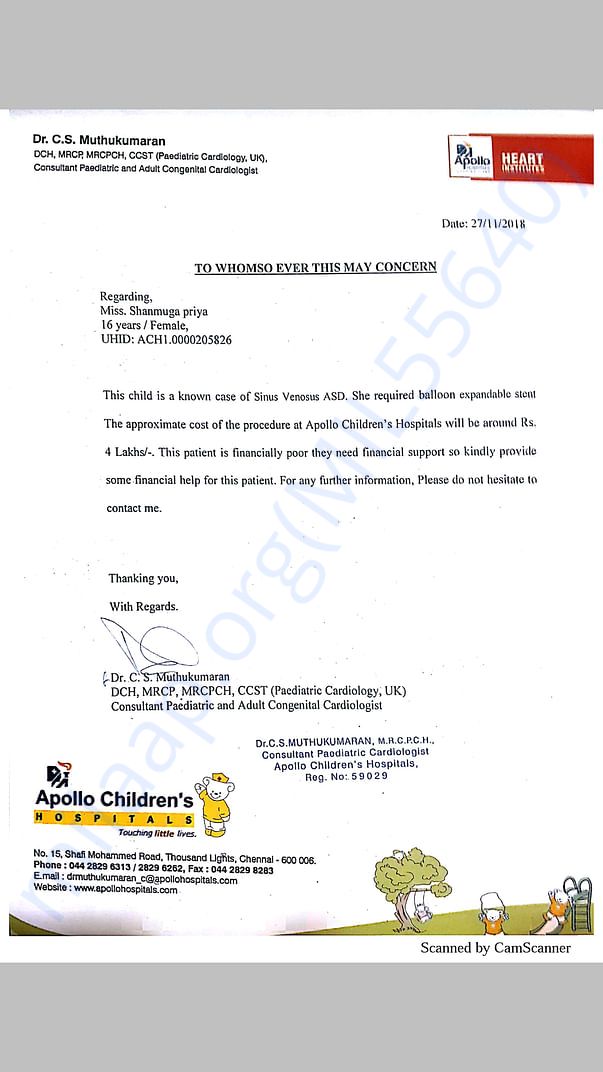 UPI: givetosrinivasanfunds@yesbankltd (Copy to clipboard)
Or
Click here to read the instructions before you make a bank transfer.

Shanmuga Priya is doing good now. She is going to school. She is having breathing problem. She will be visiting the doctor in last month of January post which doctors will decide her further course of treatment and  date for surgery.

Report fundraiser
See how thousands are crowdfunding for their causes on Milaap
Rs.7,000 raised

Donated to this campaign via Paytm? Click here if you can’t find your donation listed below.
A
Anonymous donated Rs.500
CM
CHANDRA donated Rs.1,000

Praying for your recovery

Donated to this campaign via Paytm? Click here if you can’t find your donation listed below.
A
Anonymous donated Rs.500
CM
CHANDRA donated Rs.1,000

Praying for your recovery 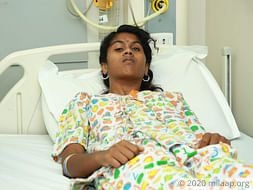