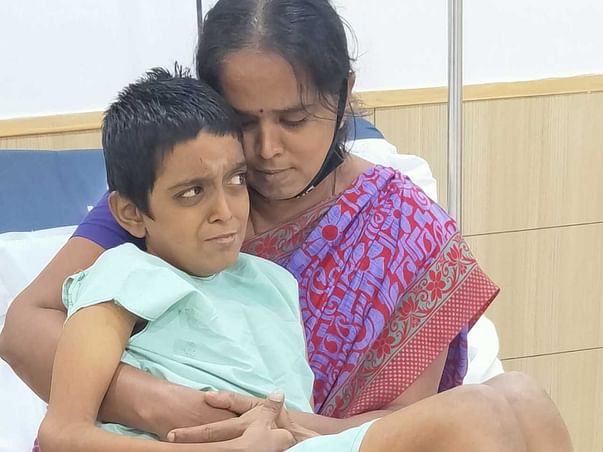 Angayarkani and Shankar got married in the year 2007 and after one year, Angayakarni was pregnant. The parents were overjoyed with the news. When Sridhanan was born, the parents felt that their family was complete. But soon, things took a turn for the worst when in the year 2013, Sridhanan suddenly fell sick.

Today he is in the hospital, his liver is failing and he needs an urgent transplant.“It all started in July of 2013 when he was diagnosed with chronic liver disease. He has been in pain all the time and frequently vomits blood. His liver has deteriorated to an extent that he urgently requires a liver transplant but I have no idea from where will I get such a huge amount to pay for his treatment,” said Angayarkani.
The treatment will cost Rs 15 lakh which is almost impossible for a family with their financial background to gather. For the past 7 years, they have been using whatever money they could get for their son’s treatment but now they have exhausted all their means.

Shankar works in a vehicle shop through which he used to earn just enough to sustain his family. Since the lockdown was imposed, he is jobless and now the family does not have an income source. Initially, they borrowed money from their family and friends but due to the pandemic now even they cannot help them.“My son is always tired and lies on the bed without uttering a word. Sometimes he cries in pain at night, holding his stomach. All I can do is hold his hand and give him the strength that soon things will get better but most of the times I live with the fear of losing him,” said Angayarkani, wiping her tears.

After preliminary tests were done, it was found out that the mother can donate a part of her liver. This has given the family a little hope but they still have no idea how to afford the treatment. They desperately need your help.With your little contributions, the poor parents will be able to get the transplant done. Please help them & bring back happiness into their lives.