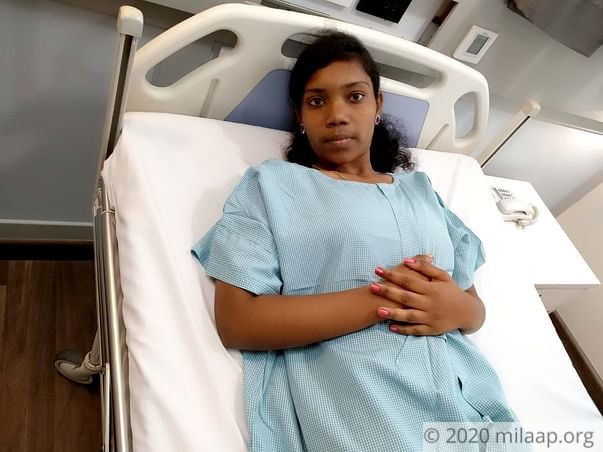 When 22-year-old Sathya, the youngest of the family said that she wants to pursue Nursing after completing her 10th grade, her family was surprised. They couldn't believe that their angel of the family has grown up and now all set to support the family in her own ways. Having experienced heart disease at a very age, She knew about the physical and emotional strength the disease demands. She was all set to help people, little did she know that she needed all the strength to battle her own heart disease for the second time.

Sathya was born perfectly well, being the youngest in the family, she was pampered by her parents and her two sisters Geetha (29), Reetha (26). She is the apple of their eyes. She was very active and cheerful. When she turned 10, she fell sick and became very weak. Parents were terrified when she said she has chest pain. They rushed her to hospital. A couple of tests were taken and the reports confirmed that she has two holes in her heart and needs surgery at the earliest.

Sathya's parents were devastated and they did not know what to do. The very thought of losing their daughter shattered them completely. They managed to gather all their strength and did everything possible to get her surgery done. Sathya had her heart surgery to remove the blocks and she was back to her routine life with the same energy and smile within few months.

Sathya has got the dreadful symptoms again

Ever since the surgery her family has been very careful of her health, they pay attention to every little thing like her diet and sleeping patterns. Over the years, they believed that she is free from all the dangers and she will have a normal life but life took a drastic turn when she turned 22.

"She had her first surgery when she was just 10, I was so worried, I was very protective of her. I become very anxious even if she gets a cold. She always tells that she is strong enough to fight anything, maybe that is why life has given her another battle. I can't bear to see her going through so much pain. She does not tell me but I can feel it. " - Selvi, Mother.

She has breathing trouble and extreme chest pain

It was just a few months since Sathya has started with her nursing course. Suddenly, she felt very tired and was falling short of breath often. She thought because of the workload. She had a severe headache and when she got that familiar chest pain she was shocked. Yet, she believed it was temporary. When her chest pain became unbearable she was forced to acknowledge something is wrong again.

Sathya is now at home. The frequent chest pains have made her very weak, she faints at times not bearing the pain.  Doctors said that her valve is leaking severely and needs surgery at the earliest.

"I did not want to tell my parents, I thought I can manage. I didn't want them to go through the painful journey again. When I was 10-year-old, I didn't know the cost of the surgery and how they managed but now I know my family situation. How can I put them in trouble knowingly? They came to know about it by looking at me! They found out that I was suffering." - Sathya.

Sathya will not survive without a surgery

Sathya is worried that she might not survive, she has begun to fear death. Yet, she tells her parents that she cannot bear to see her parents struggling for her. She feels terrible, she is constantly in fear. Medicines are not helping her anymore. Only surgery can help her but they have no clue whom to turn to help to get the surgery done.

Sathya's father Samandham is a farmer and he is the sole breadwinner of the family. He has already sold everything he had for her first surgery. They are living a hand to mouth life. The pain and fear of death are visible in Sathya's eyes. They are struggling to save their daughter. Sathya can pursue her dreams of becoming a nurse and live a normal life with your support. They need Rs 3 lakhs for the surgery.

Your contribution can give Sathya a chance to live! 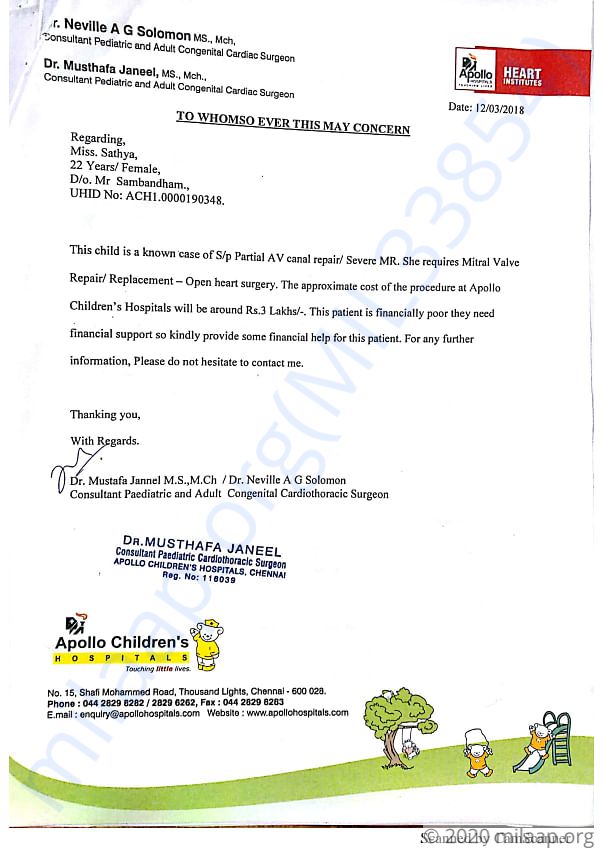 Donate
Report fundraiser
See how thousands are crowdfunding for their causes on Milaap
Rs.37,922 raised

Donated to this campaign via Paytm? Click here if you can’t find your donation listed below.
PM
Perumal donated $1.58

Donated to this campaign via Paytm? Click here if you can’t find your donation listed below.
PM
Perumal donated $1.58 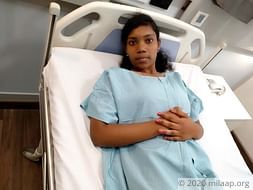