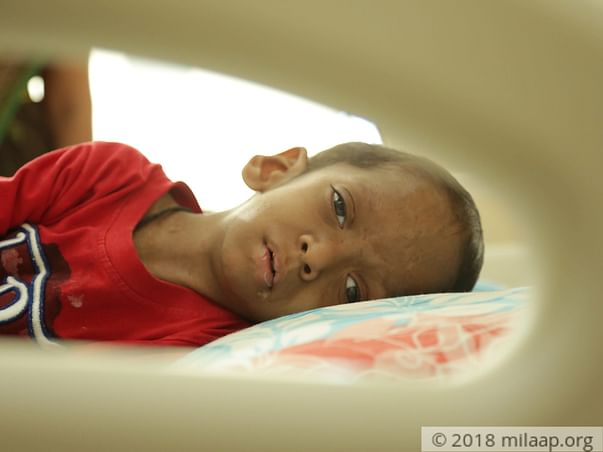 Share
Sathvik (3) started slowly losing his vision when he was just a few months old, but his parents didn’t realise it until he started walking around by feeling things around him. They were devastated when they were told that their only son was losing his vision to a deadly disease. Sathvik needed a bone marrow transplant and they did everything they could to afford it. His parents were hoping for a healthier life for him. Unfortunately, their happiness was shortlived.

Little Sathvik was diagnosed with osteopetrosis, a rare genetic disorder whereby the bones harden and become dense. The disease is extremely rare and occurs 1 in 3.3 million. The disorder affects the cranial nerve causing blindness, deafness and facial nerve paralysis. Sathvik has partially lost his sight due to this dreadful disease. Only a bone marrow transplant could save Sathivik from this disease. Fortunately, his father Nageshwar was a suitable donor. Fearing that their only son will lose his sight and eventually his life, Sathvik’s parents borrowed 30 lakhs for the life-saving transplant.

After the transplant, his parents hoped he would recover but to their despair, he's now suffering from a dangerous infection

A few months after the transplant, Sathvik was diagnosed with cytomegalovirus infection, that affects the digestive system and nervous system and can also cause vision loss. Sathvik needs to stay in the hospital for 15 days more, otherwise, he will lose his vision and life to this life-threatening infection.

“Every time I sit beside him and read out stories to him, he would eagerly listen to me till the very end. He’s such a smart and loving child. I thought that all of my son’s suffering had finally come to an end. I was even planning to send him to school. I never thought he would have to suffer more. Now his condition is only getting worse because of a life-threatening infection. Every time I feed him, he throws up immediately. He looks dull and exhausted because of extreme weakness. We nearly lost him once because of the dreadful disease and now we risk losing him again to this dangerous infection.” - Sujatha, mother.

Sathvik has a high fever every other day. He constantly complains about the pain in his stomach. He doesn’t eat food or drink even a sip of water. He's growing weaker and thinner with each passing day. He has already been through so much for his age and his parents cannot see their son go through this endless suffering.

Happy and cheerful Sathvik before his health got worse

With the little income Nageshwar earns as a daily wage labourer, it’s been difficult for him to provide treatment for his son. He did everything he could to provide his son with a life-saving transplant by borrowing from relatives, hoping and praying that his son would finally be free from the pain. But now watching him suffer once again because of the severe infection, he fears he will lose his son without treatment. Nageshwar has exhausted all the money he had and needs your support to save his son.

Little Sathvik has partially lost his sight to the rare genetic disease. Any delay in treatment would make him completely blind and eventually affect his life as the deadly infections spread. With no money left, Sathvik’s parents fear they will lose their only son without help.