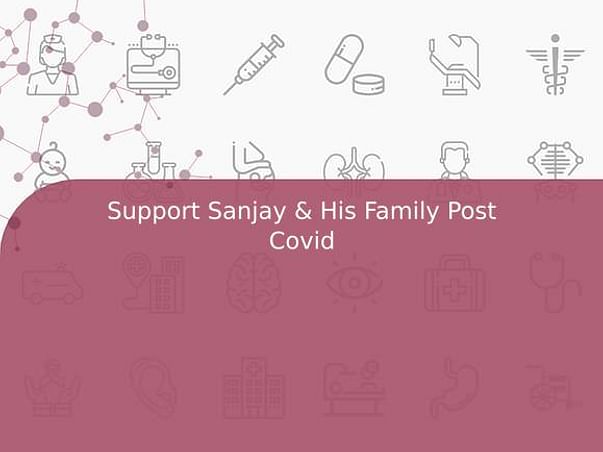 Due to the pandemic last year, Sanjay had to shut down his business and soon after lost his mother to a cardiac arrest.
This year he took a low paying, in fact barely paying job to make ends meet & support his family, but in April his daughter tested positive for covid and for that entire month he couldn't attend office, to take care of her.
Ironically in May he himself tested positive and had to be admitted to a hospital, because of an infection in his lungs resulting in pneumonitis that could not be handled at home, giving a final blow to his family.
They had to spend their entire money on his tests and medicines before he got shifted to a hospital because of his worsening condition. As of now he is under the doctor’s observation at the hospital.
Since he couldn't attend office due to this for almost 2 months, he was asked to leave. Now with no job, he & his family are struggling to even afford post discharge medication, let alone pay for his daughter's school expenses and wife's medicines since she is also a patient of epilepsy, not to mention the expenses to pay for his ration, rent etc.
I would like to raise some money for him to be able to afford a decent living till the time he finds a suitable job for himself.

The family is already in the middle of a war against the virus, lets make it easier for them on the finance part, for as much as we can. There have been many fundraisers for the people who have lost their lives to this virus, for once lets donate for the ones who came out alive and are struggling to pick up the pieces from there.
I request you to help in whatever way possible.
Please donate whatever little you can to support this family, I can’t stress enough on the fact that no amount is small.