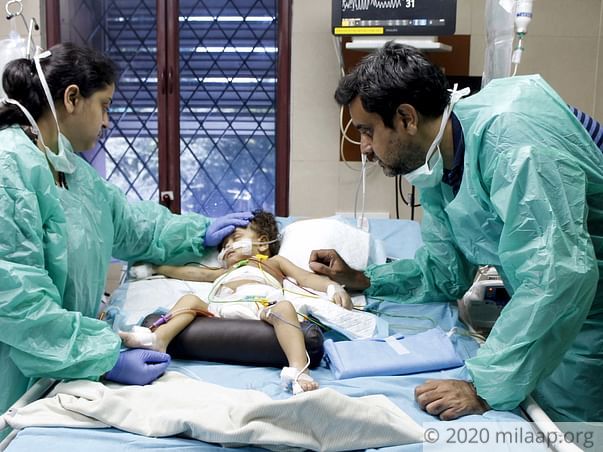 “Whenever they take my 1-year-old son, Samriddho inside the operation theatre, I pray a little, hoping that this shouldn’t be the last time that I see him. After 5 surgeries in just a year, my baby has been reduced to bones. There’s no part of his body that hasn’t been pierced with needles multiple times. His face is covered with tubes. My little champ has held on so well that even the doctors say he is a fighter. But I don’t know how long is it before his little body gives up,” Sourav, Samriddho’s father.

Little Samriddho’s sufferings started just after he was born. He was diagnosed with biliary atresia, a condition in which bile ducts are blocked or completely absent. The little baby underwent a liver transplant in February when he was just 9 months old. After a painful battle of several months, Sourav thought that finally, his baby will be happy and healthy. But his happiness didn't last long.

“Four months after the transplant, my wife Madhumita and I found out that he had a tonsil swelling. A few days later, he vomited blood. He had lost so much blood that we were scared we willl lose him. Since then he’s sufferings haven’t stopped”- Sourav, father

He underwent 5 surgeries after the transplant

Samriddho now suffers from 'Post-transplant lymphoproliferative disorder' -  a serious complication that occurs in people after a transplant. This could causes infections, perforations and will turn fatal without critical treatment. Baby Samriddho has undergone 5 surgeries after the transplant. Due to this, he cannot be fed and has to depend on liquid supplements.

Helpless parents have to watch their baby struggle every day

Baby Samriddho’s sufferings since his birth have left the parents devastated. Samriddho's mother, Madhumita stays near Samriddho whenever she is allowed to while his father- Sourav goes around arranging whatever little he could to pay for this treatment


“We had our baby' after 6 years of marriage. Madhumita and I had so many dreams for him. We were determined to give him all the happiness. But now, we are on the verge of losing him. My fears of losing him has only multiplied with the passing days.”- Sourav

His father, a teacher, has nothing left to pay for his crucial treatment

Sourav works as a teacher in an institution in Kolkata and had a decent income to provide his family with a normal life. But after Somriddho fell sick, he has exhausted everything to save his son. He has spent his savings and borrowed a lot to spend over Rs 36 lakhs for his son’s treatment so far. Now arranging another Rs 10 lakhs is impossible for him. Without any help, Sourav will lose his baby, for whom he has been fighting for months.

1-year-old Samriddho is suffering from severe complications after a liver transplant and is very critical. He is fighting for his life in the ICU for almost a month now. He might even need another surgery to stay alive. His parents have exhausted everything and have nothing left to save him. 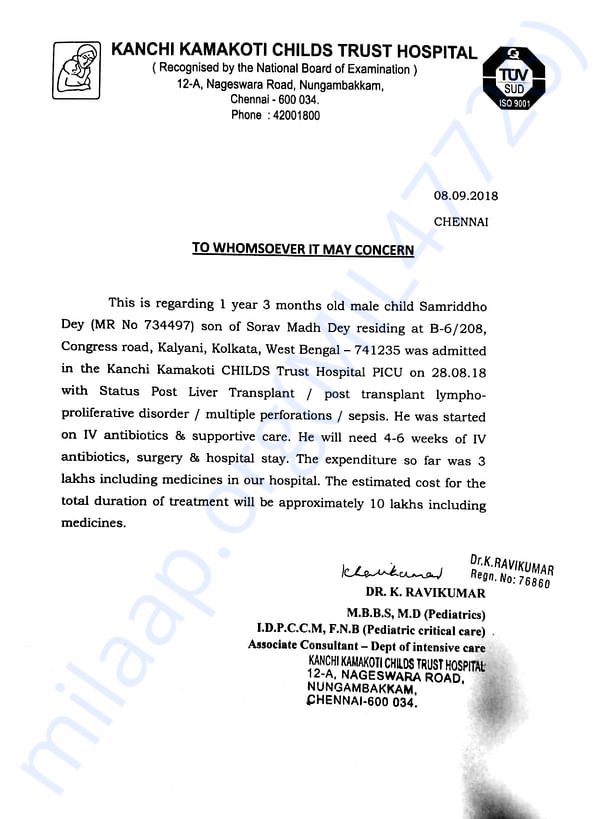 Thank you for the love and kindness blessed on my son.

Samriddho is back home in West Bengal and doing well. He has a little cough and cold which is normal as per the doctor. He is also under medication. We will visit the hospital at the end of the month for a check up.

Will keep you posted. Kindly continue to share the campaign. We are very hopeful of his complete recovery soon.

I am overwhelmed by all the love and blessings showered on my boy!

I am glad to inform that Samriddho has recovered well and has been discharged from the hospital. The doctors are still keeping him under observation with regular tests to ensure his recovery.

I thank all of you for the love and support and also request you to continue praying, so that he can have a speedy recovery.

Samriddho is still in the ICU and will be in the ICU for around two more months. He has a fever and is receiving medication for the same. The doctors will let us know the next course of action only when he gets a little better.

Please keep sharing the campaign because my son needs all the help he can get. Thank you all for supporting us in these tough times. 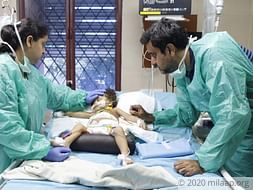