Priest's Son Has Just 10 Days To Get A Transplant And Beat Cancer | Milaap
This campaign has stopped and can no longer accept donations. 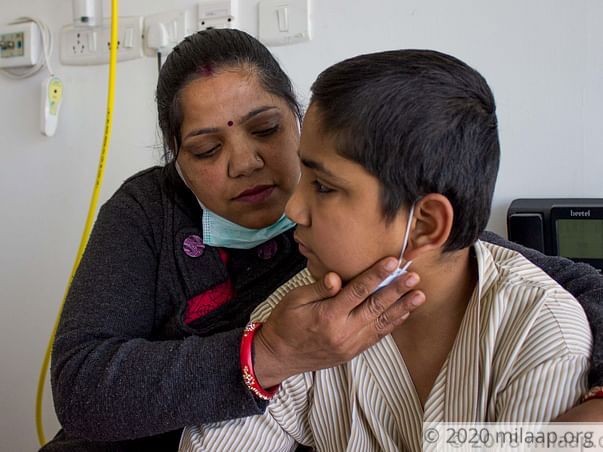 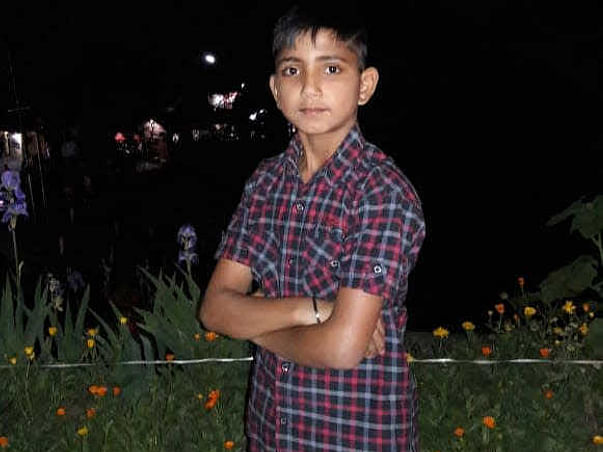 Previous Next
Until this July, Samarth’s day would begin with him accompanying his father, Dinesh, to the temple in the early hours of the morning before leaving for school. He would pray for a new computer game, and be on his way. But ever since his cancer diagnosis, Samarth’s day begins in the hospital. Now when he visits the temple on some evenings, he prays that he gets to go back to school and be healthy like before. Cancer, however, hasn’t dimmed his spirit. Samarth remains positive and often gives courage to parents of cancer-ridden children in the hospital. “Don’t worry aunty, your daughter will be fine once she finishes the treatment. I’ve also fought it once before this,” he says with an assuring smile on his face. Dinesh and Vandana couldn’t be prouder of their son, they find strength in his positivity, but that alone isn’t enough to save him.

Samarth knows he has cancer but remains positive

Samarth was first diagnosed with cancer just before Christmas in 2012. He was only 6-years-old then and had never heard of the word before. But now, Samarth understands the implications of cancer. The tech-savvy child that he is, he decided to Google the word when they found out that his blood cancer had relapsed in July this year. What he found were many articles on cancer and the treatment he requires, but it didn’t deter his spirit.


“He’s always talking or reading about the latest software available in computers and mobile phones. He’s very interested in all this, and this generation knows so much about it. Even if we wanted to, we couldn’t keep him from finding out about his cancer. He didn’t ask us any questions when he did, though. He just said that he will be fine with treatment, and we pray every day that his strength pulls him through.” – Dinesh, father

His father, a priest, has exhausted all his resources

Dinesh has already spent a large amount on his son’s treatment the first time. A priest in Ludhiana, Punjab, he now has nothing left to afford his son’s bone marrow transplant – the only way for him to fight blood cancer. Having borrowed from friends, family and taken many loans over the years, he now finds himself helpless.

Samarth and his older sister

Samarth’s older sister (14) is a matched donor for his bone marrow transplant. He’s positive he will be healthy with the transplant, and with our support he can have that chance. Samarth can go back to school and have the childhood he longs for. He needs 14 lakhs for his treatment and by coming together, we can help Samarth fight cancer for good.
Estimation letter 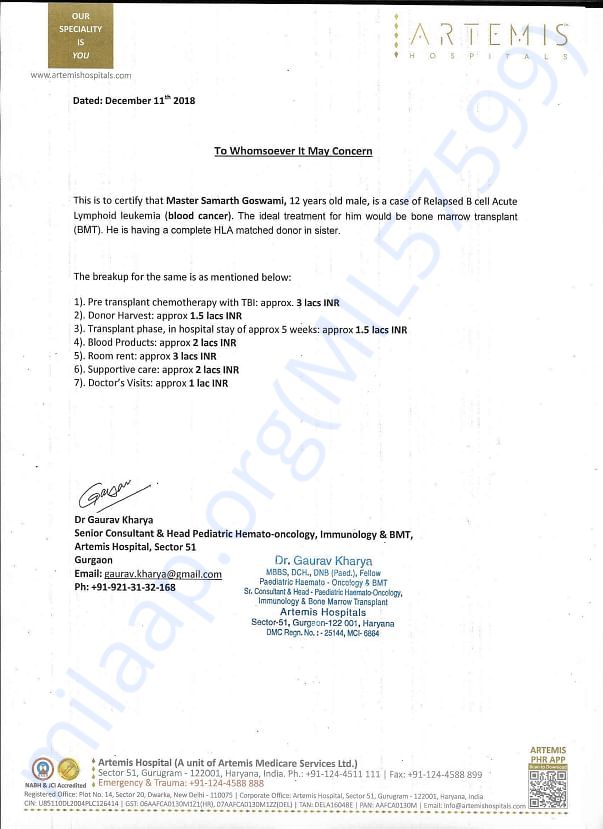 Ask for an update
Donated to this campaign via Paytm or bank transfer? Click here if you have not received an email confirmation from Milaap.
Dear  Supporters,

Samarth is on post bone marrow transplant follow up is clinically doing well. He is recovering and is responding well to the treatment.

I am rejoiced by the love and support blessed on my son.

Samarth is presently in the hospital under observation, medication and is also undergoing regular check ups. He is doing better and we are hoping for a discharge soon.

Samarth is doing well. He successfully underwent his Bone marrow transplant and his elder sister was the donor. He is stable and is recovering. We shall keep you posted.

Report fundraiser
See how thousands are crowdfunding for their causes on Milaap
Rs.1,197,695 raised 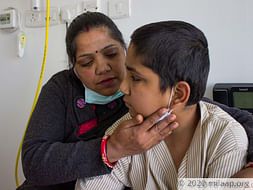