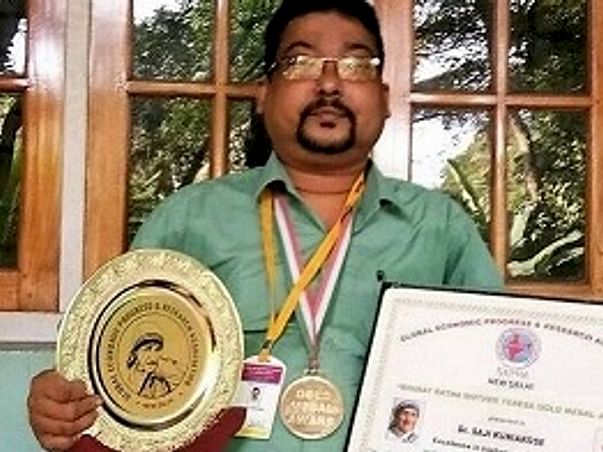 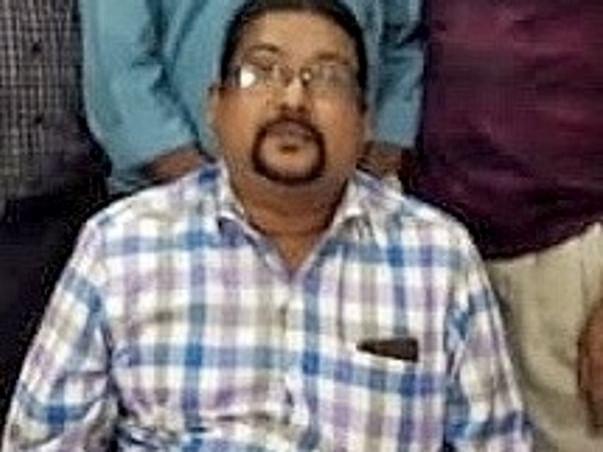 Dr. Saji Kuriakose has been suffering from chronic relapsing Chronic Inflammatory Demyelinating Polyneuropathy (CIDP). CIDP is a form of nerve disease or peripheral neuropathy.  The disease can often be difficult to diagnose and can begin in many ways. Some patients experience numbness which spreads and becomes more intense over days to weeks. Other patients develop weakness which also progresses. In some cases, the weakness can be so severe as to require hospitalization.

He became victim of this disease in his college days (28 years back) and was treated with steroids (One option of treatment) at that time. He continued is steroid treatment over the years and therefore, developed Type-2 diabetes mellitus, hypertension and central serous retinopathy in both eyes all due to the side effects of steroids. He has lost 50% eyesight in the left eye and 25% in the right eye for which he has undergone laser therapy thrice and the condition has slightly improved.

Due to steroid induced diabetes, hypertension, central serous retinopathy and further side effects which will likely to occur, further hike of steroids is not possible. Hence the Neurology department of Sree Chitra Tirunal Institute for Medical Sciences and Technology (SCTIMST), Thiruvanathapuram advised Intravenous Immunoglobulin (IVIG) therapy. IVIG contains the pooled immunoglobulin G (IgG) from the plasma of approximately a thousand or more blood donors and is very expensive. Cost of the therapy at that time was around Rs. 1.25 lakhs/dose. The ‘treatment dose’ was initiated with IVIG 2g/Kg over 5 days as the 1st course on March 2012, 2nd course on 12th April 2012, and 3rd course on 24th May 2012. He continued this therapy for a couple of years. As he was simply unable to afford the cost of treatment, Saji had to stop this and switch back to steroids.

Recently he was admitted to the Amrita Institute of Medical Sciences, Kochi and underwent several treatments for various conditions like Type 2 Diabetes Mellitus, CIDP, Acute Kidney Injury, Hyperkalemia, Right leg necrotising fasciitis etc. Later, he underwent Grade 1 Debridement Surgery on both legs and has not been able to walk without support ever since. So his collegemates collected money and purchased him an electric Wheel Chair. His face is swollen, but the whole body has thinned. He has lost about 13 kgs. He has been under treatment (for various conditions such as neuritis, meningitis, edema) for the last eight years. Has very little immunity now.

Numbness is spreading to his various parts of the body faster. In order to stop this he needs to restart Intravenous Immunoglobulin (IVIG) therapy at Sree Chitra Tirunal Institute,, Thiruvanathapuram. Cost of one session of therapy is about 2 lakhs (which includes 1.5 lakhs for IVIG dose).  This therapy needs to continued at least for year and should not be stopped in between once started. Also he has regular medical expenses every month. Including all these expenses, Saji needs around Rs.30 lakhs as treatment expenses for a year.

He has already spent around Rupees One Crore on diagnostic tests, medicines, steroids, several surgeries, hospital procedures etc. during the whole period of treatment. So he is financially in debt.

His family and friends helped him a lot in the past. But now he is in dire situation and need help from good hearted people like you. So please contribute whatever you can to help Saji to continue his treatments.

Saji Kuriakose was a brilliant student and academic all his life. He passed his BSc (1990) and MSc (1992) with distinction. He passed BEd in Physical Science with first class in 1993. He also took a PhD in Physics and was continuing his research until his illness prevented it. He has also been a Resource Person for several academic programmes.

Saji is married and has 3 children. He works as Principal of St. Augustine's Higher Secondary School, Ramapuram, Palai, Kerala. However his medical conditions have forced him to retire voluntarily and he is planning to do so this year. Once he retires, he will lose the major part of his present income.

Following are few accolades he received during his career

He got fellowship for his study in identifying feasibility of using near infrared spectroscopy to detect and quantify an adulterant in high quality sandalwood oil. He is a member of Royal Society of Chemical Scientists.

Here is his study related publication:

4) Degree of Doctor of Philosophy in Physics from Manonmaniam  Sundaranar           University, Tirunelveli in 2015

UPI: givetosajikuriakose@yesbankltd (Copy to clipboard)
Or
Click here to read the instructions before you make a bank transfer. 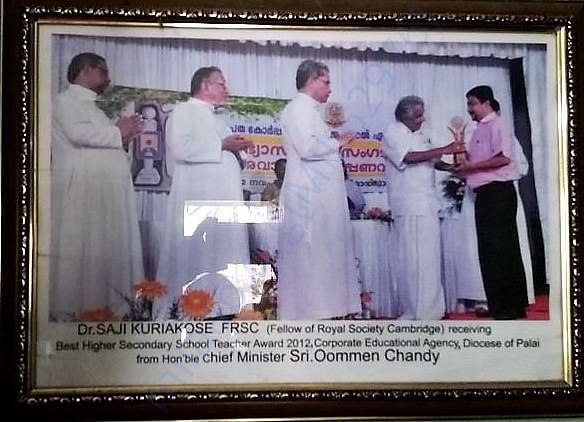 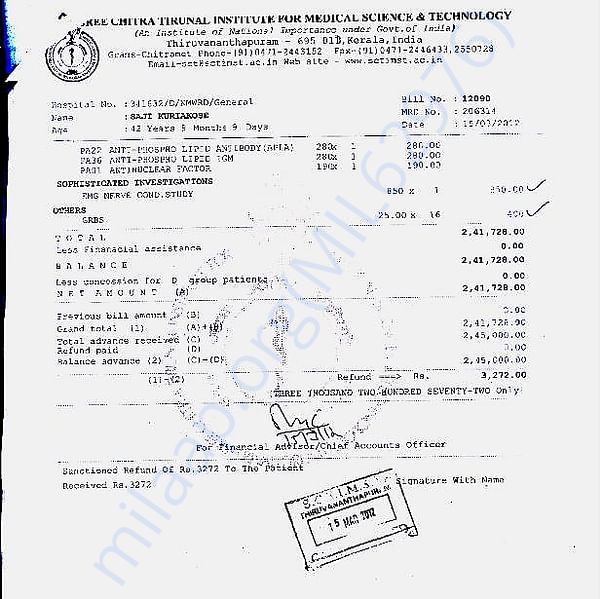 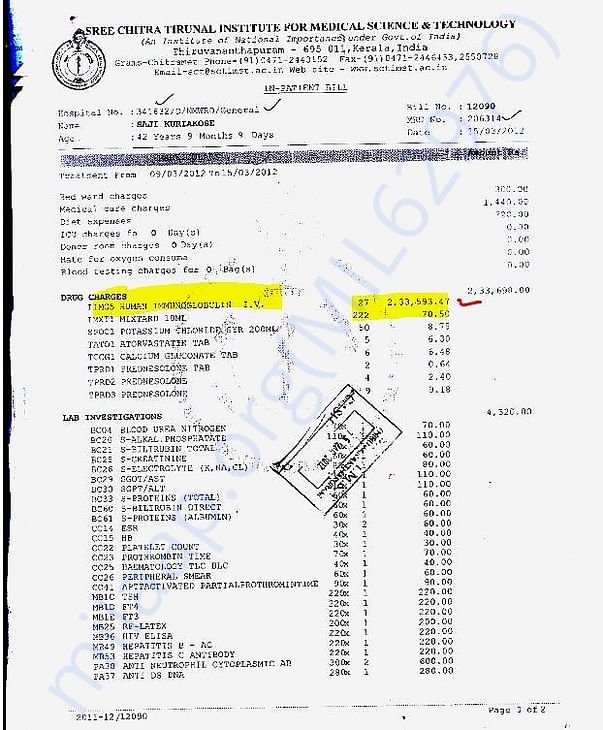 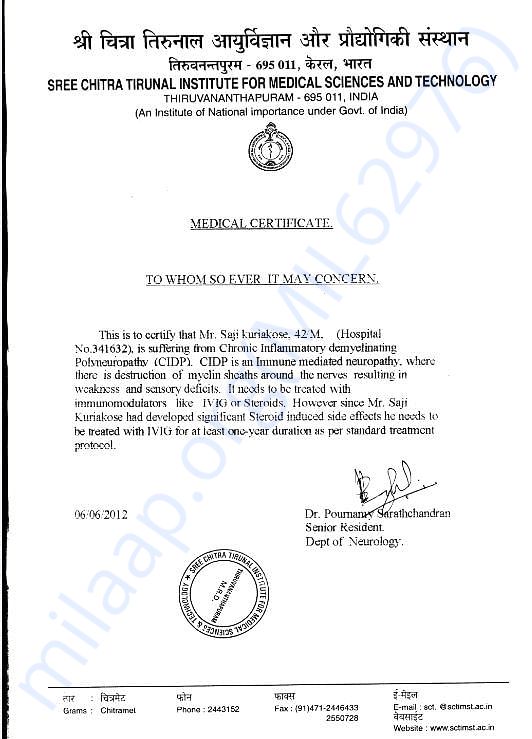 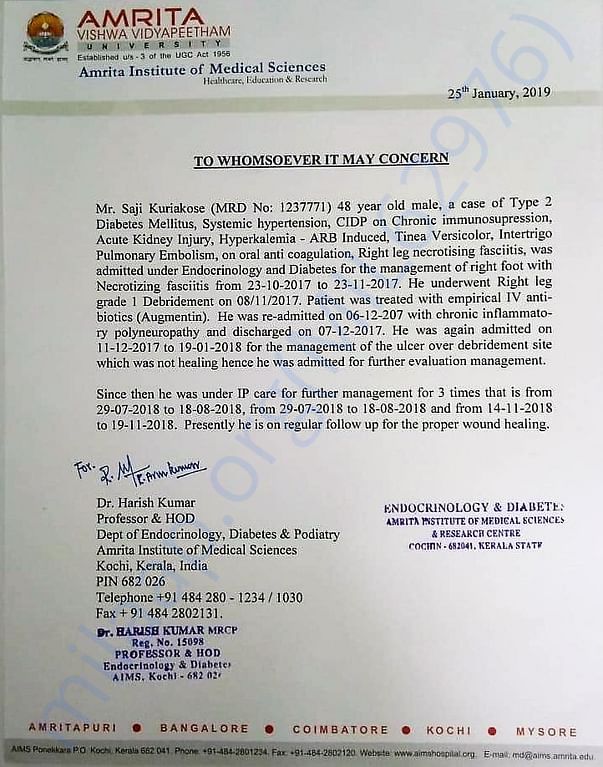 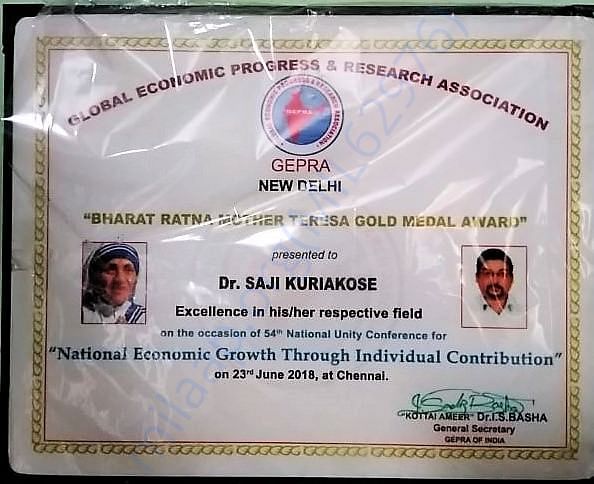 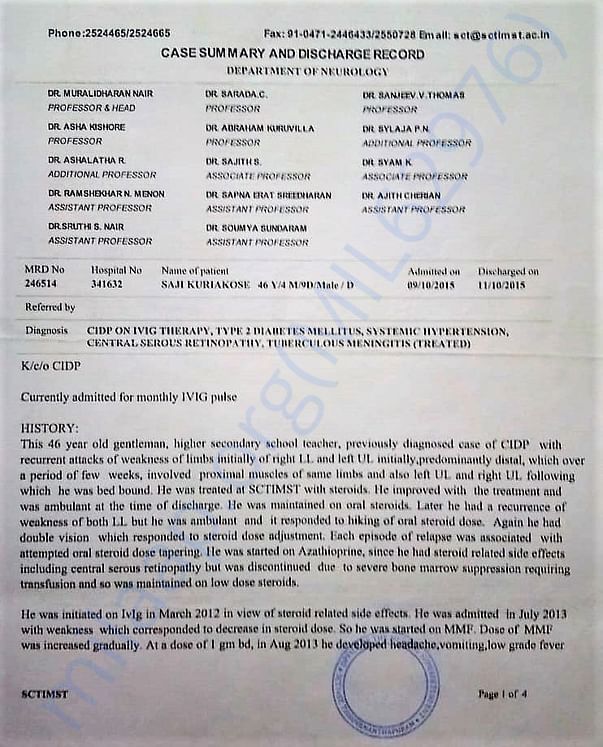 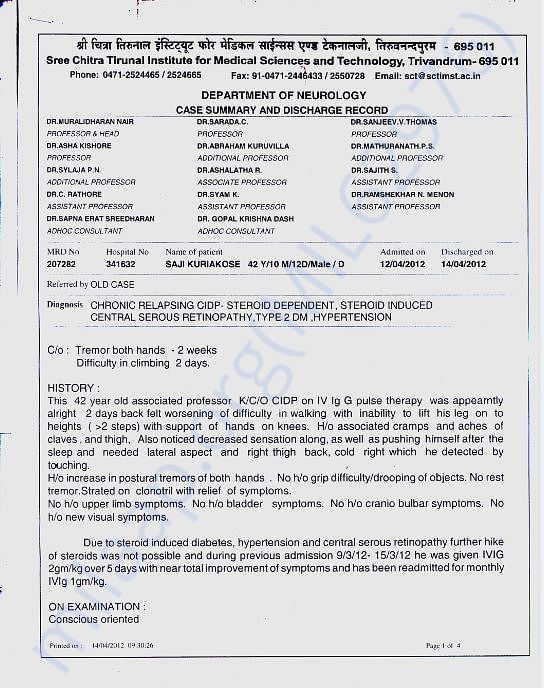 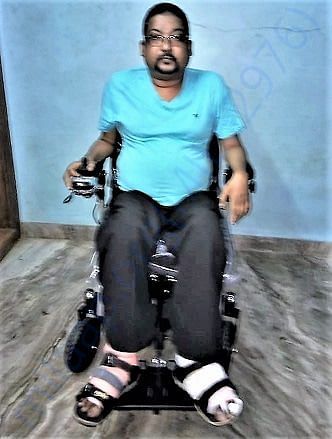 Degree of Doctor of Philosophy in Physics from Sundaranar University 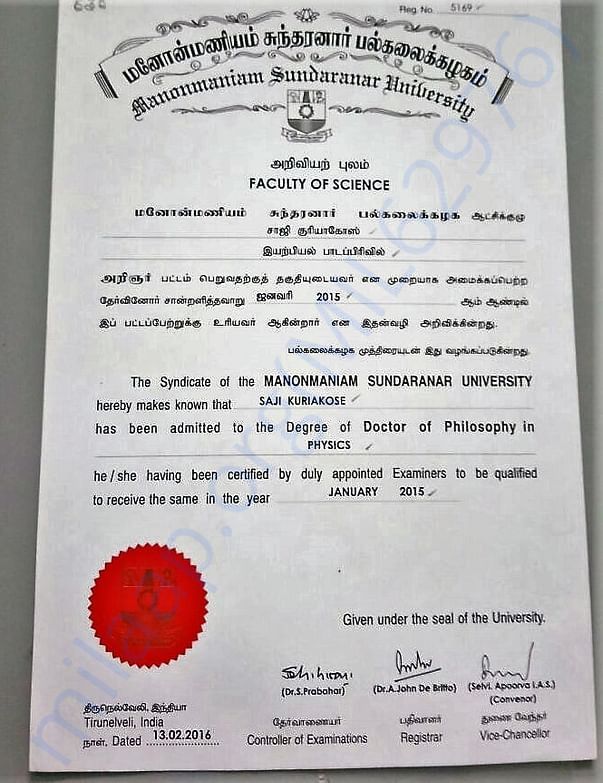 UPI: givetosajikuriakose@yesbankltd (Copy to clipboard)
Or
Click here to read the instructions before you make a bank transfer.

Saji has a slight improvement after the first IVIG treatment at Caritas Hospital,Kottayam. He will be continuing his treatment for next several months. Hope he recovers soon. Keep him in your prayers.

Report fundraiser
See how thousands are crowdfunding for their causes on Milaap
Content Disclaimer: The facts and opinions, expressed in this fundraiser page are those of the campaign organiser or users, and not Milaap.
Rs.539,922 raised

Donated to this campaign via Paytm? Click here if you can’t find your donation listed below.
Cc
Chia donated $7

Donated to this campaign via Paytm? Click here if you can’t find your donation listed below.
Cc
Chia donated $7

S
You are sending a message to
Sreekumar
Go back 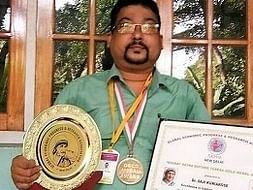