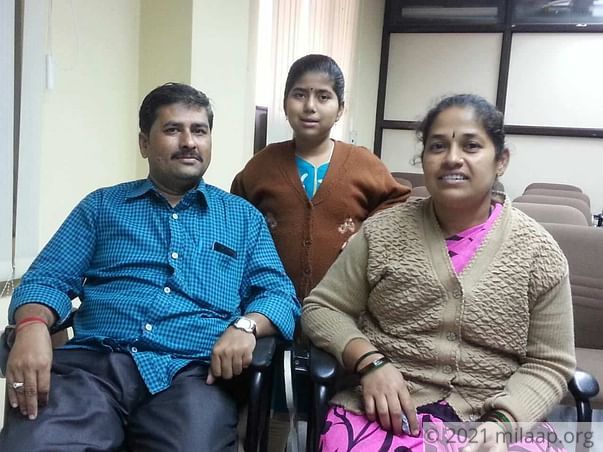 “My wife (Sharada) and I are tailors. We work at home to stitch or alter clothes for people in the neighborhood and then go to a readymade store nearby where we do the same thing all day. I get paid about Rs. 2000/week. She gets less than I do, even if we work the same number of hours. It is a gender issue. With this money, we raise our two children, Rahul and Rajeshwari. Our family means the world to us. It has not been easy, and not because of the wages.
Rajeshwari was born with a hole in her heart or so we were told. We realized when she was a toddler. She had trouble breathing. The doctor said she needed a surgery, and we had to beg for the money required to fund it. After the surgery, she continued having trouble. I went to so many hospitals, everyone said she was fine. Recently, I discovered that she is far from fine.

10 years old, Rajeshwari began having shortness of breath. The school is just a few houses down from our house. Still, she could not walk. She started coughing a lot. I rushed her back to the hospital. They said her condition was serious. The surgery had not worked, and this time, she had a valve issue too. The doctor told us that we need to prepare for a surgery soon otherwise we will lose her.
Rajeshwari does not know about her condition. Even though she is 10, she is in 1st standard. This disease has taken years of her life. She is stuck while her friends have moved on. We are afraid that her life will be over before she gets a chance to live it. I thought I saved her once. This time, I do not even know if I can afford it.” – Mohan, Tailor, Bangalore.

Your contribution can save Rajeshwari’s life.