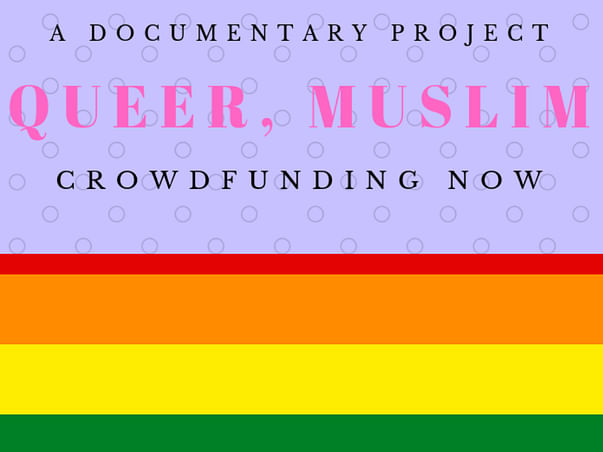 In India there is a community of people who are forced to live double lives. These people are under constant threats of excommunication, sexual violence, alienation from their families and even getting murdered. These are Queer Muslims (Muslim LGBTQ).

And this documentary daringly intends to go deep into the belly of the community to explore this hidden world, where no camera has gone before. This is not just a documentary. This is an attempt to give voice to the oppressed and hope to the desperate.

This will be a very essential film on the protection of human rights of these people.

India is a country of 1.3 billion people of which an estimated 200 million are Muslims. LGBTQ Muslims fairly form on an average the same percentage of the population as any other religious affiliations (a very conservative estimation puts it around 10%), which makes up about 20 million people (roughly the population of Romania).
But most of these people live under constant fear from their own family members and their community.

Having interacted with the gay community exploring the narratives for my screenplay, I have encountered a massive hidden world of sexploitation, rape, out-casting, disowning, exorcism, religious bigotry leading to deaths and even murders. While there are those who leave Islam with a profound conflict, there are also positive stories of acceptances and re-interpretations of scriptures by the clergy. There are underground support groups and online groups who work towards helping each other from this community.

This documentary intends to explore all the above themes and more of oppression and hope among LGBTQ Muslim community.
Why Crowd-fund the project?

This is a lonely battle for us. Why?

There are hardly any government/private support for documentaries in India. Films Division which was the voice of freedom in Indian documentary space has been dysfunctional for a while now. Others do not fund a documentary like this that is likely to get an A (adult) certification from the feared Censor Board of India and likely to cause controversy. Who wants their names associated with a controversial film, although honest and timely?

This leaves us with pretty much the only option of crowd-funding the film. Without the support of the caring, responsible people like yourself, this project will never come into fruition.

What can you do?
How will you be helping us?

The money you contribute goes towards the expenses of making the film that includes Research and resource people from within the LGBTQ Muslim community. The rest of fund is utilized in making this documentary film.
We’re seeking 600,000 INR.
So, what do you get in return?
Foremost, the satisfaction of being a part of a great cause. Second, no matter what your investment is on this film, you're an equal producer which makes you a shareholder on any money the film makes, proportionate to your investment.
But, note that this is not a for-profit project.
So, will this film make money?
Again, this is not a for-profit project. However, films like this have been sold before to various distribution and VOD platforms such as Netflix.
And there's a real good chance of a documentary like this winning multiple awards with financial rewards.

And every single investor is eligible for a share of this earning.
So, who’s producing/directing the film, again?

Co-Director of this documentary is Rashid Sheikh (assumed name), a queer Muslim, who had to go through painful Ruqya (exorcism) and Hormonal Therapy, once he had to come out as Gay to his parents.
Rashid Sheikh will also act as the main consultant and research person on this project, as a man with inside knowledge of the Muslim Queer world.
Prithvi Konanur is an award winning Indian film director/producer/writer whose films have been screened, nominated or awarded at prestigious film festivals such as
To know more about his latest film Railway Children, visit https://en.wikipedia.org/wiki/Railway_Children_(film)