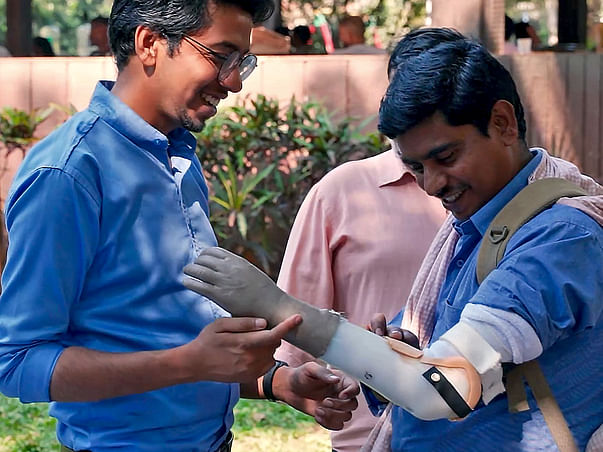 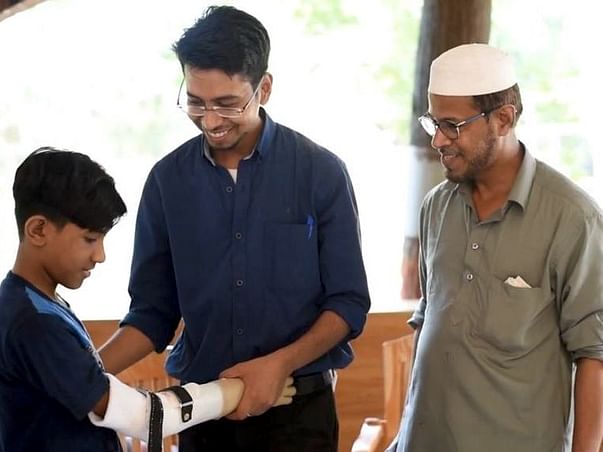 Previous Next
Prashant Gade and his team are trying to bring a difference in the life of people living without arms in rural areas of India by providing them prosthetic arms for free under Inali Foundation. At Inali Foundation, individuals, beggars and especially people who do not have any financial support are provided electronic arms for free.

In 2016 Prashant Gade got the chance to meet a 7-year-old girl who was living with missing arms and which touched this 23 yr, old boy. So, he decided to gift two prosthetic arms to her and went to a company to purchase two prosthetic arms and everything was changed for him when the company quoted Prashant 24 Lakhs for two arms. The second shock for Prashant was that every year nearly 40,000 people lost their arms and at present 500,000 people are living with missing arms in India and out of which 85% of people are living without any solution just because they can't afford these expensive arms. So, Prashant decided to drop his job, and graduation to create an affordable electronic prosthetic arm.
Prashant, with his all research, created an affordable arm which could be given for free through support from NGO's or Individuals. There are many people for whom just because of their social and economic conditions it becomes difficult to get the proper prosthetic care they deserve, getting an arm could change their life and help them to get back to the society.
So, Prashant and his team travel to rural parts of India and organize free electronic arms distribution camps every month and provide the arms to people in need. Till today more than one thousand arms have been given for free through Inali Foundation by the support of NGO's and Individuals.
There is always a question " how Prashant and his team survive? ". So, Prashant has created few designs of arms that are also affordable as compared to those thousand dollars arms and to sustain they provide those arms at a nominal cost to those who can afford them.
Prashant and his team are looking for your support to provide better prosthetic care to 500 people by giving them free prosthetic arms.
Funds are required for the following expenses :
1. Cost of arms provided for free every month
2. Cost to arrange accommodation and food for those who reach to camps from long distances.
3. Cost to arrange travel means to reach the places of camps, which will be mostly in rural areas.
4. Cost of other diagnoses which could not be performed in local regions.
Your support will help Prashant and his team to continue their work to provide free limbs to people in Need.
You can also help them by spreading the word , help them to reach many to help many !
Prashant and his team are collecting the information of the patients who are in need for the hands- https://docs.google.com/forms/d/e/1FAIpQLSfCbmdclSTK5-0Oytmtixt7V9naKlrnZ5PHhNC55Jz49wwuxQ/viewform?usp=sf_link

UPI: rzpy.givetomlpinali000001@hdfcbank (Copy to clipboard)
Or
Click here to read the instructions before you make a bank transfer. 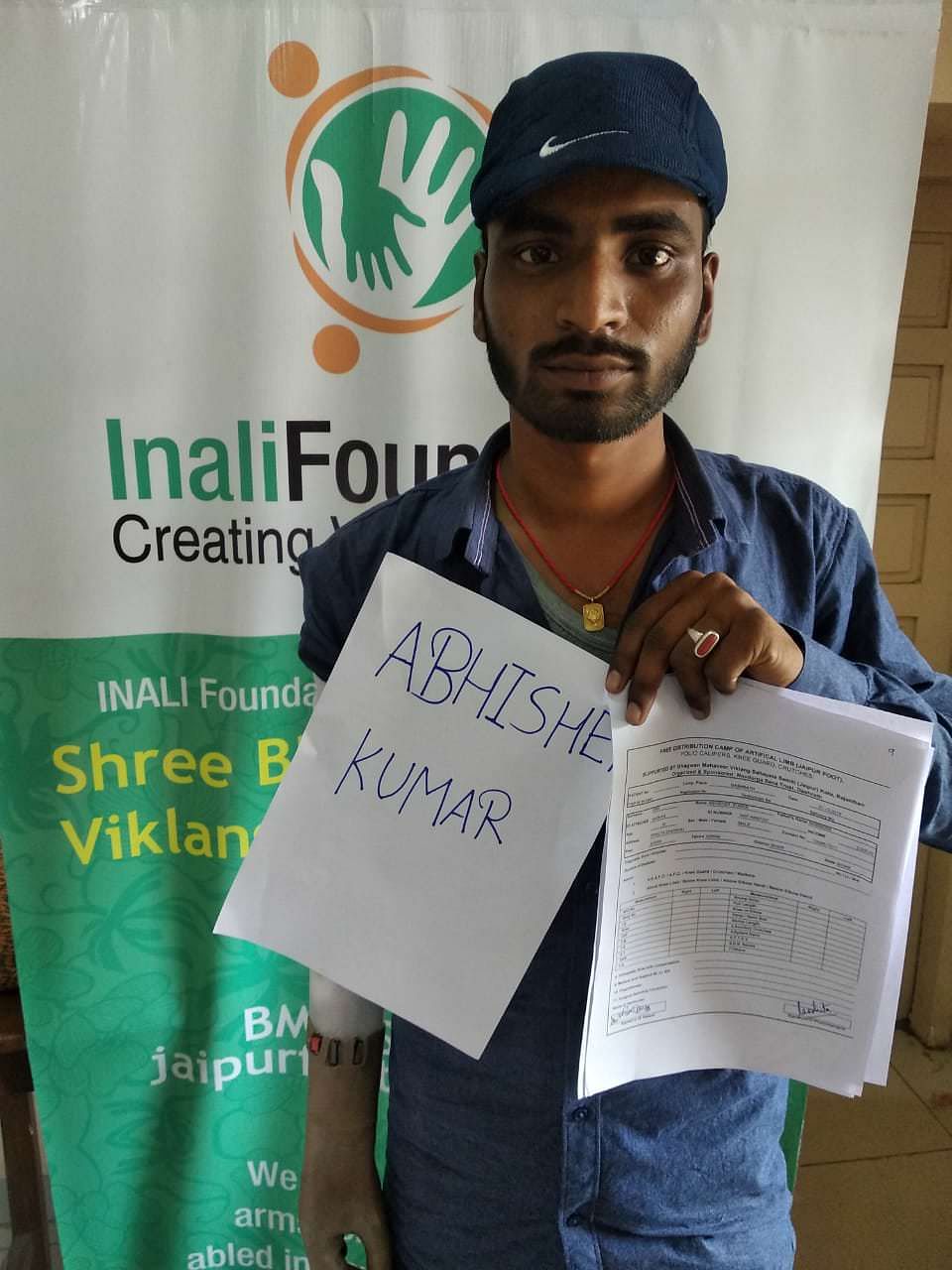 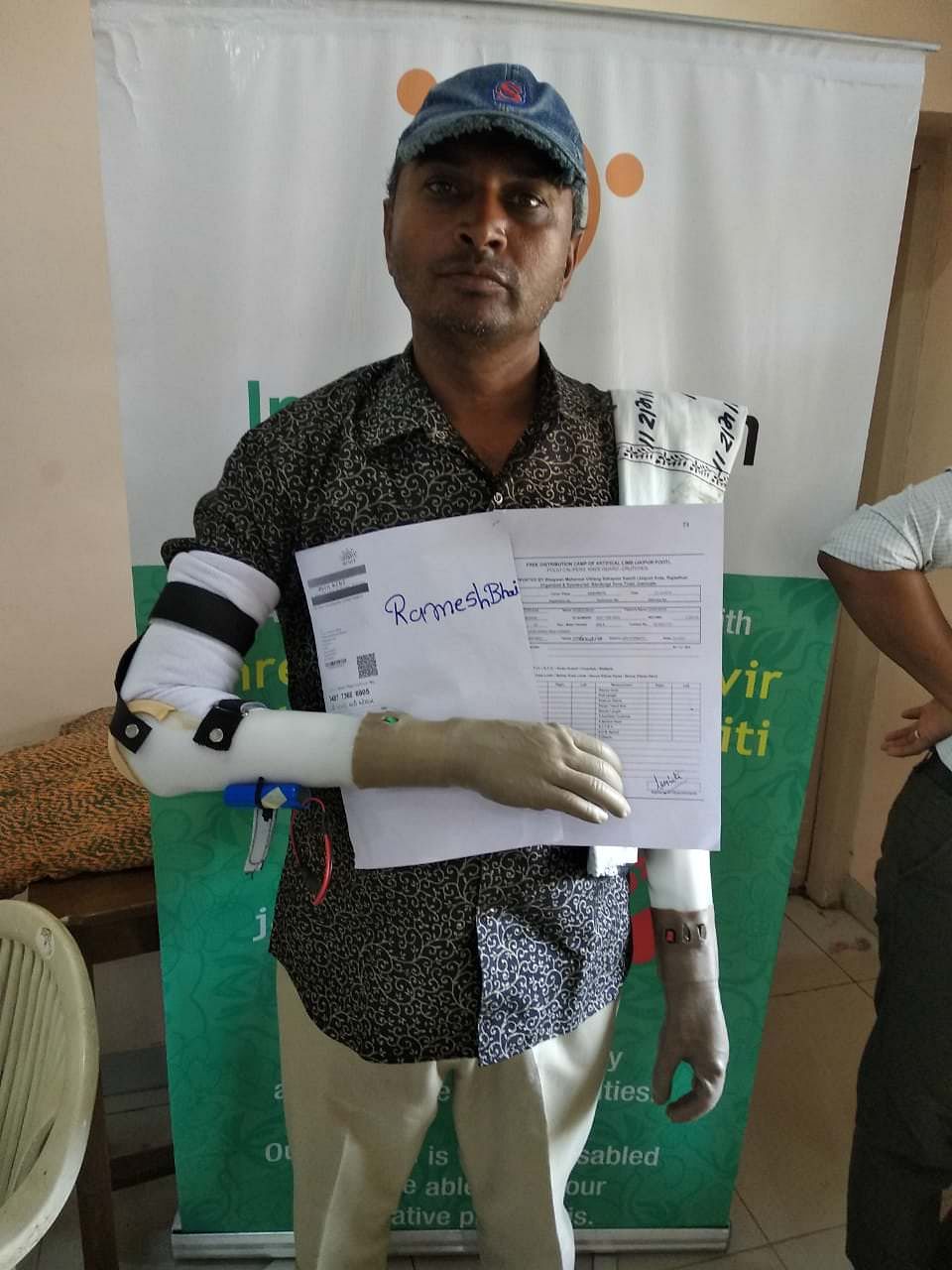 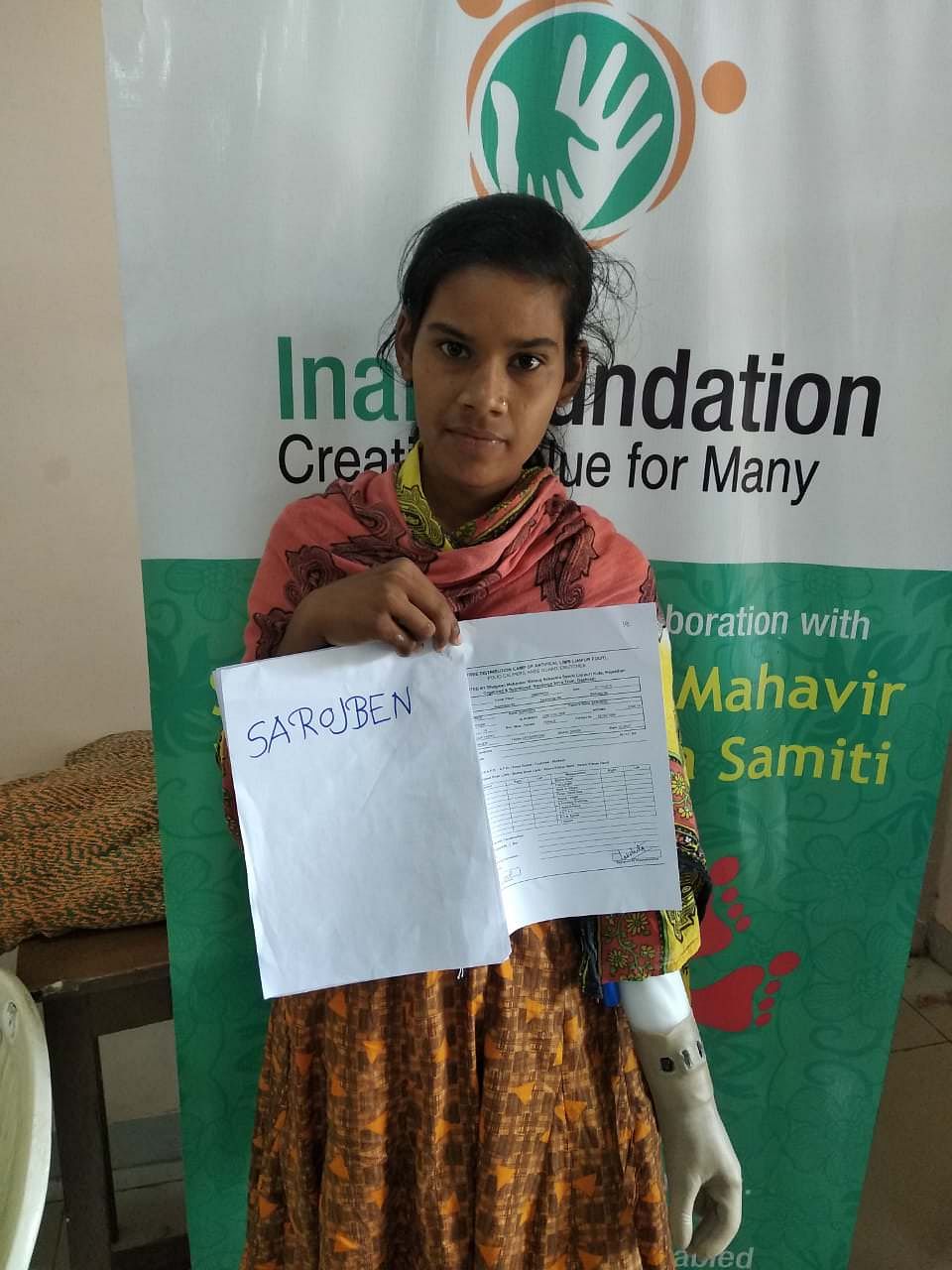 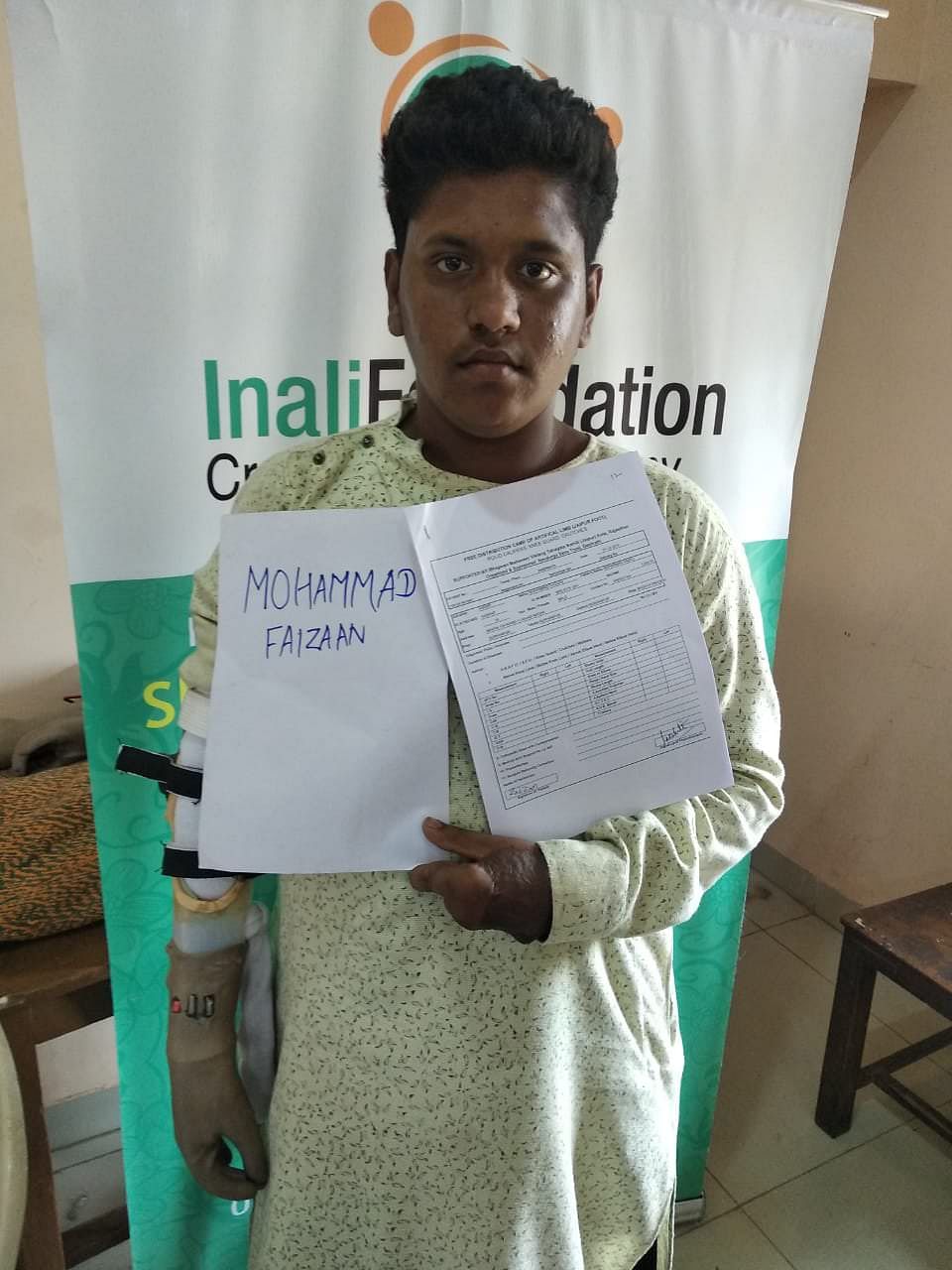 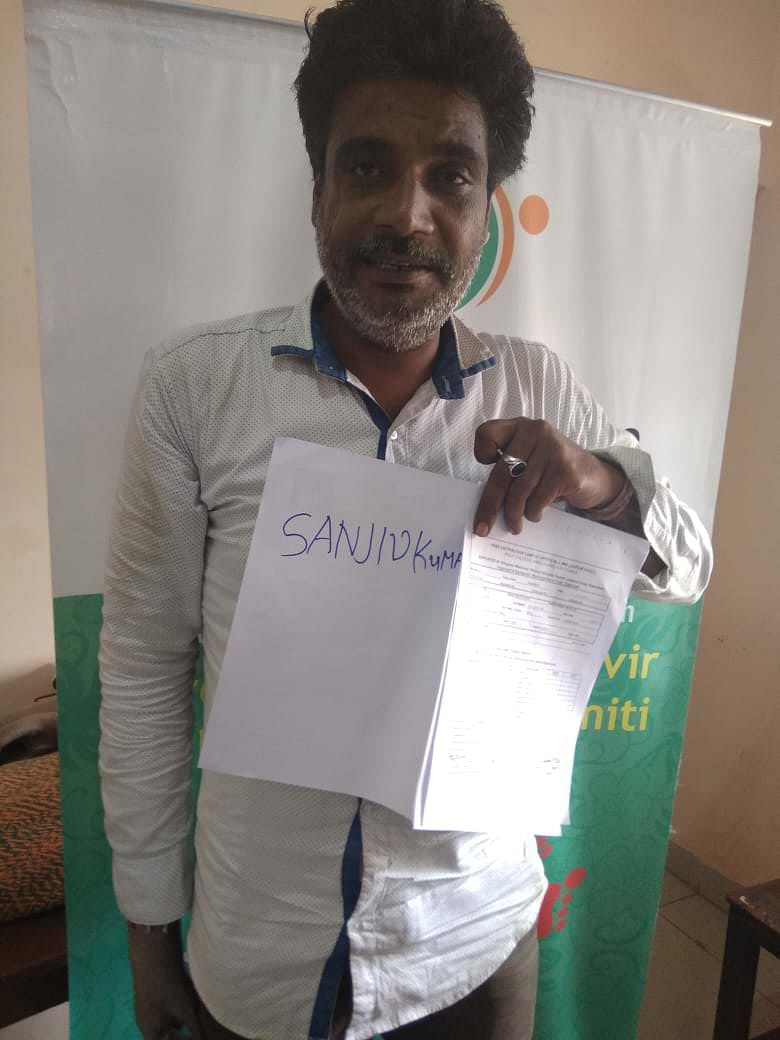 Thank you for your overwhelming support throughout. As mentioned earlier, I'm sharing the pictures of the patients to whom we have able to support so far.  Please feel free to reach out to our team in case of any queries.

The funds has been utilized by Inali Foundation through out the campaign is 3,500,000.00 for the following purposes.
1. Material cost for the production of 200 Hands
2. Food and stay of the patients coming to organization for getting the arms.
3.Transport Expenses

You can find more related pictures through this link
https://drive.google.com/open?id=16AnmMIpoVWarpX3t1WZAGvqPvibTO-oZ 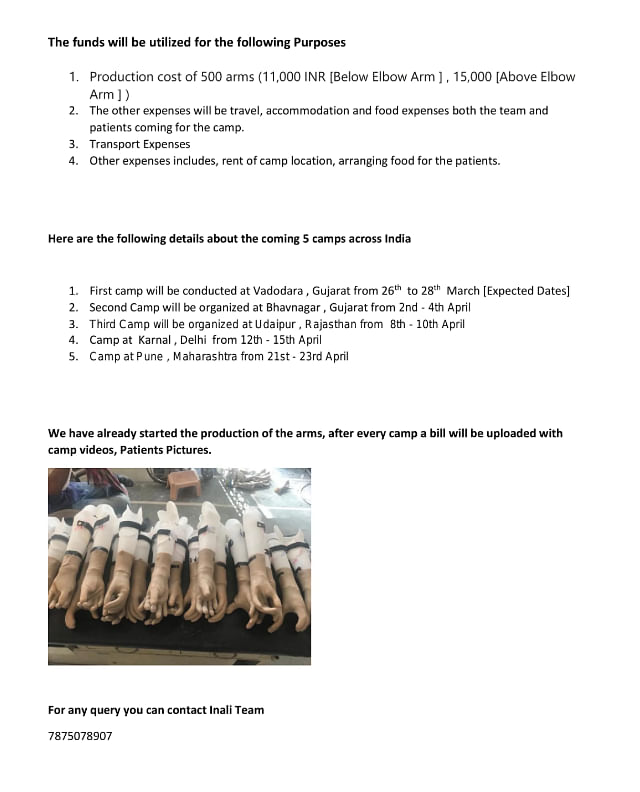 Thank you for your overwhelming support throughout. As mentioned earlier, I'm sharing the current plan here for your reference.We are all very hopeful of this being a success. Thank you again. I shall keep you posted with pictures from the camps. Please feel free to reach out to our team in case of any queries. 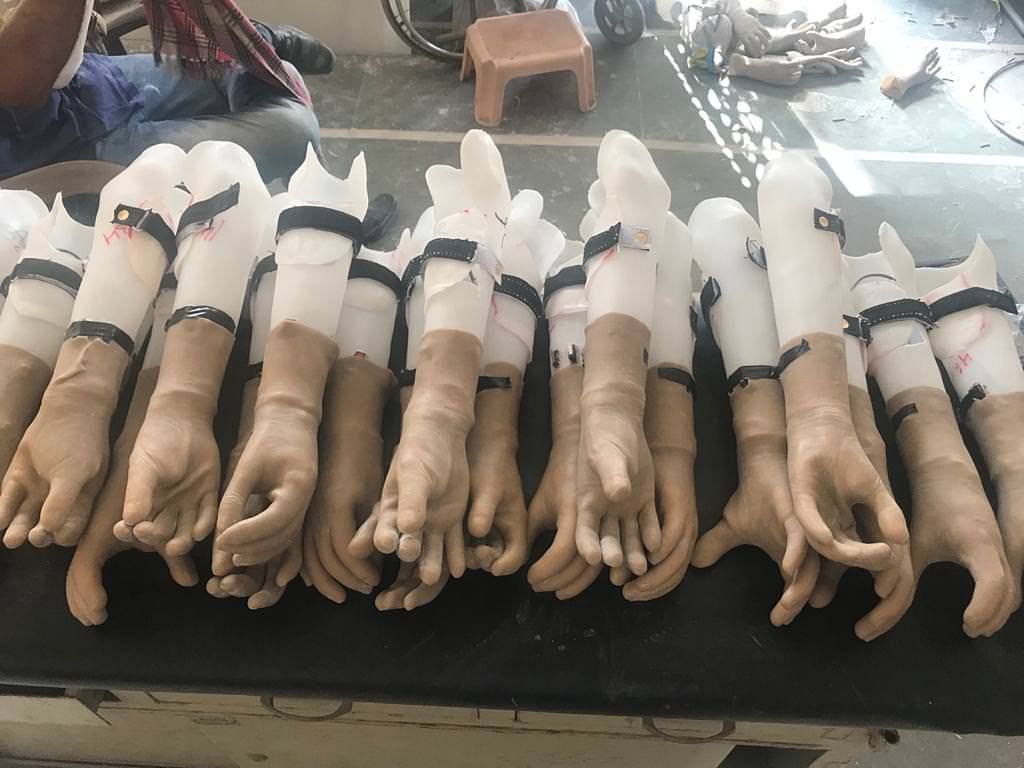 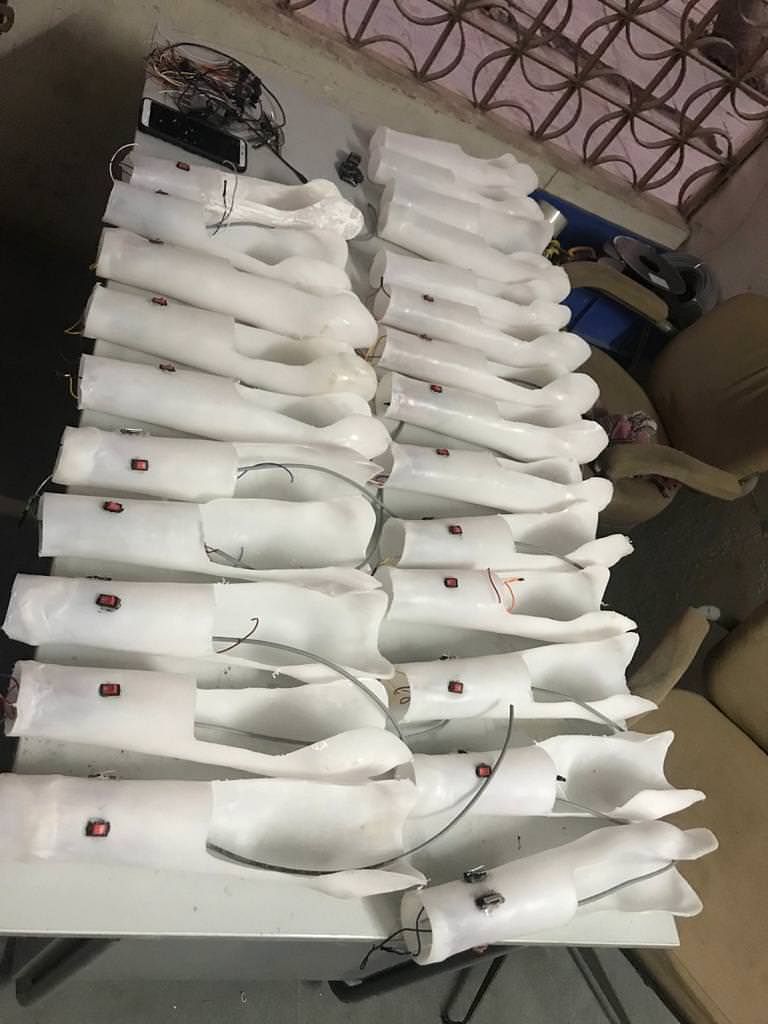 Thank you all for the support you have provided us through this campaign. We are grateful and humbled.

The number of responses we are getting has really motivated us in our efforts and we are trying our best to reach out to maximum people in need of help. As far as our work is concerned, we have started the first phase creation of prosthetic arms. The distribution of which will soon start! We are all set to go, thanks to all the support that you have given once more.  I will keep you posted with the latest update!

Your are doing such a great work dear, God will bless you. A small amount of contribution.

You are doing a noble deed. Remember that definitely bless you and will sway away alll your worries.

Great job! All the best!

Your work and thoughts really inspired me. Good luck

Thanks Prashant for keeping humunity alive ...

Your are doing such a great work dear, God will bless you. A small amount of contribution.

You are doing a noble deed. Remember that definitely bless you and will sway away alll your worries.

Great job! All the best!

Your work and thoughts really inspired me. Good luck

Thanks Prashant for keeping humunity alive ...

You are sending a message to
Prashant Gade
Go back 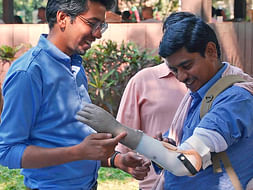