25 year old needs your help to fight Hodgkin's Lymphoma. | Milaap
This campaign has stopped and can no longer accept donations.
Milaap will not charge any fee on your donation to this campaign. 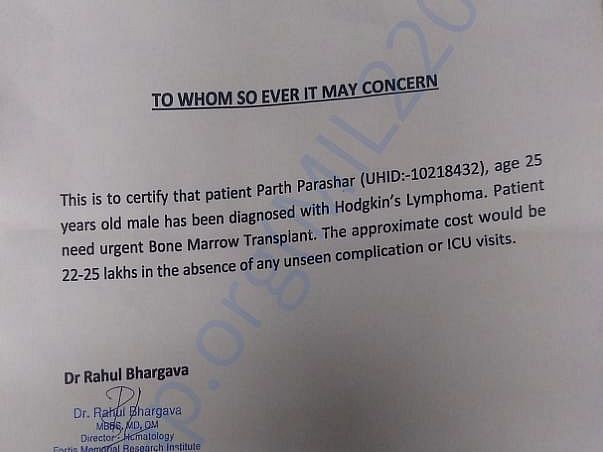 Dear family, friends, acquaintances and everyone reading this story,
We, the family of Parth, on behalf of him would like to thank you for taking out time for us.

We write to you all to seek help for a young boy, 25 years old, who faced an unfortunate circumstance. It all began in October 2018, when Parth was first diagnosed with Stage III Hodgkin’s Lymphoma (Cancer) when he was still in the second last year of his college, (Batch Y-15) LNMIIT, Jaipur.
He then underwent 12 cycles of Chemotherapy and was cleared for remission after a clear PET scan report in March 2019.

With help from his friends and faculty at LNMIIT, he was able to successfully complete his graduation.  After two months he had a relapse of the disease and was getting treatment at Rajiv Gandhi Cancer Research and Institute Centre, New Delhi, where he was given Chemotherapy (ICE) and targeted Chemotherapy which was sourced from the USA.

Following this aggressive session of Chemotherapy, he had to go through the Autologous Bone Marrow Transplant in September 2019. Till then we had already spent approximately 24-25 lakhs.

After being cleared for the period of remission by the doctors, he completely revolutionized his lifestyle. But in spite of all his efforts to prevent cancer from evading his body again, in February 2020 he was again met with his enemy, cancer and the doctors told us that the subsequent relapse indicates that the Cancer is Aggressive.

After meeting several doctors around the country, we were advised for an extremely risky and aggressive treatment procedure. Tired of the failure to fight cancer, again and again, Parth decided to go for an alternative therapy for 6 months but after following the protocol dedicatedly, the cancer is too aggressive had spread along with a severe fall in his Platelets counts and bouts of high-grade fever.

On admitting him at Rajiv Gandhi Cancer Research and Institute Centre, New Delhi where his previous treatment took place, he was diagnosed with prominent hemophagocytosis and increased megakaryocytes (bone marrow was not making platelets) in the Bone Marrow and the cancer was still in his body.

After all their efforts, the doctors advised us to take him somewhere else for further treatment. Till then we had already spent 6.68 Lakhs. We then shifted Parth to Fortis Memorial Research Institute, Gurgaon where after further testing he was also diagnosed with Secondary HLH and Acquired Haemophilia which had caused his condition to further deteriorate.

But after consistent efforts by the doctors and the prayers of family, friends and our acquaintances, he was given sufficient medicines to stabilize his situation. At Fortis Memorial Research Institute, Gurgaon we have already spent 11 Lakhs.

But the further course of treatment requires us to be even stronger and determined. Most importantly, it now requires your help to save Parth and give him a chance to live a normal life. The doctors have advised Parth for another Allogeneic Bone Marrow Transplant, which excluding any emergency situation would approximately cost us 25 Lakhs (Estimated Budget for the same provided below).

Parth is a religious and spiritual boy, with no history of consumption of alcohol, smoking or any other harmful substances. He was admitted at Rajiv Gandhi Cancer Hospital for 12 days and 20 days at Fortis Memorial Research, Gurgaon. Parth’s platelets are still not responding and since the past 2 months he has been getting transfusion.

We would like to thank all those who came forward to help us till now. We now need your support, courage, and strength to fight this disease which has led to several other health complications for him. We need your prayers and wishes so that Parth can have another chance at a normal life.

Our savings have exhausted and in spite of all loans we could possibly take, we cannot reach the goal amount. We write to all of you to please donate wholeheartedly and with all your blessings so that each donation works wonders for his health. Parth has a month's time before he begins this extensive treatment, please donate as much as you can.

Please spread the word amongst all your friends, families and relatives. 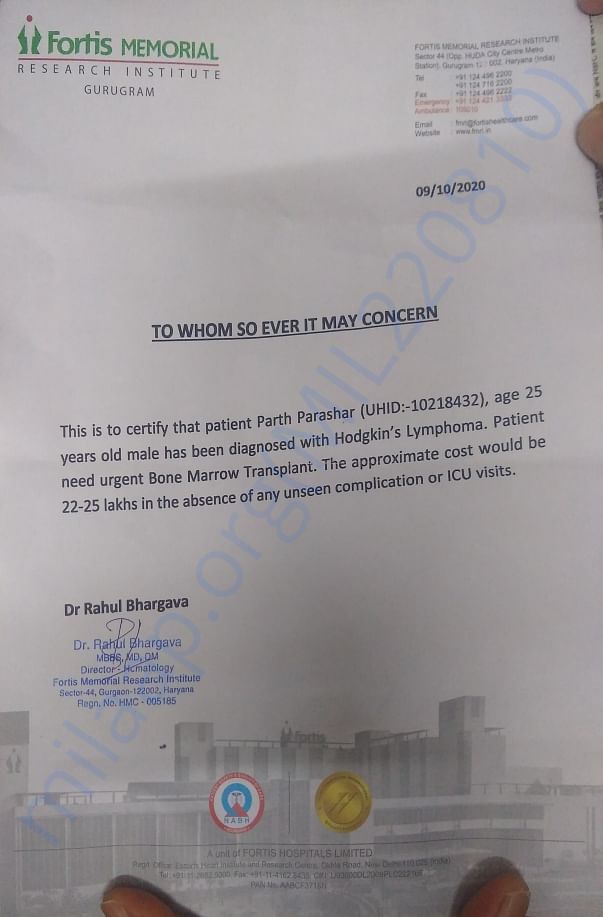 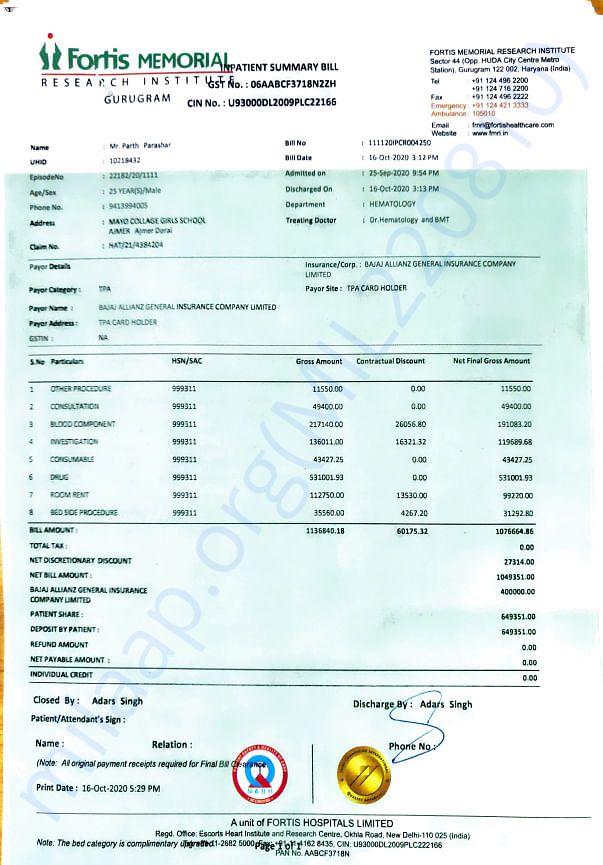 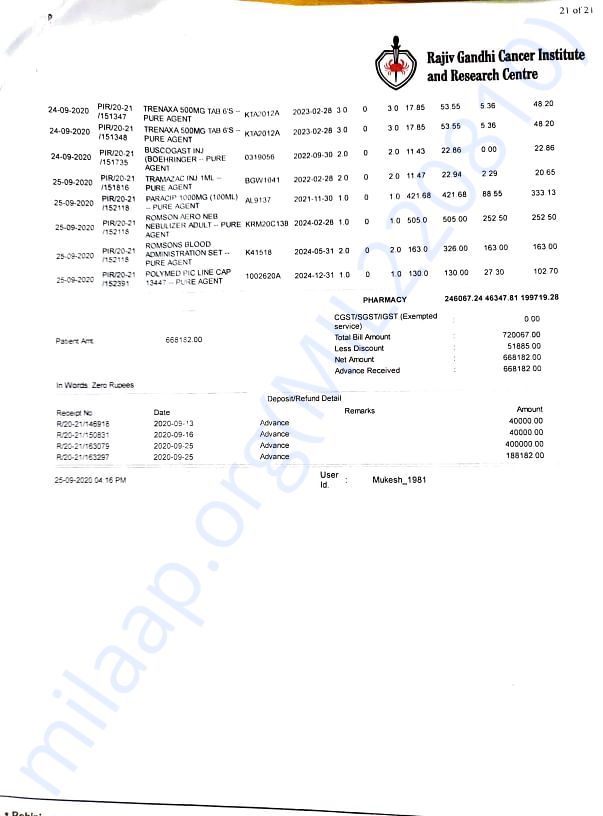 Summary for disease from Fortis, Gurgaon 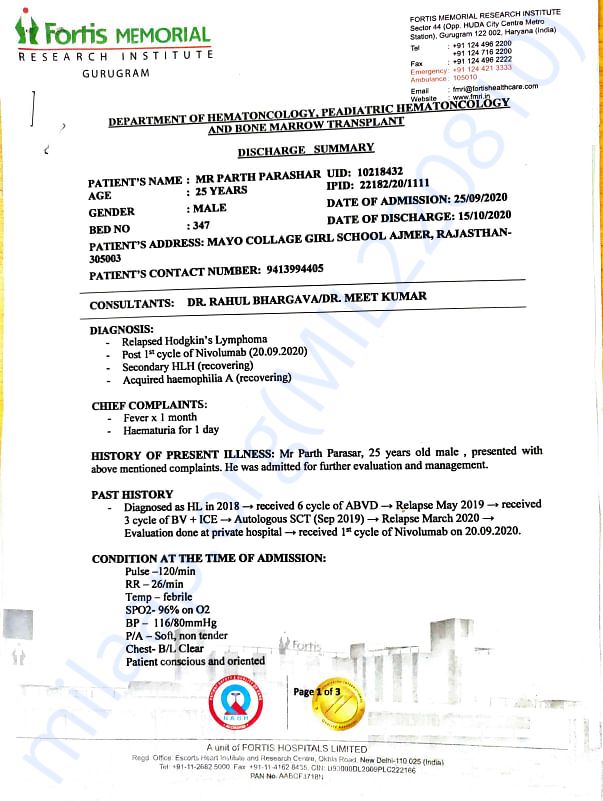 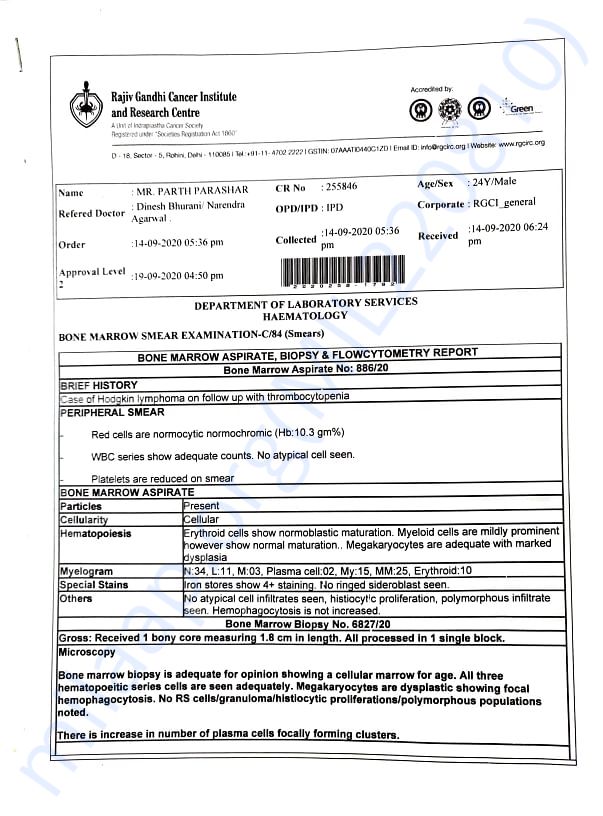 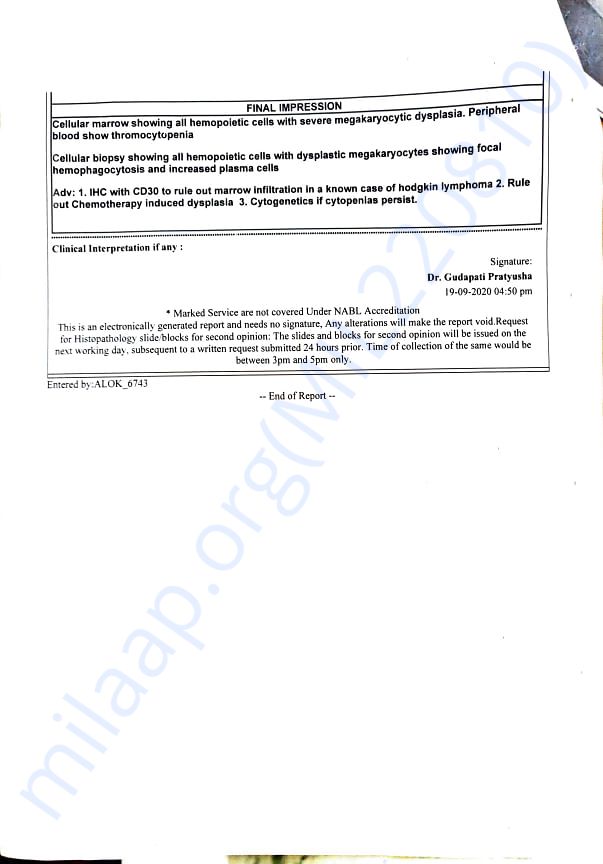 We write to you to thank you for your immense and heartfelt contribution towards Parth's treatment. We are extremely grateful to have your kind support, blessings and prayers. Parth has been keeping well till now, by God's grace. But on 11th November, 2020 both Parth and his father tested Positive for COVID 19. Due to this even his Bone Marrow Transplant which was scheduled to take place after Diwali was pushed further till he recovers from this episode. He has been taking treatment from Fortis Hospital, Gurgaon by Dr. Neha Rastogi. Due to COVID 19 he has a patch in his lungs. It has been tough for him lately since he was already really weak due to his previous rigorous treatments. Please keep praying for him, so that he recovers fast from COVID 19 and emerges victorious from his fight from Cancer. Feel free to contact us whenever you want to be updated regarding his whereabouts. You can always drop an email on 1190parashar.kanupriya@gmail.com.
Thank you for all the love and support.

Due to your kind contributions, love, affection and the extra effort which each one of you made to share our fundraiser, we have reached our goal amount. This is really emotional for us because we had never imagined to receive such an overwhelming response for Parth's fundraiser. He is really happy to see so many people standing by him, supporting his family and giving him blessings to fight this disease. We would like to personally thank his college friends, faculty and Almuni, his batch mates from Mayo College and the Alumni and teachers, our acquaintances and all those who didn't even know him but made contributions to the fundraiser. Within two days, the amount of support which everyone gave us, we shall be forever obliged to you. Parth will have his Bone Marrow Transplant either before or after Diwali, as this would be decided by the doctors. It is going to be a risky procedure and he will have to fight with valour. Please keep praying for him and sending your warm wishes so that he recovers fast. Thank you so much to each one of you. We are grateful to all of you🙏🏻
Dear Supporters,

Thank you for all your love and support.

To support more towards this cause. Milaap is offering a 10% matching on all the funds until the funds last to help raise funds faster towards Parth's treatment. Every payment that happens 10% will be added to that payment. For example, Rs. 1,000 will receive an additional Rs. 100 matching contribution to the campaign.

You can help by
Clicking on the donate now button:
https://milaap.org/fundraisers/support-parth-parashar-1

Please continue supporting and do share the campaign with your friends and family.

Scan & donate with any app
check_circle_outline Download payment receipt
Report fundraiser
Know someone in need of funds for a medical emergency? Refer to us
Rs.2,768,909 raised

Hope to play tennis with you soon !!!!

Hope to play tennis with you soon !!!!

You are sending a message to
Kanupriya Parashar
Go back 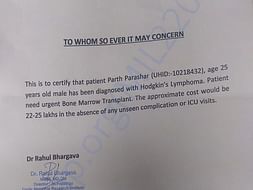