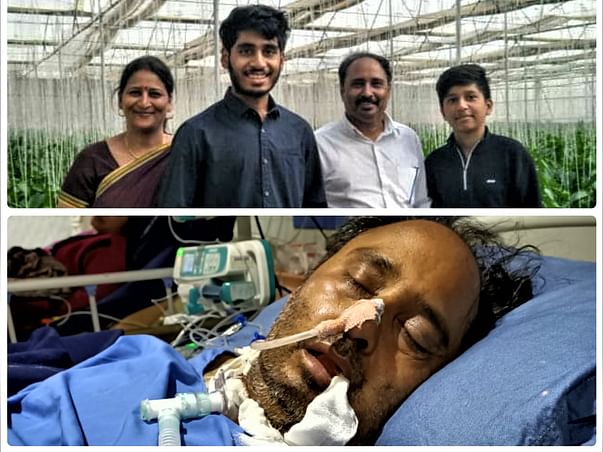 Share
I am Chetan Barange, a BA 3rd year student from Bhopal(M.P). My father Netram Barange who has a small agro-business, he started getting severe symptoms(blood & mucus) of Oral Cancer five months ago around November'19. Even after getting checked by several dentists they couldn't identify Oral Cancer(Mouth Cancer). After only a month on 21st Dec, we found that he is suffering from Stage 3 mouth cancer: Carcinoma Buccal Mucosa. and even worse is that it grew to stage 4 in just a week.
On 28th Dec a surgery was carried out in Lake City Hospital which costed 3 Lacs. Then a tragedy happened while he was in ICU, he suffered a cardiac arrest on 30th Dec and oxygen stopped reaching his brain causing Brain Hypoxia. I was only able to last communicate with him on 27th Dec. And after getting brain injury he lost consciousness and is now unable to recognize or react to any familiar face, possibly memories are lost which is common in Hypoxia. On that very day we transferred him to Bansal Hospital as there was no cardiologist in Lake city hospital. In Bansal Hospital every day costed 50 thousand Rs. So due to exhaustion of all expenses from savings and help from friends and family we had to get him discharged after 14 days in Bansal Hospital, which costed 7 Lakhs in total. We transferred him to Silver Line hospital and he was there for a week which costed 50k and there they told that he had very less chance of surviving and we again had to transfer him to Gayatri Hospital and Trauma Centre. He was admitted for a month here daily tests, medicines and physiotherapy in total costed 4 Lacs.
After a month the doctor suggested it is better to take him back home until he regains his consciousness, because after that Chemotherapy and treatment is possible . It can take up to 5 months for his consciousness to come back and until then 30 thousand Rs per month is required for his medication. The worst thing is that till now no progress in treating the diagnosed cancer has happened and we barely have any source of financial help. But I have hope that he will regain consciousness and we'll be able to get chemo and it will cost 5-15 Lacs depending upon the then condition and type of treatment required. This fundraiser is my last hope, please help my father.
We need the help for his medication which will be for around 5 months and Chemotherapy.