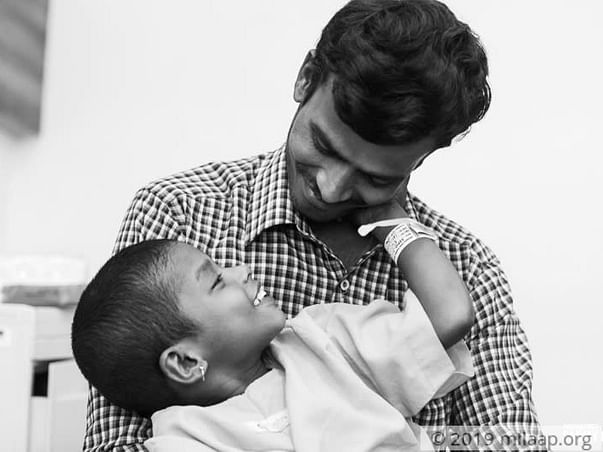 It’s been 3 years since Mani slept through the night. His parents can hear his skin tear as he scratches in the darkness for hours. They tried neem paste, burning neem oil, and managed to buy Odomos. Nothing helped. They thought mosquitoes were unusually attracted to their son. In the time lost with all these remedies, Mani’s liver kept failing. The itching is from liver failure. He now does not have much time left to get a transplant.

After 3 years of pain, Mani received his diagnosis 6 days ago

“Every doctor we went to in our town said that the itching is from mosquito bites. If someone had done even one test, we should have known that he had jaundice.” – Krupa (Mother)

Mani has always seen yellow eyes in his reflection. His parents thought that was normal. He noticed that his younger brother, Bala was not yellow, and often asked his parents whether Bala is sick. They only worried about his skin. He would bleed throughout the day from itching. They had to bind his hands sometimes. Only 6 days ago, in a Hyderabad hospital, the family discovered that Mani’s liver is completely damaged. He can survive only if he gets a liver transplant.

“I cannot pay for his treatment. He will die if I don’t find the money.” – Seetharamaiah (Father)

Playing ‘Snake’ on his father’s second-hand phone is the only thing that distracts Mani from the pain. It does not even have a camera, and yet sometimes he pretends to be a photographer taking his parents’ pictures. They do not have money for a data pack. They do not have enough to make an emergency call to the doctor. Seetharamaiah works as a laborer on a farm for Rs. 300/day. He spent his savings on Rs. 5000 on the travel to Hyderabad from Alluru and back. He is worried about funding Mani’s transplant.

“We are supposed to go to the hospital tomorrow and admit him. What is the point in going if I cannot pay for the transplant. I cannot even be tested to be donor.” - Seetharamaiah

Seetharamaiah is the potential donor. The sad truth is, he cannot do anything about his son’s survival unless he has the funds required for the transplant. He has been knocking on every door in Alluru asking people to spare Rs. 10 and Rs. 20. Mani does not have the time it would take for his parents to gather Rs. 25 Lakhs.

Mani trusts the doctor who told him he will be fine. Mani asks why they are not at the hospital where the doctor can stop his pain. He is still sleeping for less than 2 hours a day. He lives on half an idli.

He may not make it past this week, without this transplant. You can save his life.