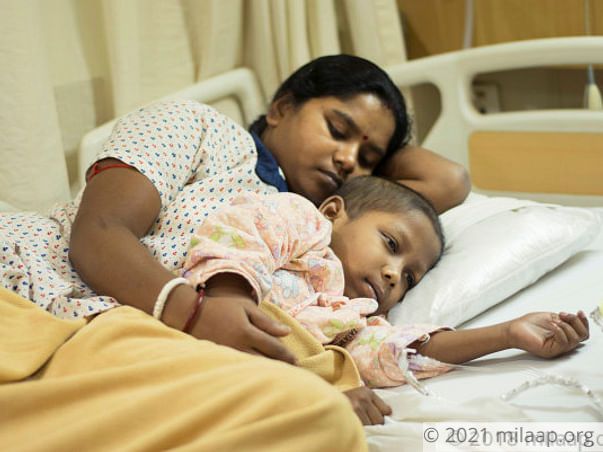 “Five months back I had suddenly got a call from my 7-year-old son, Nayan’s school. He had suddenly become unconscious. He was having fevers for a few days before that. We were giving them medicines. He was immediately rushed to the emergency ward. I thought those 24 hours in front of the emergency ward were the worst, but they weren’t. Knowing that my son might die of cancer is the worst. Cancer has made him weak and silent. I feel like he is silently giving up and that makes me more scared,” Kaushalya, Nayan’s mother.

Little Nayan wants to get out of the hospital, but he doesn’t know that he might not live

It has been 5 months now and Nayan has already lost interest in doing the things he loved. He loved studying and wanted to be a scientist. Now all he wants to know is that if he will ever be able to get out of the hospital. Kaushalya doesn’t know how to answer the little inquisitive mind.

“He doesn’t know what cancer is or what happens because of it. But he knows the name of the disease and keeps telling everyone that he has cancer. It breaks my heart every time to see him say this so innocently. I know it’s not that easy, but by seeing his face I am ready to go to any extent to save him.”

Little Nayan has acute lymphoblastic leukemia, a dangerous form of blood cancer that develops in the bone marrow. Nayan keeps on getting fevers. When he takes medicines, he gets better for a day or two but returns to the bad situation. The blood cancer has made him very weak and he has lost the enthusiasm to do anything. He neither plays much or eats much, he constantly wants to sleep.

“My little son was so chirpy. He would talk to everyone on his way to school. But now he doesn’t even want to talk to me or his father. The only thing he asks us what will make him feel better. He asks me when he will be able to play again. I can’t tell him that the answer is maybe never. His cancer has badly taken control over him and I am scared that I might lose him.”

Kaushalya has to take care of her son single-handedly now. Her husband, Mahendranath comes to visit them from Jharkhand to Kolkata only once in 15 days. He has never been away from his son. Mahendranath cries a little every time that he calls to know about his son.

“My husband is a security guard in a small office in Jharkhand and he earns Rs 8000 a month. Since the time that Nayan fell sick, he works multiple shifts. He barely sleeps. We have already spent more than Rs 3 lakhs in just 5 months. Not just we had to borrow, but we also sold the only property that we had for our son’s future. None of these seem to be enough now.”

Without treatment, Nayan’s cancer can become fatal at any moment

Little Nayan already had 3 cycles of chemotherapy. He need this for almost another year to ensure that his cancer goes away. With the continued treatment, he is getting a little better, but he has a long way to go. His parents have already exhausted all the means. Even their relatives are turning away now. If they don’t get help now, they will have to stop the treatment which will kill him in no time.

7-year-old Nayan has a fatal blood cancer and he needs chemotherapy to eradicate his cancer. Even after borrowing and selling off all that his parents had, they can no longer afford to save their only son. The cost required to save Nayan now is Rs 6 lakhs and his parents have nothing left to save him.