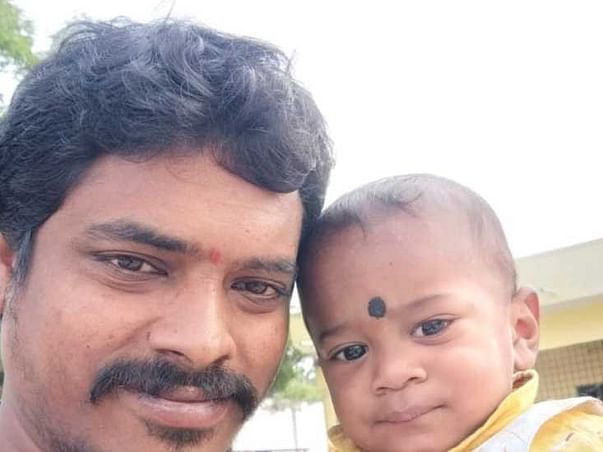 Share
Narsimha comes from Turkapally village in Nalgonda district of Telangana and is the only son to his parents. Due to family circumstances, he had to work in the fields from an early age and was forced to stop education eventually. He was working at a construction site in Hyderabad with a nominal wage. Little did his family expect about a lung disease that he had, which he was getting medication for and trying to fight off.

He couldn’t stop working during COVID-19 too because he’s the sole breadwinner for his family and his 1.5yr old son. He got tested for COVID when he had symptoms of fever and on 19th the result came positive. On 20th August, Narsimha Rao Veeramaneni was rushed to King Koti COVID hospital. Probably because he had the lung disease, he very quickly turned super sick and didn’t get a chance to fight it off and was declared dead in the hospital on 23rd August.

Everyone who knows Narsimha knows that he is an innocent person with a kind heart. He just loves people unconditionally and is one of the best hard-workers that we know. He was always ready to help anyone, in his reach.

Narsimha’s wife isn’t that educated either and is grown up in a village so the only thing she knows is to work in the fields. With all this, the future and life of the little innocent boy is in the air. The burden is on his young mother to raise him, give him good shelter and food, with good education so that he can turn his life around. Needless to say, Narsimha’s parents are equally devastated and it’ll be very hard for them to recover from this.

This campaign is to raise some funds to help this little boy and his devastated mother so that the little boy can get good food, shelter, and eventually good education.