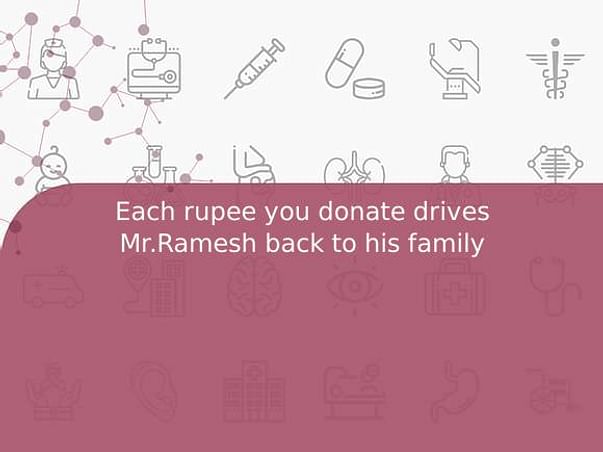 This is a fundraiser for our patient Mr.Ramesh 40/Male who had an ulcerative growth in the right side cheek which turned out to be positive for cancer. 2 years back in 2018 he was operated for the same elsewhere and underwent radiation therapy after the surgery.

Currently, he reported to us after 2 years with a complaint of not able to open his mouth completely and also the appearance of an ulcerative lesion in his right side cheek again.

On examination, his cancer has recurred back at the same site and this time it's affected him worse causing a total shutdown of his mouth. Hence he's unable to eat anything making him totally weak.

Mr.Ramesh is the only breadwinner of his family consisting of his wife and two daughters. He is a driver by profession and highly affected financially due to the COVID Pandemic.

Currently, he needs a larger ablative surgery which involves removing his cheek growth along with the muscles and half of the lower jaw and upper jaw and reconstruction of the defect using a flap from his chest. This above said major surgery will provide him considerable good results and make him lead a relatively better disease-free life with his family.

He had used his Government Insurance cards for most of his previous treatments and currently it is of very minimal use for the proposed surgery.

We have planned to operate on Mr.Ramesh and it can't happen without the help of patrons and donors such as you.

He currently needs a sum of Rs.2,00,000 for the surgery which includes 6-8 hours of Operation theatre charges, 3 days ICU, 8-10 days Hospital Stay along with medicines used.
(This amount does not include the surgical team charges, as we are doing it without the surgical team fee)

Mr.Ramesh is currently being treated by RAJAN ORAL CANCER CENTRE ( Unit of Chennai Dental Research Foundation) registered as a, not for profit entity under Govt. of India (reg.no: 274/2004).

Rajan Oral Cancer Centre is the first of its kind in TamilNadu to provide protocol-based treatments for Oral Cancer and Pre cancers for everyone, evading the socio-economic barrier.