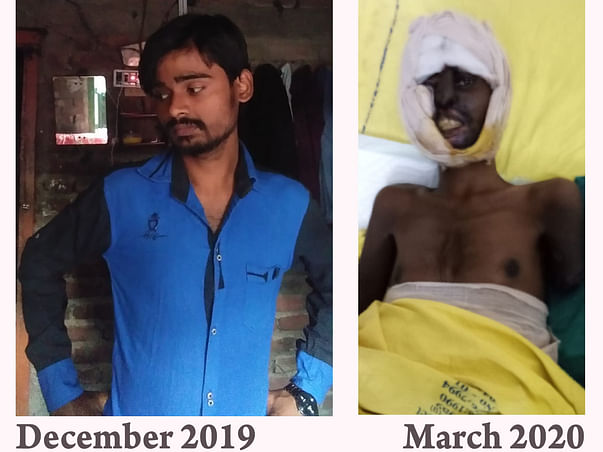 Share
Mofijul Rehman Molla  (aged 31 years and a resident of Magrahat, south 24 parganas) is currently at the M.R. Bangur hospital struggling with his life. No one knew earlier that while attending a get together with his little son at Baneswarpur (1 hour distance from Mograhat), destiny will land them up to such an unfortunate juncture in life.
The incident happened on 5th Jan, 2020 while Mofijul was with some of his friends on the open terrace of a private school building. No one noticed the high tension electricity transmission wires over the adjacent building. Suddenly his 6 year old son Rizwan Hussain Molla playfully went there and met a fatal accident. Mofijul jumped to save his son and in the process also got severe electricity shock and became immediately unconscious. He was taken to Baneswarpur local hospital, from there he was referred to Diamond Harbour Medical Hospital and soon on the same day evening he was referred to M.R. Bangur hospital, Kolkata where he is being treated till now. (His son Rizwan died on the spot)
After 2 whole days, Mofijul gained back his consciousness. The doctors observed that his hands’ condition (which were badly burnt & mangled) are deteriorating. So after 4 days they were amputated, little above his elbow. The damage didn’t end there as doctors at M.R. Bangur gradually turned on to operate his lower back portion and the right side of his face which also had been severely injured and burnt as a result of the massive electric shock.
He sustained several injuries all over his body and had to go through multiple reconstructive craniofacial surgeries. Till now, he underwent around 6 surgeries during this 70 days period all over his legs, face, back and his hands.
As per doctors, he will be kept at the hospital for a further period of at least 2 months. He was the only earning member in his family, his wife is totally helpless and going through a mental trauma after losing their only son and with the terrible suffering condition of Mofijul.
Though the surgeries at Bangur Hospital, Kolkata were free of cost, but his family had to spend around 2.5 lacs till now for taking care of the miscellaneous treatment expenses and he still has a long way to go. He has youth and determination on his side, we all hope that at least he can stand on his own legs and do something that will help him to take back control of his life as soon as it is physically possible. We just wish he can take care of himself and his family.
We constantly wish that someone with a compassionate heart could help Mofijul to get going with his further treatment expenses and enable him to get prosthetic hands that are flexible, so that he could turn back to life. Every little help will be a step to improve his situation and lift his spirits to adapt his life in spite of all his disabilities.