Bodybuilder Champion Struggles To Save His 4-Year-Old Son's Life

“All my life I have helped people understand the importance of fitness. As a trainer, I have helped many get healthy and fit. But now I am helpless before my son's fate. He has a disease so worse that he cannot even lift a crayon because his fingers are completely bent. He was very active, running around the house always. But the same child is now confined to hospital bed. Every day I  pray that my son gets cured of this disease. My faith is all I have left.” - Alok, father

Alok, a bodybuilding champion who has won many competitions is now struggling to save his son who is crippled

Alok has won Mr North India and Mr Delhi titles (second place) in bodybuilding championships conducted by the IBBF (Indian Body Builders Federation) and Sports Authority of India. He was also aspiring to participate in Mr India bodybuilding championship this year but he decided not to participate to support the treatment of his little son who is fighting a rare disease.

Alok married Suman, the love of his life. They have two children 4-year-old Mann and 1-year old daughter Riya. They live in Mahipalpur in Delhi. Alok's dream was to become a bodybuilding champion and participate in International championships but pursuing his dreams every day means his family will suffer. So he chose to work as a trainer at a gym in Delhi and support his family while using free time to prepare for championships. But his life came to a halt when his son was diagnosed with a rare disease.

"Lot of people believed in me and I am glad I got the opportunity to participate and win. Mr India championship was my dream but nothing is bigger than son's life. There is no one to take care of him and I know I have to try everything possible to arrange funds for his treatment."-Alok

Mann before his health started deteriorating

One year ago, Alok and Suman noticed that Mann was having difficulty to move, pick up things or even walk like he used to. Unlike children of his age, he was unable to even hold his favourite toy or play outside with his friends. They took him to several hospitals but no one was able to figure out why this was happening to him. Soon his condition became worse and he needed his parents' support to even use the toilet. Suddenly, one day he lost all movement. Alok and Suman were shocked and rushed him to the hospital.

"When I saw that his hands and legs were bending like a claw I was unable to understand what was happening to him. I took him to different hospitals, but I couldn’t find answer anywhere .” - Alok, father

A local doctor advised Alok to take Mann to a multispeciality hospital in Jaipur, Rajasthan. Mann underwent a few tests in the new hospital. Finally, the doctors were able to diagnose him. Mann has Hurler syndrome, a rare, inherited disorder in which a hereditary factor, or gene, is defective. As a result, patients with Hurler syndrome typically experience developmental abnormalities, various types of organ dysfunction leading to brain damage as the condition progresses.


Doctors suggested Bone Marrow Transplant as a curative option to treat Mann. Fortunately, his mother Suman is a suitable donor for the transplant.

“He stares at his fingers, not knowing why they are bent. He has difficulty sitting for long time now because his spine is affected. Doctors said if the condition progresses, his brain will affected and then he cannot come back to life."- Suman, mother.

Alok is struggling to arrange 30 lakhs needed for the transplant

Both Alok and Suman are in Rajasthan for their son’s treatment with no source of income. They left their daughter in the care of their relatives in Delhi. They need to arrange 30 lakhs for Mann's bone marrow transplant, the only curative solution for his condition

“I cannot imagine a life without my son. I have asked every person that I know, but I couldn’t find help from anywhere. As each day passes, we are scared we will lose him."- Alok

Mann before he fell ill

Alok is struggling to keep his son alive from a rare disease that has crippled him and can eventually kill him. Alok worked hard, sacrificing his dreams to give his son a good life but now he is on the verge of losing him. With your help, this father can save his son's life.

UPI: rzpy.givetomlpmannsehr001@hdfcbank (Copy to clipboard)
Or
Click here to read the instructions before you make a bank transfer. 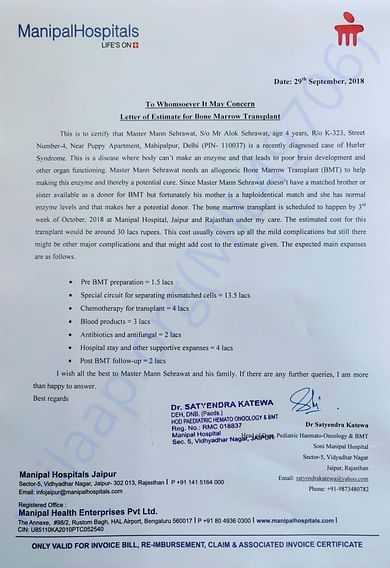 UPI: rzpy.givetomlpmannsehr001@hdfcbank (Copy to clipboard)
Or
Click here to read the instructions before you make a bank transfer.

My son had undergone the Bone Marrow Transplant, but his body rejected the same. He is presently in the hospital under medication and the doctors are deciding how to proceed further.

As a father, it is a humble request to please pray for his health and share the campaign so that I can raise enough funds to support his treatment.

I am rejoiced to see the love and support showered on Mann.

He has undergone the Bone Marrow Transplant successfully. His mother was the donor for the same. He is presently at home under medication and will visit the hospital for checkups.

Thank you all for standing by my family during such a difficult phase.

Report fundraiser
See how thousands are crowdfunding for their causes on Milaap
Rs.725,984 raised

Donated to this campaign via Paytm? Click here if you can’t find your donation listed below.
A
Anonymous donated $51

May god bless your kid with fast recovery and good health.

Donated to this campaign via Paytm? Click here if you can’t find your donation listed below.
A
Anonymous donated $51

May god bless your kid with fast recovery and good health.

Bodybuilder Champion Struggles To Save His 4-Year-Old Son's Life