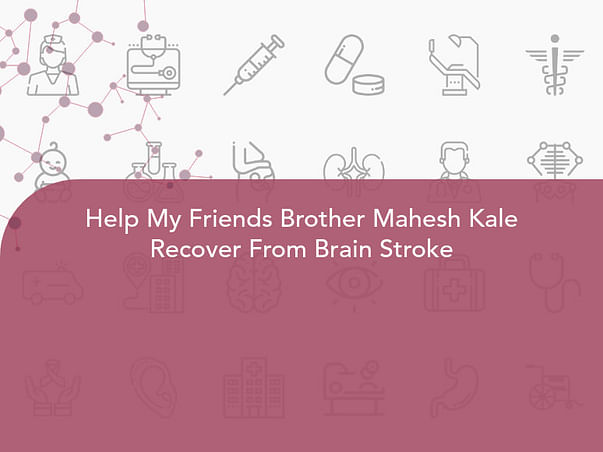 Please help Pallavi to Save her brother'sLife.

Name of the Patient: Mahesh Kale (Brother Of Pallavi kale)

Mahesh is currently admitted to ICU at Shree Hospital Kharadi Pune, suffering from Brain Stroke. He is put on a ventilator.
Post Cranioplasty he has not been able to heal naturally. His entire immune system has collapsed and only 25% of heart is functioning.
Currently, due to several infections, his health has become so weak that he is completely surviving on medicines and health is deteriorating day by day.

It has almost been a year (22nd March’19) when Mahesh was first admitted at Jalna’s Shatayu hospital. From Jalna, as he went to a coma doctor referred to Ciigma hospital of Aurangabad and was admitted for almost a month where diagnosed for Thrombolysis. He underwent CT Brain which showed left ACA and MCA infarct subfaician herniation with mass effect and midline shift. Then he was admitted in ICU initiated on edema measure, Anti Epileptic, Antibiotics along with Symptomatic treatment. He also underwent left fronto-temper-perital decompression craniotomy under GA. He also underwent Tracheotomy, weaning trial of ventilatory support was given and was maintained on T piece support. Then after discharge, he was brought to Pune as suggested to stay with family but on 2nd day itself, brain swelling started due to which he was again admitted to Shree Hospital, Pune for around 2 months. In Aurangabad itself, he was shifted to three hospitals due to unavailability of the right treatment. He underwent cranioplasty in Aurangabad and Post cranioplasty, he started getting fits (conversion, mirgi), since then up-down in health is going on and no improvement is evident.

Pallavi has already spent Rs20,00,000 till now which was arranged from savings, father’s pension, loans, arranged from friends & family. Now there are more surgeries that are going to be done which will require a hefty amount. My father is retired and she is the only earning member of the family since this illness happened. If the world comes together to donate the amount, it will act as helping hand.

Request you to donate any amount you feel like donating to save a LIFE, no amount is less, as it will eventually support her in financial crisis