Support Lekha fight/recover from Pulmonary thromboembolism, | Milaap
This campaign has stopped and can no longer accept donations. 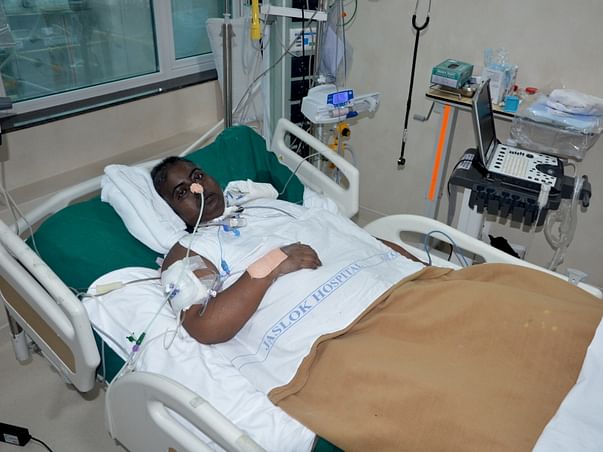 My name is Shibendra Nandi and I am on Milaap to raise funds for the prolonged treatment of my wife for life threatening complications arising out of rare blood disorder.
Life changed suddenly for me on 19th Jun 2019 when Lekha fell in the bathroom and was rushed to MGM Hospital Vashi. She was diagnosed with a clot in the brain and then began a series of surgeries and procedures. The first was neurosurgery for cranium decompression due to venous thrombosis in right brain followed by second neurosurgery of VP shunt to drain fluid from brain. Making this worse was haematic complication due to low platelet count (15 K) caused by an auto immune disorder - Immune thrombocytopenic purpura (ITP) and mastoiditis infections of the ear which are being treated parallelly. The cost of the above hospitalization (3 weeks) was about Rs 15 lacs, covered by medical insurance and employer support.
Post discharge 24x7 nursing care was provided at home, but she started complaining of breathlessness and was re-admitted to MGM Vashi due to lung complications - suspected pulmonary embolism from deep vein thrombosis and reactions from ITP medicines. First line of treatment started but her condition worsened and the doctors at MGM decided to move her to the ICU at Jaslok Hospital, Mumbai, on 20th Aug 2019.
On 21st Aug, doctors led by the leading CVT Surgeon Dr Hemant Pathare carried out a life saving Open Lung Surgery to remove clots. This was followed by two surgeries on the left leg where clots were continuing to form and another to put in a filter to prevent clots from traveling to the lungs. Further, to avoid keeping her on ventilator for prolonged periods of time, a tracheostomy was done on 7th Sep 2019. She continues to be in the ICU at Jaslok Hospital till date.
With the active intervention by doctors, aided by her will to live, age (she is not forty yet) and a very strong desire to return home to care for her son who is at a critical juncture - Class XII, she is showing very slow but positive signs of recovery.
However as a latest development post a successful discharge , Lekha was undergoing rehab @ home when in 15 days time she was  hit  with severe sepsis  through a UTI infection resulting in a pulmonary arrest  after re hospitalization at Jaslok hospital . Doctors were able to revive her and subsequently she is on ventilator and life supports . Aggressive treatment with all high grade antibiotics have resulted in steady improvement and pressure giving supports have steadily come down… WBC counts are also steadily down and this has given us renewed hope.
The earlier hospitalization cost at Jaslok alone has been Rs 55 lacs and the ongoing expenses  in the current hospitalization are about Rs 1 lac per day, excluding the cost of  any emergency surgeries. To meet these expenses, I have liquidated all my savings and jewellery, taken loans from friends and relatives (which I will have to return) and availed employer support. I have exhausted all the possible resources and avenues for arranging money for the ongoing treatment. Now I am really worried how to continue her current treatment which now requires at least a minimum of Rs 75  lacs  raised from the earlier target of 50 lacs to cover her treatment costs for approximately a month. Future expenses, include two more surgeries of the brain and ear followed by a very long rehabilitation.
This is an appeal to all of you to financially support me in my efforts to raise Rs 75  lacs for the immediate need in order to save her life. Please help in this endeavour!
Clinical summary 11 September 2019 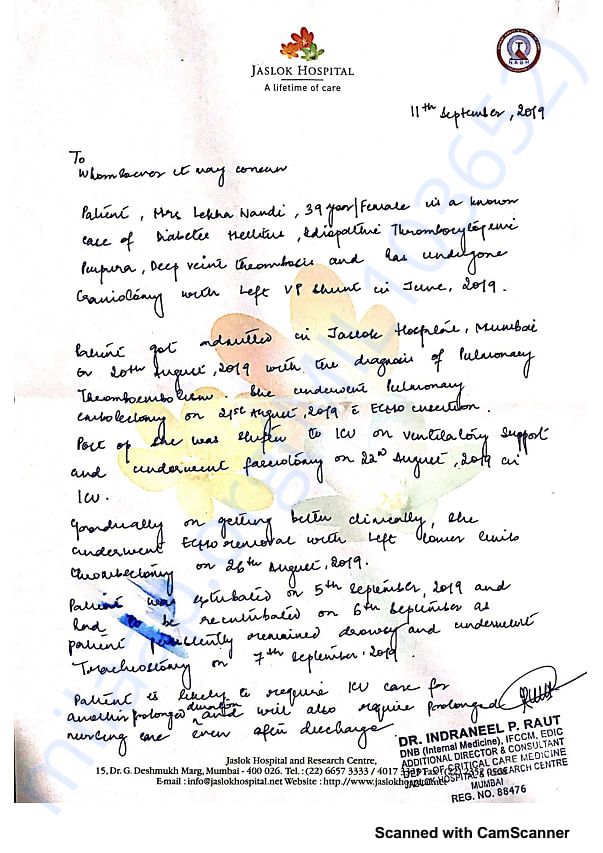 Ask for an update
Donated to this campaign via Paytm or bank transfer? Click here if you have not received an email confirmation from Milaap.
Dear contributors and well wishers ,

We are overwhelmed with the stupendous response recieved for our campaign and feel humbled by this experience .
For an update Lekha has again reached a position of great hope and other than some neurological parameters all other aspects are now fine .

We hope to shift her to a step down unit shortly from the current status of ICU..She still remains serious and will go through a very long and challenging  rehab.

With your wishes ,prayers , the Jaslok medical and nursing team acting as a medium of God  and her own superb fighting instincts we see her coming back to her husband and son and getting into a normal life .

Thanks to all and with this i close my campaign.
Best regards
Shibendra

Than you for your love. Lekha is still down with sepsis and in ICU of Jaslok , current it is a slow and painful recovery. Please continue showing your support.
Dear Valued contributors ,

Lekha was doing well and we had got a discharge also for a prolonged rehab at home ....subsequently she caught a dangerous bacterial infection resulting in sepsis and then a massive heart attack occured ..we had to re admit her in Jaslok

I am extending this campaign by 30 days more with an increased target amount of 75 lacs from the current 50 lacs.

You have supported us fantastically and i will lean on your support again and more so on your networks to help Lekha in this exigency .

I request you to ask your networks for valued contributions while quoting your existing support to our cause . I will be highly obliged for any contributions which come towards our cause.
Thanks
Shibendra Nandi
Load more
Donate

You are sending a message to
Shibendra Nandi
Go back 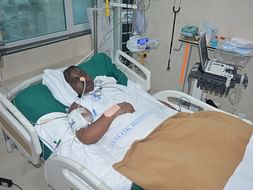