This Father Can Just See His 6-Year-Old Son Succumbing To Blood Cancer | Milaap
Milaap will not charge any fee on your donation to this campaign. 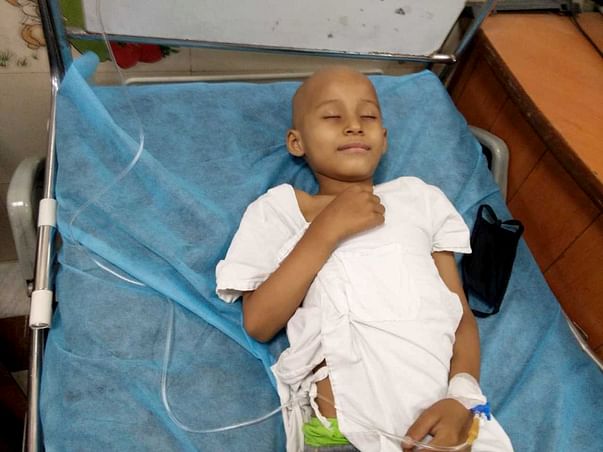 Note: 6-year-old Laxman is suffering from Blood Cancer. Despite multiple rounds of chemotherapy, his life is in danger. He needs an urgent medical treatement. His family has exhausted all his savings and needs your help for their son’s surgery.

The insides of a small, distinct house in the rural village of Almora, Uttarakhand looked bright with lots of colourful books. In one of the corners, you’d find Laxman with his eyes fixed on one of his book collections. Rufus loves to study. His father, Ishwar Singh, works as a farmer and is the sole breadwinner for the family of five. However, despite the hardships, he never denied when his son asked him to get a new book.

Ishwar Singh vividly remembers 2019’s new year night when the entire neighborhood was engrossed in celebrations. Everyone was dancing, playing games and chit-chatting. However, the night turned into horror for him when his son started wailing in pain. Rufus was suffering from fever for a few days and Ishwar Singh thought that he was crying because of that. However, when his son told that he couldn’t breathe properly, he panicked. He immediately rushed him to the hospital.

While Laxman was taken for diagnosis, Ishwar Singh spent the entire night in the hospital’s hallway, praying for his son’s well-being. He had no clue what was coming his way. As the sun rose, the doctors came in with the news. Laxman was suffering from Acute Myeloid Leukemia, a type of blood cancer. Ishwar Singh broke down as he heard this. The doctors said that Laxman needed multiple sessions of high dose chemotherapy.
Ishwar Singh dug into his savings, borrowed money from his peers to fund his son’s treatment. Finally, after months of intensive chemotherapy, Laxman came out of the holds of the deadly disease.
Their lives were slowly coming back on track as Laxman’ health began bettering. He could finally go to school and meet his friends. Ishwar Singh was happy to see his son finally laughing after suffering for so many months. However, destiny had unfortunate plans for them. A year later, Laxman’ health started worsening again. He again suffered severe fever and his nose began bleeding. Ishwar Singh’s life turned upside down. The hollows of his heart had just started to fill when life hit him again. He took his son to the hospital.

After hours of examination, Ishwar Singh was told that his son’s Acute Myeloid Leukemia had relapsed. He burst into tears and cried inconsolably. “Why is my son going through so much? What did he do to deserve this,” he screamed. He finally gathered courage after some time and asked the doctors to start the treatment. He hadn’t even paid his debt back to his peers and had drained all his savings. When he saw no option, he sold half of his land to fund his son’s chemotherapy.
Ishwar Singh’s heart broke every time he saw his son. His young one was suffering and there was nothing he could do. He’d just stand and see his baby enduring pain. With intensive chemotherapy, Rufus’ disease was in complete remission.
However, his life was still in danger. The doctors said that the only permanent cure is an urgent Hematopoietic stem cell transplant which will require 19,00,000.
Ishwar Singh froze the moment he heard this. It felt like all his senses had shut down. He came out from the doctor’s cabin and kept walking without uttering a single word, tears flowing down his eyes. He had done every possible thing to save his son’s life, but life brought him to a point where he could do nothing rather than watching his son succumbing to his sufferings. After a few tests, he was found fit to be a donor for BMT, but he had no means to go ahead with the surgery.
The word cancer scared little 6-year old Laxman. The young one, who has been suffering since months, has started losing hope now. “How can you die when your papa is alive? Nothing will happen to you. You can soon go back home to your friends,” he consoled his son while hugging him. Deep down he knew that he has no means to save his baby’s life, but he didn’t have the courage to accept that truth.
What Can You Do?
Laxman has been suffering from this deadly disease for a long time. He has been strong throughout his painful treatments. However, all his strength will go in vain if he doesn’t get a transplant on time. Ishwar Singh has no funds for his son’s surgery. Your generous contributions can help Laxman go back to his colourful world of books. 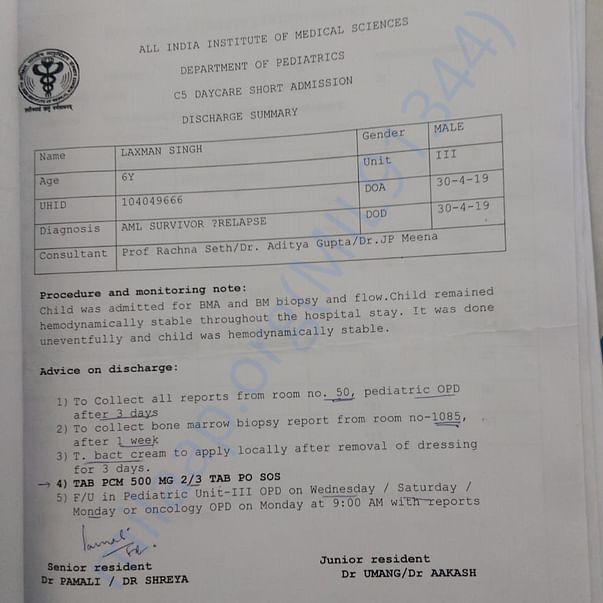 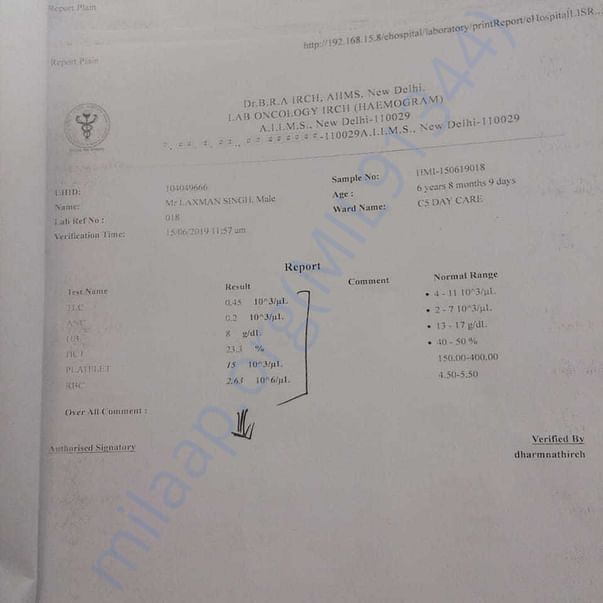 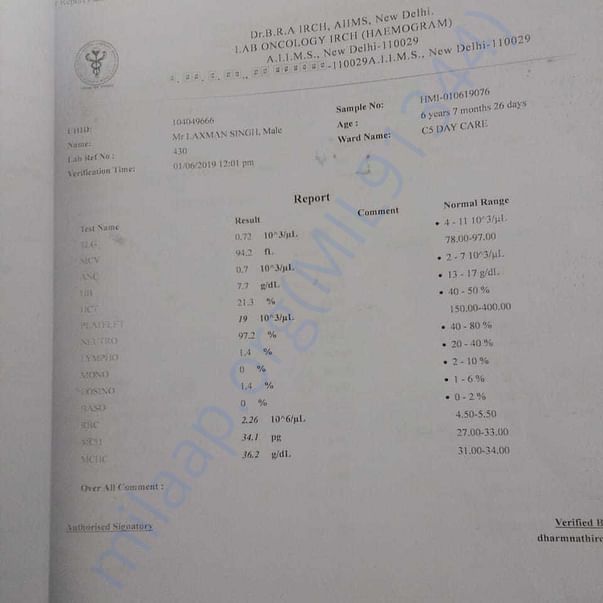 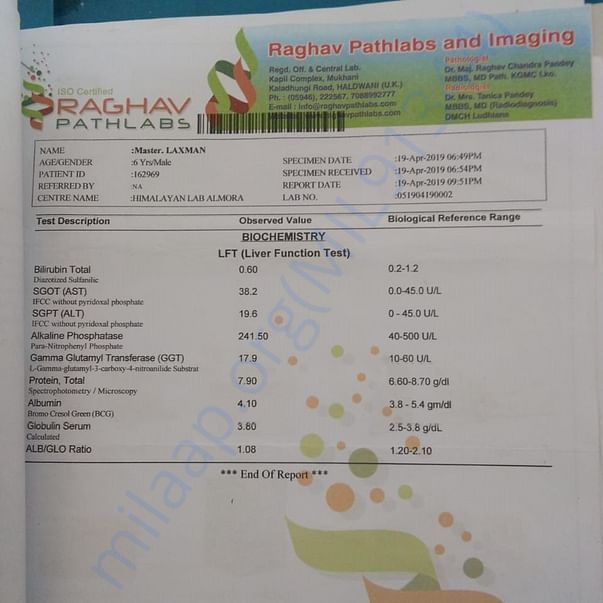 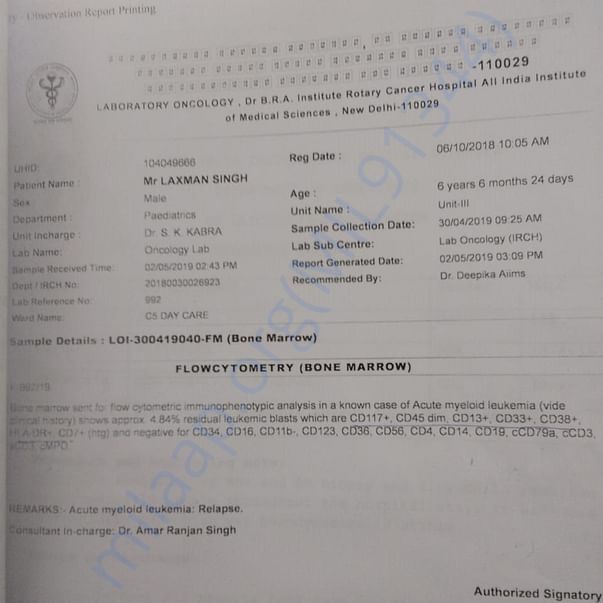 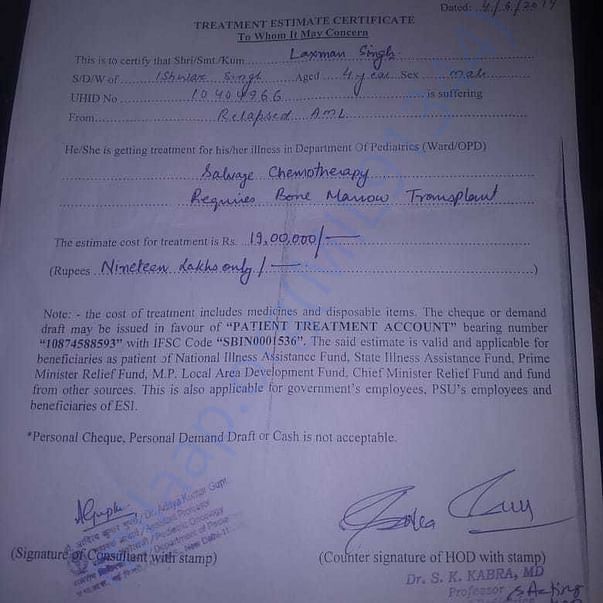 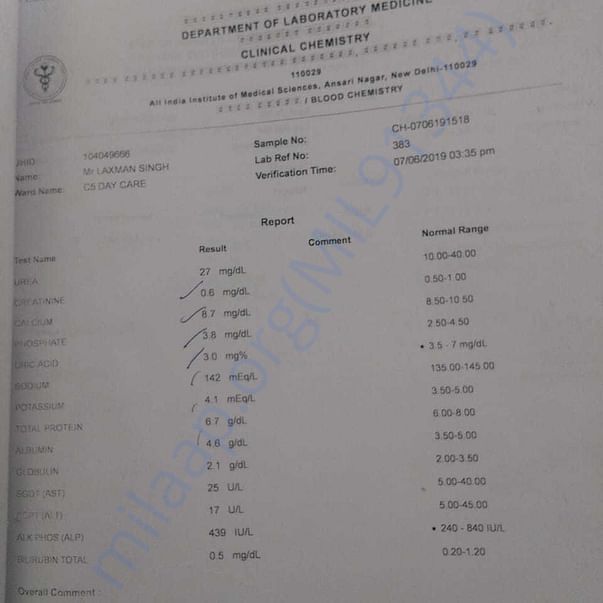 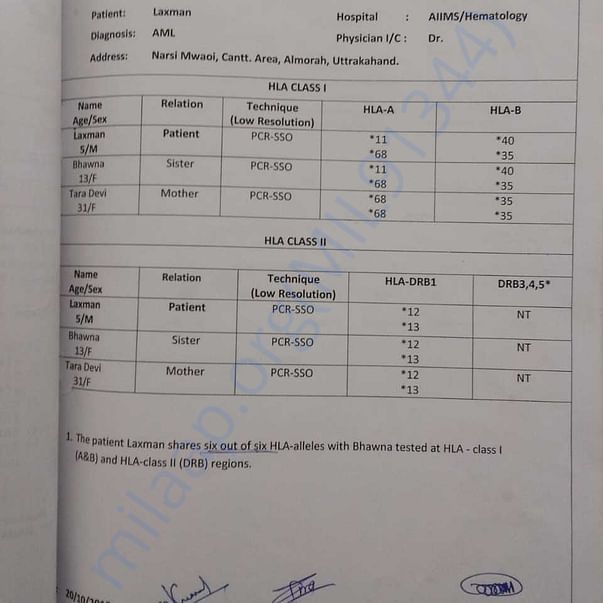 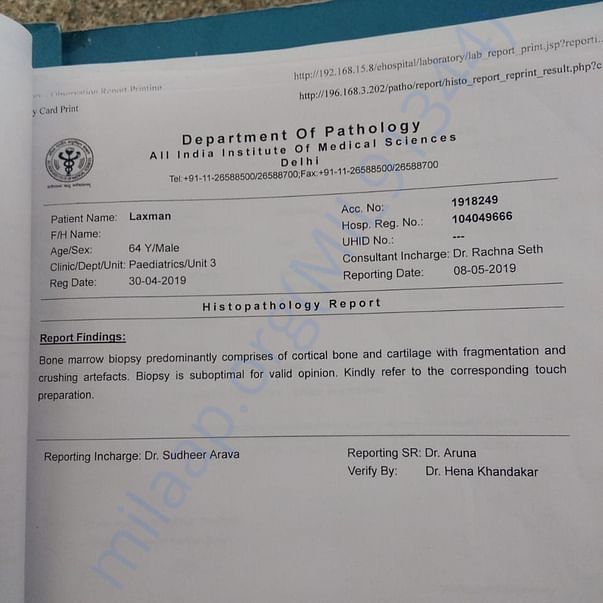 You are sending a message to
Pradeep Kumar Panda
Go back 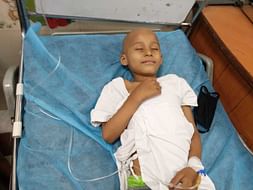