3-year-old Has Abnormal Fluid Collection In Her Stomach | Milaap

3-year-old Has Abnormal Fluid Collection In Her Stomach 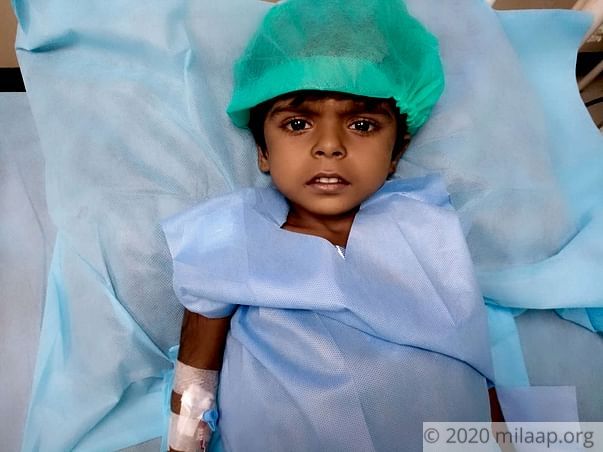 “Bloated stomach and hands thin to the nerve, that’s not how any parent wants to see their child. Lakshitha has not been able to eat any food in the past one month. When she looks at other children in the hospital, she looks at me as if to suggest she wants to have food. But when food is served, she is helpless because she can’t eat. She starts crying.”-Manigandan, Lakshitha’s father.

It all began four months ago when Lakshitha’s parents noticed bloating in the stomach. She refused food, which was completely unlike her. The girl would eat any food served, without complaints. While they were surprised, they ignored it considering that such tantrums were normal for children of her age. But, as a month passed by, things had taken a turn for the worse. The little girl had lost weight drastically. Her feet were swollen and hands so thin that nerves were all that could be seen.

Lakshitha is diagnosed with a severe liver disease

After a thorough examination of her condition for close to three weeks, Lakshitha was diagnosed with Portal hypertension with Ascites, where there is an increase in the blood pressure in the portal venous system and an abnormal buildup of fluid in the abdomen. Until the fluid is drained and removed from the system, it is impossible for the girl to think of having more than little food, which is essential for the treatment to be effective.

The girl who always smiled can hardly smile now

“She was a child of very calm-demeanour. Always smiling,but never too talkative. Lakshitha loved playing with her sister Divyashree, who is 7-years-old. Hardly comfortable talking to outsiders, she always loved being home. In the past month, there hasn’t been a single day when she hasn’t asked her mom when she can go home and play with her sister. The doctors tell us she will recover, but we can’t afford the treatment with what I could earn in the next three years,” as he reminiscences the times when his little daughter was cheerful.

This distraught father could lose his job

Maningandan works at a photo studio and earns Rs 9000/ month, only when he manages to work without absence. With hospital stay the only way for his daughter to fight the illness, he spends nights at the hospital and works during days. Ever since Lakshita was admitted to the hospital, he has been unable to report to work regularly and will earn only half of the little that he did. This has put him in jeopardy and Manigandan could lose his job at any time.

The doctors have assured the parents a significant improvement in Lakshitha’s condition, only if she stays in the hospital for the next one month. Manigandan had to borrow from friends, even after selling all the jewelry they had. He has spent close to Rs 1 Lakh so far and requires 4 lakhs for the surgical procedures, hospital stay and medicines.

UPI: rzpy.givetomlplakshith001@hdfcbank (Copy to clipboard)
Or
Click here to read the instructions before you make a bank transfer. 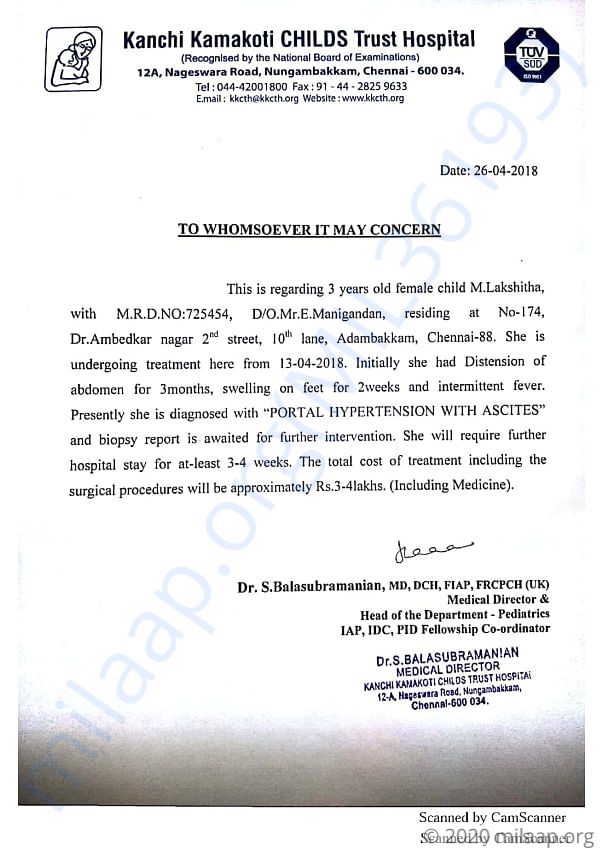 UPI: rzpy.givetomlplakshith001@hdfcbank (Copy to clipboard)
Or
Click here to read the instructions before you make a bank transfer.

Thank you for blessing your love on Lakshitha.

She is presently doing well and her health has also improved. We have been taking her for regular check ups as well. She is under regular medication.

We are very hopeful of a complete recovery soon. Will keep you posted!

Lakshitha is good now and she is on regular follow up us. It is heartening to see her recover.

Thanks for being so supportive!

Here is a quick update on Lakshitha's health.

So far Lakshitha has shown good progress and has responded well to the treatment. The family has to visit the hospital for routine check ups.

The next check up is scheduled for this week which will decide the future course of action.

Will keep you posted about the same.
Regards,
Santhosh
Donate
Report fundraiser
See how thousands are crowdfunding for their causes on Milaap
Rs.191,161 raised 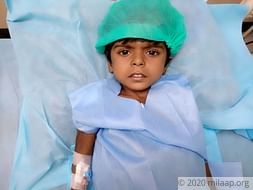 3-year-old Has Abnormal Fluid Collection In Her Stomach