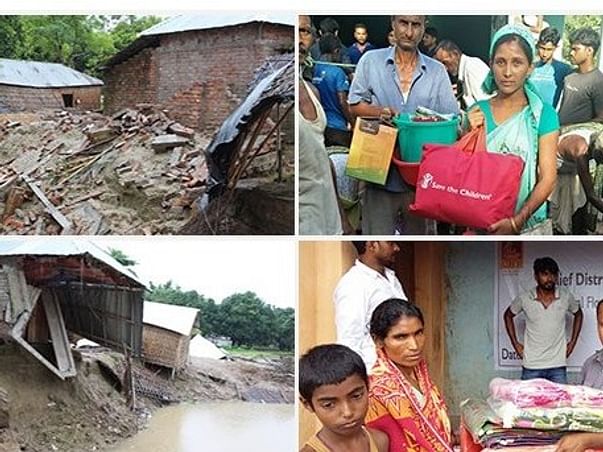 Heavy Rains lashed the state of Assam in the beginning of the month of August, and due to the incessant rainfall and the dams overflowing, excess water has been released by large reservoirs in the state, namely Subansiri Lower Dam which has resulted in swelling and overflowing of River Manas, Beki and Gaurang.  The river passes through Goalpara, Morigaon, Nagaon, Hailakandi, Baksa, Kamrup, Nalbari, Barpeta, Kokrajhar and Dhubri District, located in the Assam. The main affected regions in Goalpara, Morigaon, Nagaon, Hailakandi, Baksa, Kamrup, Nalbari, Barpeta, Kokrajhar and Dhubri district. This has severely affected the lives of people and animals in the villages along the banks of the river.
The flood level has surpassed the mighty floods of 2005, whereby villages have been evacuated and emptied for the safety of the people. These families are now relocated to various government schools, public halls and at various communal places. Apart from their house structure, they have lost all their belongings and savings. A majority of these families rely on agriculture as their primary source of income, and the floods have washed out their farms and animals, thereby affecting them for several months to come. Many villages have been completely cut off / isolated from the district and when the flood does eventually subside they will return to their dilapidated houses. The displaced animals are already suffering from shortage of cattle feed and there are more pressing times to come.

The number of people displaced in the district is approximated at around 43 Lakh people so far along with thousands of Animals.

In such desperate times, the people of Goalpara, Morigaon, Nagaon, Hailakandi, Baksa, Kamrup, Nalbari, Barpeta, Kokrajhar and Dhubri require your attention and help. The region has never experienced this severe flooding hence they were unprepared and the loss of property and farmland is unimaginable.

We know that the country and state always stands together in such severe and desperate times, and we would like you to donate for the cause of flood relief and to help these victims restore their life in whatever way we can.

Your donations would be used for the following –
We are grateful for your help!