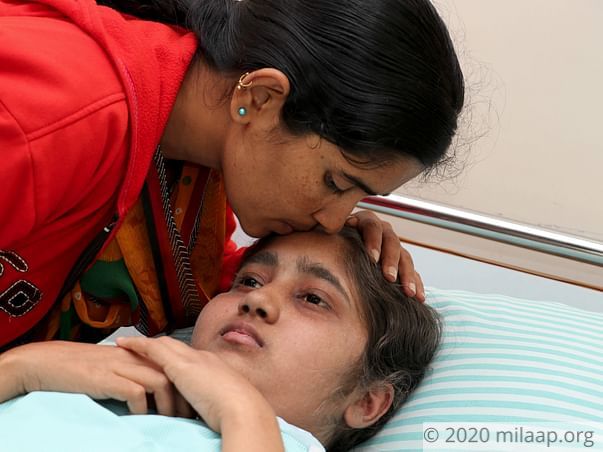 Sowmya has never looked like other girls her age. She was born with silver hair, and as a child when she would come back from school, she would ask her mother sadly why she doesn’t look like other girls or her older sister. “God has made you different, you’re special,” Manjula would tell her, oblivious that her “different” look was due to a dangerous disease that would surface years later.

“It started three years ago. Her hands and legs would shake so much, that she could barely hold a glass of water. I was told it was a problem with her nerves. But one day, she couldn’t move her entire body. I rushed her to the hospital and she was in the ICU for 20 days, unconscious. I thought I had lost her then. She slowly recovered, but her disease turned out to be a life-threatening one. I’ve protected her all her life - from other children’s taunts, her alcoholic father’s rage, but now I can’t protect her from this disease.” – Manjula, 17-year-old Sowmya’s mother.

For ten years now, Manjula has single-handedly brought up her three children. She had spent many years trying to protect herself and her children from their father, and when she realized that they couldn’t live like this forever, she decided to take care of her children by herself. She works in a garment factory and did her best for them. Even when Sowmya (17) was admitted to the ICU, she managed her hospital expenses on her own, hoping that it would be the last time her child suffered so much. Unfortunately, Sowmya was diagnosed with Griscelli’s Syndrome, a condition that causes partial albinism with immunodeficiency – causing pigmentary dilution of the skin and hair (silver hair), makes the person susceptible to even small infections, can affect the brains function and cause death if not treated in time. Now, the only curative treatment for Sowmya is a bone marrow transplant, a treatment Manjula just can’t afford.


An old pic of Sowmya

Sowmya could barely hold a pen in her hand, but she insisted on writing her exams

Sowmya is now weak and spends most of her days in bed. She can barely walk without support and needs to be taken to the hospital every week for checkups. Sowmya has braved all the hospitalization and numerous tests so far, but she can’t help but think – why me?


Sowmya's older sister accompanies her to the hospital

“Even when she was at her weakest and could barely hold a pen because of how much her hands would shake, she insisted on writing her class 10 exams. She was too weak to go to school, so she wrote it at home. But since then, she hasn’t been able to go to school. Her friends call her often and she really wants to go back. She asks me why this is happening to her, but she hasn’t given up. She’s determined to get better, and I’m determined to do everything I can to save her from this disease.”

Manjula is the sole breadwinner of the family and after years of medical expenses, she can’t afford the bone marrow transplant

Manjula works in a garment factory and earns around Rs. 9,000 per month. She has borrowed money and used her own savings to afford Sowmya’s medication and hospitalization all these years, but a bone marrow transplant costing more than 30 lakhs is above and beyond her means. However, it’s the only thing that can save Sowmya from this disease that will slowly begin to affect her brain functions and vital organs. Manjula can’t save her daughter without your help.

At home, when Sowmya is not lying down, she’s praying – for her mother to not have to struggle so much for her and her recovery. However, Sowmya’s disease is making her weaker and she needs a bone marrow transplant at the earliest to recover. Manjula, a single mother, is determined to save her but she’s falling severely short. You can help Sowmya survive this disease and go back to the life she once knew.

UPI: rzpy.givetomlpkumariso001@hdfcbank (Copy to clipboard)
Or
Click here to read the instructions before you make a bank transfer. 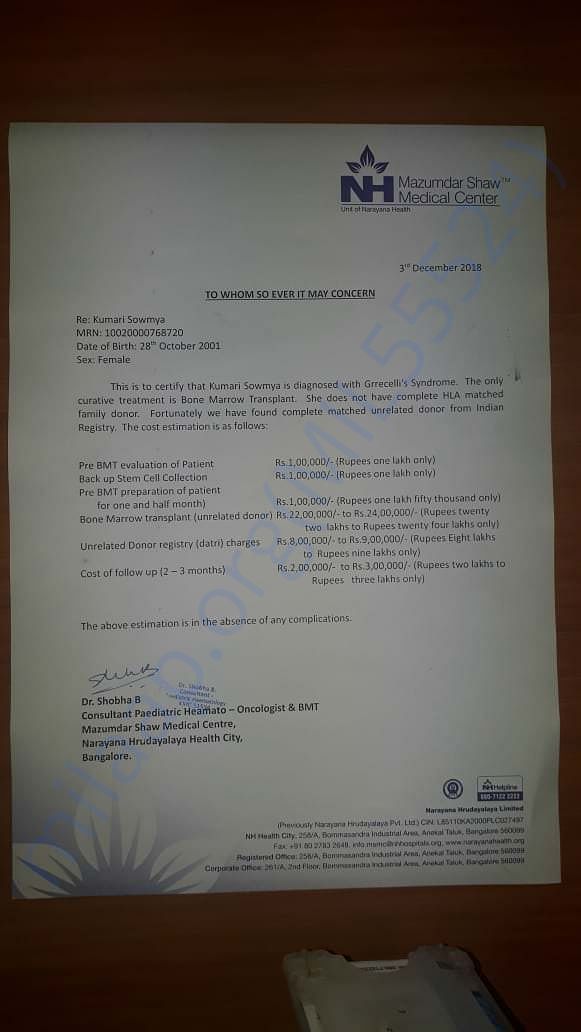 UPI: rzpy.givetomlpkumariso001@hdfcbank (Copy to clipboard)
Or
Click here to read the instructions before you make a bank transfer.

Report fundraiser
See how thousands are crowdfunding for their causes on Milaap
Rs.1,254,923 raised 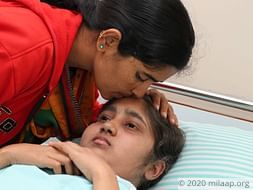