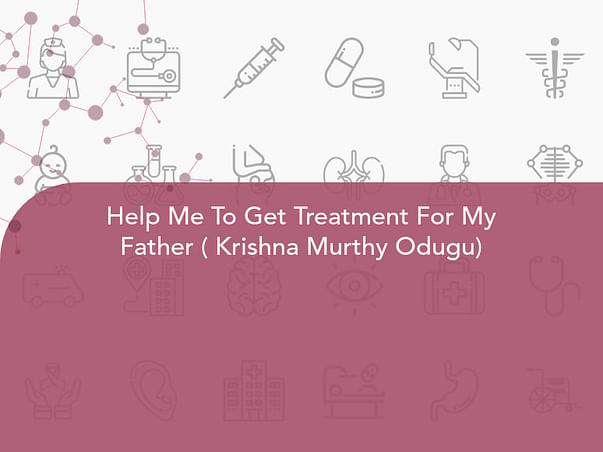 I am Kishore Odugu, my father Krishna Murthy is suffering from COVID 19 Severe diseases. Most of the parts of the lungs effect. Surviving on oxygen. He needs proper treatment to clear the infection. Currently, we are at sree Prathimma Super Speciality Hospital, Guntur, Andhra Pradesh, India.
On May 15th My mother was hit by covid and recovered at home. on May 24, My father was hit by COVID19 and his lungs impacted severely and admitted, after 15days rigours treatment. My father was discharged. I spent 4.7 Lakhs, in which I raised 1.2lakh Through friends like you, after 15days, my father was discharged.

On 19the June, onwards my father's left fingers were in a lot of pain. So, We went for a scan as per the doctor's advice, there is a blood clot in two veins of the left hand, fingers not getting blood supply, tests were conducted.

On June 23, I admitted my father to Kiran vascular surgeon, Vijayawada, an Estimated cost to remove the blood clot, they took him to the operation theatre but due to lack of oxygen level, they brought him back and discharged him. The doctor advised me to bring him back after 10days. Again on 3rd July, I took my father to check up, and again, He said my father's oxygen level is not supportive of the operation. He gave me 15 days of medicine. I am very nervous about the treatment. I am lack money, need your kind support.