Support Stray Dogs Get Treated | Milaap
Milaap will not charge any fee on your donation to this campaign. 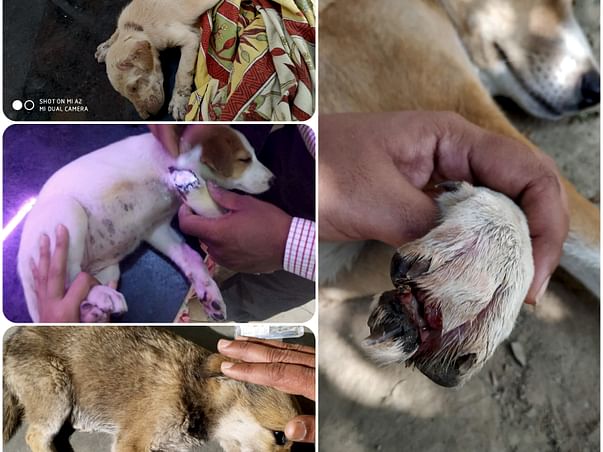 Move over the 'Mother of Dragons', here's a real life 'Mother of Stray Dogs'
and she needs yourhelpIn an era when there is a fad of owning foreign breed dogs among the "Dog-lovers", our local dogs arebeing neglected and left alone by themselves on the harsh conditions of city roads.Most of them are weak, ill and struggling to survive with very few people caring about them.One such millennial from New Delhi, Komal is single-handedly taking care of more than 25 such
stray dogs all at her own expenses. Inspite of being a working women and living alone in New delhi, she
daily takes out 2 hours of her time to care for the stray dogs living near her office building and house.
She has named each one of them and treats them as their kids, feeds them, take the sick and injured
ones to hospital, provides for their vaccination and sterilization operations, all on her own expenses.
However, she wants to do more for them and for as much dogs as she can, but she has monetary
limitations. She is already spending 7-8k from her salary towards this cause which is not enough.
The major expenses for her are:
Transportation - As her office is outskirts of the main city, there are Vet hospitals or NGOs
available nearby. Tis hazari hospital is near but it only provides OPD and dogs are not admitted
there. So, she has to provide private ambulance/cab for taking her sick or injured 'kids'to Snajay
Gandhi hospital which is at a distance of 2hours. This cost becomes much higher during
emergencies at night.
Food - As her office is away from from residence area, the dogs have no source of food. Most of
them live inside the campus and have never been out. She provides nutritious food to them
including paneer and chicken to all her kids.
Vaccination/Medicine/Operations - She has to provide for vaccination of pups which is very
important but is very costly. 13 of her pups have died due to lack of vaccination due to various
diseases like distemper, PARVO even after admitting them to hospitals. She also pays for a Vet
to visit the pups when they have wounds which cause maggots.

Reflective collar- Recently, She bought reflective collar-belts for her kids to help them avoid
accidents at night.
Shelter - if enough money is available, she is considering building a small shelter home for them
and other injured stray dogs.
Adoption - She also encourages people to adopt stray pups to provide them a family. Already 3 of
her puppies have been adopted due to her efforts.

She also has pet stray dogs at her home town Panipat, Haryana who are taken care of by her mother.
Her mother is an inspiration for her work and inspite of being middle-class, she has always taken care of
dogs in her locality as her own kids. One of them got injured during pregnancy and requires operation
quickly but there are no vet hospitals in Haryana.
So, if you are a real dog lover, help her in taking care of them by supporting her financially or by adopting.

Every donor will get a personalized video from a dog they helped and are also welcomed to
visit and see them in person so you can see how much she loves her kids.
Reflective collars

Every donor will get a personalized video from a dog they helped and are also welcomed to
visit and see them in person so you can see how much she loves her kids.
Follow instagram Page for daily updates and Videos.
Instagram link :
https://www.instagram.com/my_world_of_dogs_/?utm_source=ig_profile_share&igshid=1j2umi6pelvj4

Scan & donate with any app
check_circle_outline Download payment receipt
Report fundraiser
See how thousands are crowdfunding for their causes on Milaap
Rs.251 raised

Donated to this campaign via Bank transfer/QR Code? Click here if you can’t find your donation listed below.
am
ankit donated Rs.151
AR
Anurag donated Rs.100

Since I don't earn hence unable to contribute a decent sum but Heartily appreciate such a lovely and unselfish gesture through a little amount! Keep serving. With love

Donated to this campaign via Bank transfer/QR Code? Click here if you can’t find your donation listed below.
am
ankit donated Rs.151
AR
Anurag donated Rs.100

Since I don't earn hence unable to contribute a decent sum but Heartily appreciate such a lovely and unselfish gesture through a little amount! Keep serving. With love

You are sending a message to
kk 0717
Go back 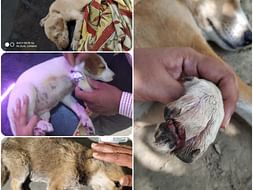