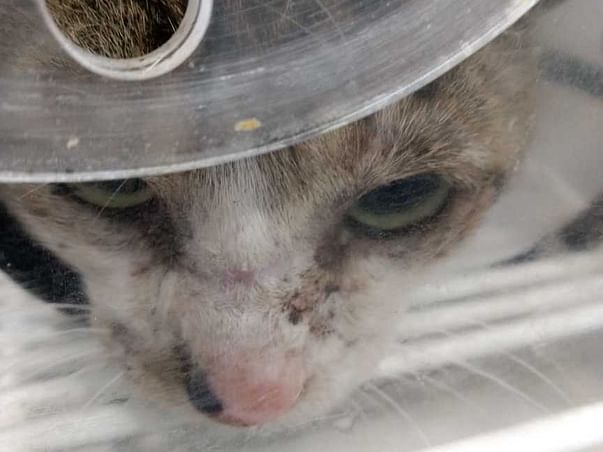 Dear all
I have never ever appealed for funds at any forum.because I usually managed on my own but this time, i am.stretched with multiple rescues.
Urgently required  help with funds for Whisper a cat who was brutally attacked with a broken glass  bottle. It  was pierced, rather slashed  through his testicles and penis (they were hanging loose). Slashed his leg and cheek. Shards were removed from his face, legs and his testicles and penis were removed surgically. He needed two procedures as on the first day his body temp was low and his vitals were dipping.  Fortunately his urethra was not damaged badly and with a little reconstruction he is able to pee on his own.  We found him in a pool of blood, the road had blood. Sad part he was in this state for long and no one helped till we saw him. He was rushed to surgery and due to dehydration and low blood count we couldnt even get a blood sample to check his vitals. He needed a blood transfusion (my brave boy Ronin and my girl kitty are the proud donors)  Though it's almost over a week since he is admitted, I didnt put a fund appeal as WHISPER was in an out of the incubator. It was touch and go. His TLC was 65,000, 50,000 and so.on, never below 40,000. Today its 32.000.  But the last 36 hours have been good,  he has stabilised and didnt need the incubator.
Not long ago Whisper was an indoor pet but his family who.stayed in our lane, moved to Singapore and left him behind. I did try to get him.adopted but to no avail. The last nine months of street life has been tough on him - attacked by cats, cahsed by dogs and hit by man. We fed him one meal.  He was a  largely silent cat and we named him Whisper. He was neutered two.weeks and used to avoid conflic.
But he was a silly  cat who rested under trees,on the footpath, next to the dhobi etc, walked in.the middle.of the road and was never scared of humans. I guess now he will be scared of them as he has started hissing at maxvet handlers.
After he is fully stable and recovered quite a but, we will shift him to a medical.baording as maxvet would be expensive  Also he wouldn't get the catebhe required The bill.for ICU, incubator  and minor sutures. Diagnostics. Nursing charges etc  are already above Rs 242175 .  I have already paid the surgery costs of over 22750 plus
I.need to raise the ICU  and baording and diagnostic costs
Bills attached
Please do open your hearts and help Whisper.