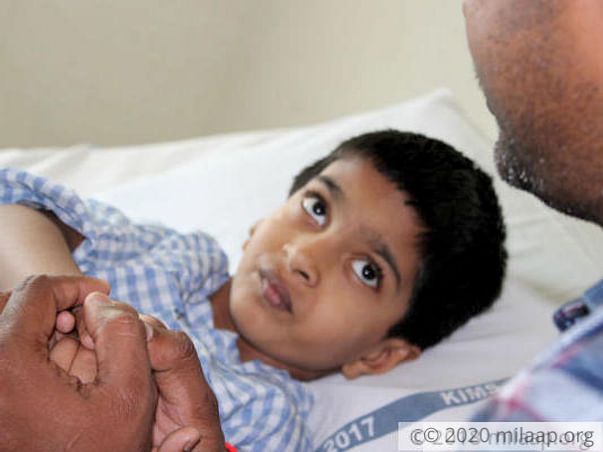 “Our son has been in and out of the hospital ever since he was born. We thought the worst was behind us, but we were wrong. A few days ago, we found out that there’s extremely high pressure on the right of his heart and he needs a surgery within 10 days. But after spending on his treatment for years, I don’t have much to go on with. Now, if he doesn’t get the surgery in time, the damage will be irreversible.” – V. Chowdary, Dhanush’s father

Dhanush (6) like other children his age, is an inquisitive, bright young boy. He enjoys playing with his puzzles and loves going to school. Unfortunately, Dhanush’s heart isn’t like others'. He was born with a rare condition - a combination of four heart defects.  Without a surgery in ten days, Chowdary fears losing his son forever.

Dhanush was born with a rare, severe heart disease and has spent the last 6 years in and out of hospital

Born underweight, Dhanush was immediately taken to the NICU and placed on ventilator support. He was soon diagnosed with Tetralogy of Fallot, a combination of four heart defects that caused oxygen-poor blood to flow out of the heart and to the rest of the body. He can’t play or run as much as other children and often asks his father, ‘Appa, when can I play football with my friends?’ V Chowdary tells him that he needs to eat more and get stronger first, but behind his calm, warm smile is a terrified father.


“His condition was critical at birth, but we had to wait for 3 months for him to get stronger to get the surgery. We were shocked and scared, but all we wanted was for our Dhanush to make it out of the NICU, healthy. He was born in so much pain, and we wanted to do everything we could to take that away. He was also born with a folded, swollen ear. He experiences severe shortness of breath, and we have to take him to the doctor every three months because of his cold. We tried to give him a childhood like any other, but there are days when even Dhanush knows he’s different."

Dhanush’s first surgery was to correct the hole in his heart and to insert an artificial valve. However, severe obstruction in the valve has now caused the pressure on his heart to drastically increase. Dhanush needs an urgent heart surgery to remove the old valve and replace it with a new one so that his heart can function normally.

Each day that Dhanush goes without surgery, the pressure on his heart is only increasing. Every time Chowdary takes him for a test, he’s scared. Chowdary and his wife have spent the last 6 years constantly on the edge worried for their son’s health, but even then, they never imagine that his condition would deteriorate so suddenly and rapidly. Chowdary now finds himself helpless.


“I’m still paying off the loans I had taken a few years ago to get him treated. I quit my job at a small company two years ago to take care of him. He needs constant care and attention. Now, I’m a small-time farmer and earn just enough to afford his medications. A surgery is more than I can afford. I’ve used all my savings and borrowed from many people so far, but it’s not enough. He needs the surgery in 10 days and I can’t afford the 5 lakhs needed in such a short time.”

Little Dhanush has been through a world of pain. He can rarely be carefree like other children and often spends his days playing indoors. Your support can give Dhanush the life-saving surgery he needs, and a childhood that he can fondly remember. Dhanush’s parents are desperate to save him but they can’t do it on their own. They need your help to give their son a healthy heart and life. 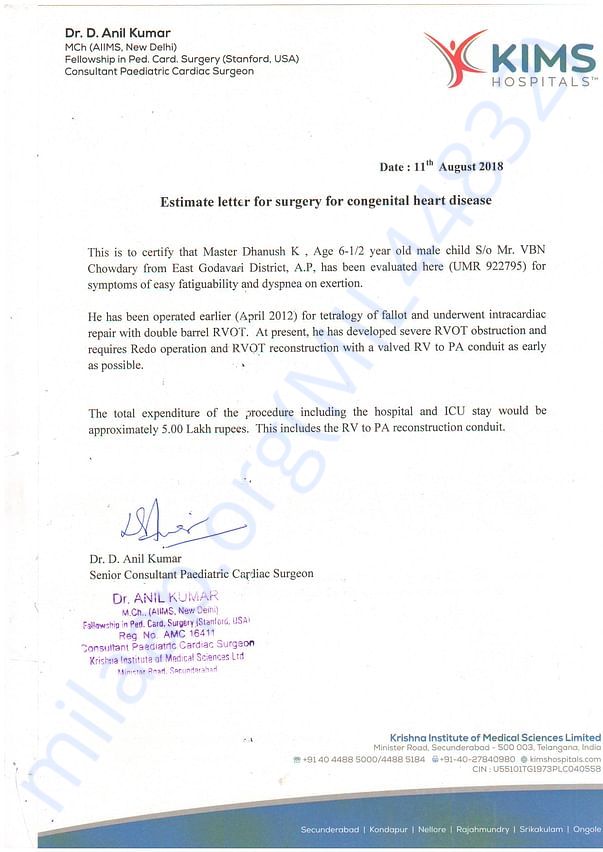 Thank you for the love and support you have shown towards Dhanush.

Currently, he is at his home and doing a lot better. He has to visit the hospital for another week for fresh dressings and for the removal of stitches.

He has shown good signs of improvement. Please pray for his speedy recovery.

Dhanush has been shifted to the ward from the ICU oost surgery and is in a stable condition. Doctors are monitoring him round the clock. We will keep you posted.

Thank you for the support you have shown.

We would like to inform you that Dhanush has undergone the surgery on and is now in the hospital under the observation of doctors. We will keep you posted on his progress.

Scan & donate with any app
check_circle_outline Download payment receipt
Report fundraiser
Know someone in need of funds for a medical emergency? Refer to us
Rs.167,550 raised 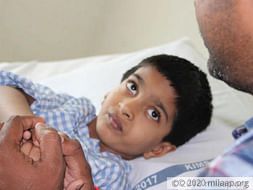