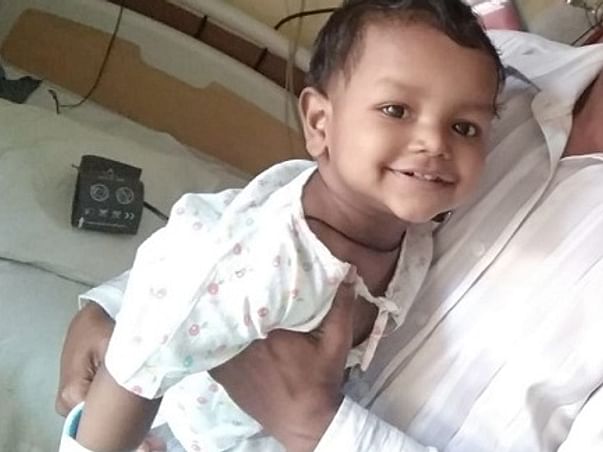 Share
John Peter and Vanitha were very happy to see Joel in good health until he was 1.5 years old. Vanitha was pleased to hear Joel call her “Amma” and to believe that all the trauma she had experienced till now will not come back. However, very soon she and her family were devastated when they saw swellings all over Joel's body.
Trauma endured by John and Vanitha in the past: Joaquim, the elder son of John and Vanitha, was born after a year of their marriage. When Joaquim was 1.5 years of age, he started falling ill frequently. He was admitted to the hospital where he stayed for several months. His RBC and WBC reduced drastically and there was swelling in his kidneys and all over the body. Little Joaquim put up a brave front but died when he was 3 years old because of Hemolytic-Uremic Syndrome (HUS). Two years after Joaquim’s death, Joel was born.
When Joel was 1.5 years old, Vanitha noticed swellings all over his body. Joel’s parents took him to the hospital, and it was perceived that he was showing all the symptoms which led to his elder brother’s death.
Due to lack of finance, John (Joel’s father) sought treatment in a government hospital for him. He had to change to another government hospital since the reason behind fall in RBC and WBC count could not be detected. Eventually, John took Joel to Dr. Balabhai Nanavati Hospital for treatment.
John says, “I still have to pay a bill of Rs. 1.5 lakh to the hospital. It has been over 15 days in the hospital, and our daily medical expenses run up to Rs. 10 – 13 thousand. People we know have been helping us but the treatment is going to cost us more than 3 lakh per month. I cannot afford it. All I can do is approach charitable trusts for aid and only pray for help to come...”
Joel’s present condition: Joel was diagnosed with aHUS, a typical hemolytic-uremic syndrome. It is an extremely rare disease which is genetic in origin. Joaquim, the elder brother of Joel, previously died of this disease. Joel is hemodynamically stable, has facial puffiness, low hemoglobin, and low platelet count. WBC and Protein get flushed out of his body constantly when he urinates.   Joel is also having high Blood Pressure (>99th Centile). He has to take more than three anti-hypertensives to maintain his Blood Pressure.
Under treatment: Joel is being transfused FFP (Plasma) daily and requires a frequent blood transfusion for hemolysis.
Joel’s family belongs to the lower socioeconomic class. John had already spent around 8 lakhs to treat his elder son and lost him. Finance is the main hurdle for Joel’s further treatment now.
John says, “We can’t see Joel undergoing the same pain that his elder brother has gone through. We don’t want to lose him. Moreover, Vanitha is now pregnant and carrying a five- month baby. We are extremely worried about that baby also now.”

You are requested to kindly extend a helping hand to Joel and his family. Your kindness can give Joel life and the gift of happiness and smiles to him and his family.