Help Shantanu And Lakshmi | Milaap
Milaap will not charge any fee on your donation to this campaign. 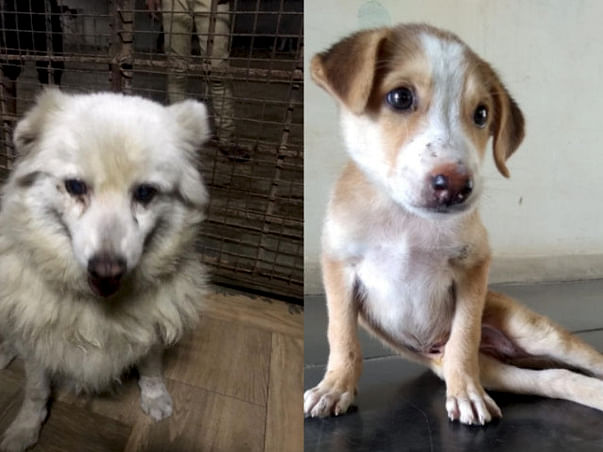 This is the story of two beautiful souls that found themselves helpless, and on the road. One was screaming in pain, hoping someone would help. And the other was running and walking in whichever direction she thought she would find the people she once called family.

Unlike the others who struggle to live, and eventually die, on the streets, these two were lucky enough to have found someone who stopped to look at them and do something about their condition. This appeal is to help us help the two helpless doggies - Shantanu and Princess Lakshmi.

Shantanu is a 4-month-old pup who was rescued from the streets in July. He was just days old when he was attacked by other dogs and sustained injuries to his spine, that paralyzed part of his back and the hind legs. Since he was too young for surgery, he was put on medication for neurodevelopment for two months.

He also underwent laser therapy (10 sessions of six minutes each) more than a month ago, but there hasn’t been much progress.  While he moves his tail and his hind legs when held, he cannot yet stand on all fours. He uses the fore legs to drag himself and move around, and is able to sit on his own, with his weight on the hind legs.

He is currently on homeo medication that has been helping treat his condition, albeit slowly. Doctors believe there is some chance of him walking, and if not, he should be able to use a wheel cart and move around. We also got him a drag bag that he wears when moving around, to prevent sores.


Unlike other pups of his age, Shantanu cannot help himself to move to urinate or defecate, and hence requires full time special care. He is put up at a commercial foster facility as he needs one on one care and administration of medication. He is usually on diapers to prevent soiling and infections to the skin. The total cost of boarding, vet visits, medications, diapers, and transport to and from the vet comes to around 20000 every month, which the rescuer has been trying to fund from her own pockets.

But Shantanu requires long-term treatment and may need a few more months before he can be ready to use his wheel cart and find a forever home. He will be in foster care for another four to six months while we continue his treatment and track his progress.

But continuing this without funds can be difficult. And we do not want to give up on Shantanu, who is full of life. He deserves a fighting chance. And for that, we need your help to keep his treatment going.

This is an appeal to help Shantanu by contributing funds for his treatment. Details of the cost and the bills are mentioned below.
Expenditure:
Boarding costs: Rs. 12,000 pm; Rs. 60000 for five more months
Vet visits (Once every two weeks): Rs. 400 (Per Homeopath visit, which is once every two weeks)+ Rs. 2500 on average for medications, diapers and vet charges, once every month; Rs. 14,500 for five months

Total fund required for Shantanu’s care for the next five months: Rs. 75,000/-

She turned old, had difficulties walking and developed other health issues. So her owners chose the easy way out and abandoned her.


I found her walking in the middle of a busy road, trying to understand how to not come under some speeding vehicle and die a miserable death.

Rescued her, got her first-aid and boarded her at a commercial kennel. I took her to the vet again for basic vaccinations and blood tests. The reports came and we discovered she is nearly 10 years in age and has kidney and liver issues. She was also neglected and abused by her previous owners.

Without any delays, I started her treatment even when my pockets were empty. Every vet visit of her costs nearly Rs. 3,000. We are hoping she will recover in a couple of months and as the vet suggested Princess Lakshmi will have a good quality of life after recovery.

I appeal to you for helping Princess Lakshmi with her treatment and turn her into a happy baby once again. Afterall, old-age is gold-age. Send in funds and prayers too. She needs them both.

Expenditure:
Vet visits: Every week the charges come up to Rs. 3,500 which includes medication, saline, injections and transport. Her renal food can by Vetlife Farmina costs Rs. 340 per day.

Total fund required for Princess Lakshmi’s care until she recovers fully and gets adopted: Rs. 85,000/-


Note: Bills attached for your reference.

Ask for an update
Donated to this campaign via Paytm or bank transfer? Click here if you have not received an email confirmation from Milaap.
Recent update on Shantanu: Doctor rules out surgery, as the spine damage is irreversible. The last resort is to buy him a wheel cart that allows mobility - we will be getting it soon, before March. Most of the fund is for his boarding and care at a private foster who charges 12000 a month. Please continue to support us
Dear Supporters,

Creatnin levels of Lakshmi are coming down and we need more support financially. As she requires saline and injections everyday, Every 4th day a review blood test is done. Please do help us.

Milaap is offering a 15% matching on all the funds until the funds last to help raise funds faster towards our cause. Every payment that happens 15% will be added on that payment. For example, every Rs. 1,000 will receive a Rs. 150 matching contribution on the campaign.

Shantanu continues to get one-one care at the foster’s home and has become quite active. We plan to try a few physio exercises at home, and will also be consulting an orthopedic veterinarian who will see if the spine can be repaired by surgery, since he’s a little grown now.

Princess Lakshmi's blood report are showing signs of recovery. We need your support for Shantanu and Lakshmi to heal completely.

As we have not been able to reach the expected funds yet, we want to extend the dates to be able to help Lakshmi and Shantanu.

Scan & donate with any app
check_circle_outline Download payment receipt
Report fundraiser
See how thousands are crowdfunding for their causes on Milaap
Rs.55,189 raised

Please keep updating on shantanu and Lakshmi. I shall prayer for their well being. Regards dimple

Please keep updating on shantanu and Lakshmi. I shall prayer for their well being. Regards dimple

H
You are sending a message to
Harshita
Go back 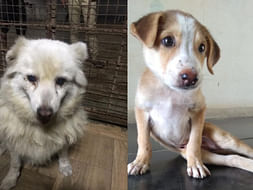