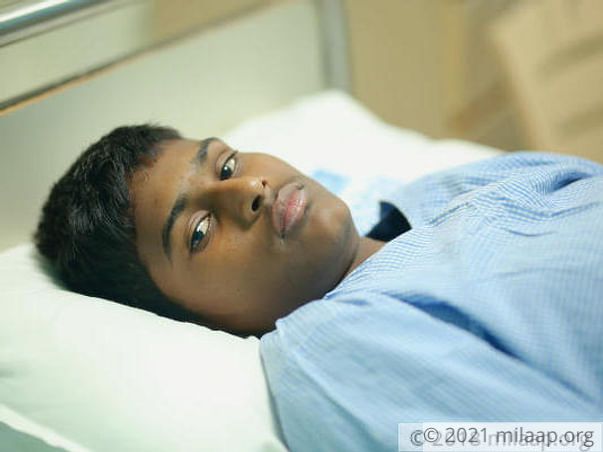 “My husband left us when Hemanth was only a 3-year-old . He hasn't contacted us for years, not even after hearing that his son has cancer. I had left no stone unturned to get my son the treatment he needs. Just when we thought that he was getting better, his cancer has become deadlier than ever. I can't even find a way to save my son,  ” – Shyamala, Gunji Hemanth’s mother

Hemanth (16) always found joy in the little things. He loved going to school and playing with his younger sister. However, there’s nothing that makes Hemanth happy any more. The smile that once brightened up Shyamala’s day has now disappeared. Blood cancer has made Hemanth extremely weak. Despite the pain and sorrow, there’s only one thing he begs for – to go to school. But Shyamala knows that even a small infection or fever, can make him critically ill. Hemanth needs chemotherapy to beat cancer, but Shyamala is helpless.

Hemanth was first diagnosed with cancer in 2013. Shyamala recalls how he was burning with a fever a few days before they got the dreadful news of his cancer. He immediately started chemotherapy, after which, for 3 years, Hemanth was cancer-free. He was slowly recovering and soon Shyamala could see traces of the old Hemanth that used to be jovial and carefree. Unfortunately, their happiness was shortlived. 3 months ago, Hemanth’s cancer relapsed.


“Just after I met with an accident, we found out that his cancer had relapsed. I was completely bedridden and I couldn’t be with him during the tests. I was hit by a bike when I was walking back home and injured both my legs. I remember Hemanth was there with me throughout the tests and procedures. He held my hand and said ‘Amma, don’t worry. I’ll take care of you’ It breaks my heart to think that he has to go through all the pain again. His life was back to normal, we thought the pain of cancer was behind him."

“When someone asks him where his father is, Hemanth tells them that he’s dead. He doesn't even ask about him. Since my husband left us, I’ve been everything to my children. With help from my father, I have tried to give them a good life. We never had much, but we found little things to keep us happy. I never imagined that my son would one day fight a disease as deadly as cancer. I think he knows he has cancer, but we never talk about it. I think both of us want to stay strong for each other, but I can see the fear in his eyes every time we get tests done. He knows cancer can kill him without urgent treatment, but he hides his fear from me.”

Shyamala’s father, an auto driver, has been supporting her and the children for years now. With his meagre income and by borrowing from relatives, they somehow managed to get him treated the first time. But now, they’re struggling. Shyamala has no income and her ailing father has used all his savings so far. Shyamala, a single mother, has brought up Hemanth amidst many difficulties and hurdles, but she can’t save him from cancer without your help.

Hemanth needs to start chemotherapy immediately to finally beat cancer. He bravely fought cancer once and can do it again for good with your help. His mother doesn’t have the means to afford 15 lakhs for his treatment and has struggled to bring up her two children after her husband's abandonment. With chemotherapy, Hemanth can finally have a chance of a bright, pain-free future.