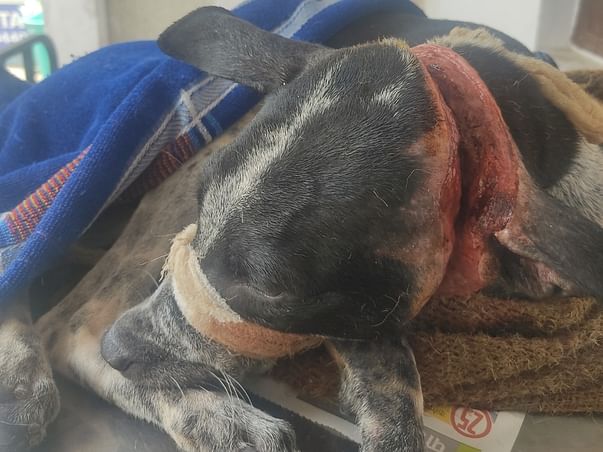 Share
We named him Thor as he is a fighter
Someone have tied a nilon string to a little stray dog and that string had cut his neck and he was suffering from 10 days, I received a call on my personal blog friends of the animals and next morning I went to help the dog with the help of locals and nagar nigam team, we caught the dog and had cut the nilon string but his wound is so deep that he needed proper medication and good care so I shifted dog to city pet hospital, kota
Thor had gone from major surgery and it took around 3 hours to get the surgery done..
He is been admitted to hospital later on, as per vet the little dog will take time to heal. For next 10 days we Thor will be having two times dressing over his wound. Later we will realise him on his original location, Friends of the animals is a personal blog not run by a group of people. It's part of my hobbies, I'm helping distressed animals from last 7 year's and I'm working for welfare of animals but sometimes for such major cases I need support as there are so many injured strays in kota city because of lack of health care facility.
I have added hospital bill and hostel charges that's 700 INR × 10 days
That's 7000 INR
2500 (Surgery charge)
500 (extra)
Do support Thor to get a new life.
All the bills will be shared here as well & as well on my IG account  : IG details : Friend of the animal's
Thank you 🙏