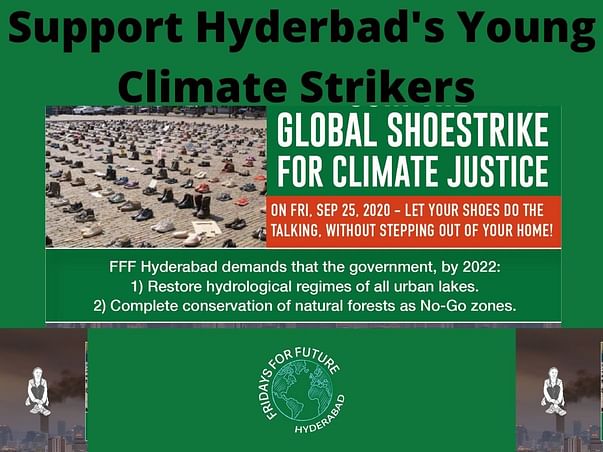 Share
"I want my Hyderabad lakes to be blue without any pollution, when I will grow up" - A 5th Grader from Khushbow Vidyaniketan School, Hyderabad

What is a Shoe Strike for Climate Justice?

Since past one year, children and youth across the world are doing Global Climate Strike to demand decisive actions  on Climate Crisis from the governments and leaders . It all started with a 17 year old climate activist, Greta Thunberg who skipped her school every Friday and demanded Swedish government to act on Climate Change by sitting in front of Swedish Parliament with placard. Slowly, she motivated crores of children, parents, and  youth across the world. Now millions of people are demanding climate action from their respective governments. Global Climate Action is happening again on 25th September, 2020 but due to Covid-19, it has taken a twist. Instead of People, their Shoes will demand Climate Action. Wondering how? It’s simple. Citizens will  put their shoes  together at a place with their personal message as shown in the picture below – 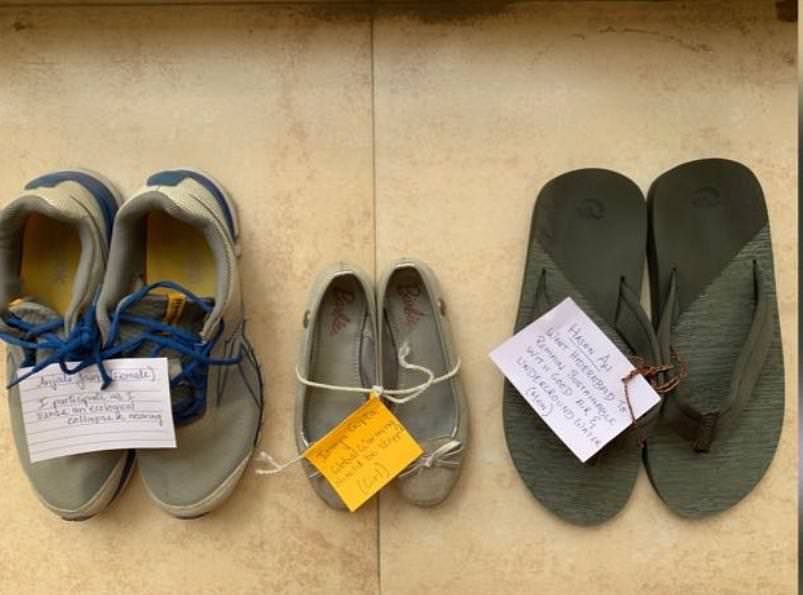 How can you support us ?

Fridays for Future Hyderabad is a collective climate action  by children and youth of Hyderabad without any leader. Everyone's participation  in the movement is on voluntary basis.
In the upcoming Global Shoe Strike for Climate Justice  on 25th September, there will be no gathering of people due to Covid-19. But thousands of people are sending their old shoes with their messages to the government. After the strike, these shoes will be donated to under-served people through an NGO Goonj.
Therefore, it is crucial that in absence of the strikers, their messages should be effectively disseminated to the government and media through  videography and photography. On the other hand, we need to also spend on  transportation for bringing shoes to the strike location from different shoe collection centers in Hyderabad and then send them to the NGO.
Here is a summary of the expenses which will be incurred during the climate strike -

Why are the youth and children of Hyderabad participating in Global Shoe strike for Climate Justice?

Climate Change is a global crisis which is caused by local factors. In Hyderabad too, lakes and forests, which once used to make the city a green livable place are witnessing a rapid death due to unsustainable development and encroachments by both land sharks and government agencies.To avert this crisis for their safe future, children and youths of Hyderabad had come up with following demands from the Telangana Government -

Hyderabad was once used to be called the "City of Lakes" with over 3000 lakes in 70’s, but today most of its water bodies have either dried up or encroached to such an extent that it's heightening an acute water crisis in the city and is effecting the overall environment. 50% of the water bodies which are remaining, have either disappeared or are shrinking.
With the lakes destroyed, the city is forced to draw water from Krishna and Godavari which are over 250 kilometers away. It’s not just that private companies are encroaching our lakebeds, even civic authorities are also encroaching  by laying roads through the lakes in the guise of building walking tracks and beautifying them as was the case with Malkam Cheruvu, Kapra lake and Ibrahim Cheruvu.
Nizam-era Osman Sagar and Himayat Sagar, Hyderabad’s largest lakes were built in 1912 over two decades. It used to supply about 10 per cent of Hyderabad’s total daily water supply of 345 million gallons per day (MGD). Cut to 2020 and these lakes are literally nowhere close to their optimum levels, with Osman Sagar being literally barren today, despite continuous rains during this monsoon season. One major tourism spot of Hydearbad, Hussainsagar lake was so pristine and clear that British officer, city historian and author Phillips Meadows Taylor had compared the waters of Hussainsagar with shining pearls and diamonds while ‘Nightingale of India’ - Sarojini Naidu had visualized  the waters of Hussainsagar in a poem as the image of her soul.
"O, lake, O living image of my soul”.
But sadly, the stream is now a municipal gutter - Ashoknagar Nala - and the heavy pollutants in the water body have robbed from the sight of Hyderabadis, the legendary 'chadar' or water curtain.
It is feared that these lakes will join the league of heritage lakes which have totally disappeared now, such as  Tigal Kunta, Somajiguda Tank, Mir Jumla tank, Pahar Tigal Kunta, Kunta Bhawani Das, Nawab Saheb Kunta, Afzalsagar, Nallakunta, Masab Tank etc.
The Covid-19 lockdown had been even worse for the city’s lakes. It has emboldened land sharks to encroach lakes in the city. Without any one to object, roads are being laid on water bodies, debris dumped for occupation and boundaries had been altered to reduce the full tank level (FTL) and buffer zones of the  lakes like Malkam Cheruvu near Raidurgam, Amber Cheruvu, in Kukatpally, Palle Cheruvu in Bandlaguda, and Nallagandla Lake. A prominent lake in the city, Khajaguda Lake is encroached upon by the state authorities themselves and the lake is being filled to lay roads in the name of beautification. In order to stop these activities, the activists had time and again asked the government to put FTL (Full Tank Level) and Cadastral maps of city’s lakes on public domain but nothing has happened so far. Hence activities like plotting, road construction and closing of channels are going on at rapid pace in the city.
While delivering the judgement on encroachments in  full tank level (FTL) or buffer zones of three lakes — Vanamcheruvu, Medlacheruvu and Chelikunta, even Telangana High Court had told the state government not to allow Telangana to become a desert state like Rajasthan. As per an assessment in 2016, 23 out of 25 prominent water bodies of Hyderabad had failed to meet the water quality standards set by the Central Pollution Control Board (CPCB), which means their water is not even fit for irrigation and industrial cooling, let alone for drinking and domestic use.
In 2017, scientists found a strain of bacteria in the Isnapur lake that are resistant to certain antibiotics. The lake is surrounded by 400 factories and industrial units comprising the Pashamylaram industrial area and mainly three main pharmaceutical clusters of the city. Same is the story for Kazipally lake, situated near the Kazipally industrial area of Hyderabad. Situation of residents living near these lakes is such precarious that children were being prescribed antibiotics of very high dose (usually meant for adults), as they were not recovering with the usual treatment.

In 2020, Hyderabad was named the World’s Most Dynamic City by JLL City Momentum Index 2020 and number one among the ‘34 Best cities to live and work in India’ as part of a survey by destination discovery website, Holidify.com. Despite being the most dynamic city, it has the least open green space in the country. There is just 0.4% (2.81 sq. kms) parks and open spaces for a city which has population of 68.1 lakh and spans over 650 square kilometers. As it turns out, the urban and regional development plans formulation and implementation (URDPFI) guidelines say that it is optimal to have at least 10-12 square meters per person but on an average there is only 2.7 square meters of open space per person in the city.

Even though Telangana Government has repeatedly stressed on the need to increase the green cover in Hyderabad and started a large-scale tree-planting program called Haritha Haram in 2015, the results are not much visible. As per a recent RTI, 9.7 crore saplings have been planted by the civic authorities, GHMC and HMDA over the last five years as part of Haritha Haram, but there is no statistics available about the number of plants that have survived.
Recently, Green India Challenge (GIC) initiative was rolled out to increase green cover in the country. As a part of this challenge, a prominent actor in the Telugu Film Industry had donated Rs 2 crore to convert over 1,600-acre of Khazipally reserve forest, which is located 20km away from Hyderabad, into an urban forest park. The government is now inviting other industrialists, celebrities to adopt other reserve forests around the city. Now the question arises is -
“Why dense forests are being exploited in the name of development and beautification?”

“Why this Green Challenge is not used by the government to revive a barren land or an already exploited green cover, instead of compromising a well-functioning lung space of the city?”

The city has a Tree Protection Committee which signs off which trees are to be cut and is responsible for ensuring that for each tree chopped, five saplings are planted. But when the saplings are planted, people take a picture along with it and leave the scene. There is nobody to see if they grow or not. On the other hand, unsustainable concretization of the city has given rise to 'urban heat islands', a phenomenon that is worrying climate change experts.  If these urban heat islands will keep on increasing in Hyderabad, the average city temperatures will increase by 3-5°C as per WHO, thus leading to more heat strokes and other chronic diseases among the citizens.

I understood all this, but how is this strike going to bring any impact?  Is  there any impact due to past ‘Global Children & Youth Climate Strikes’ in Hyderabad?

One thing which our past climate strikes have taught us children and youth is that small collective actions do bring a big change. Here are some pictures of our past strikes - 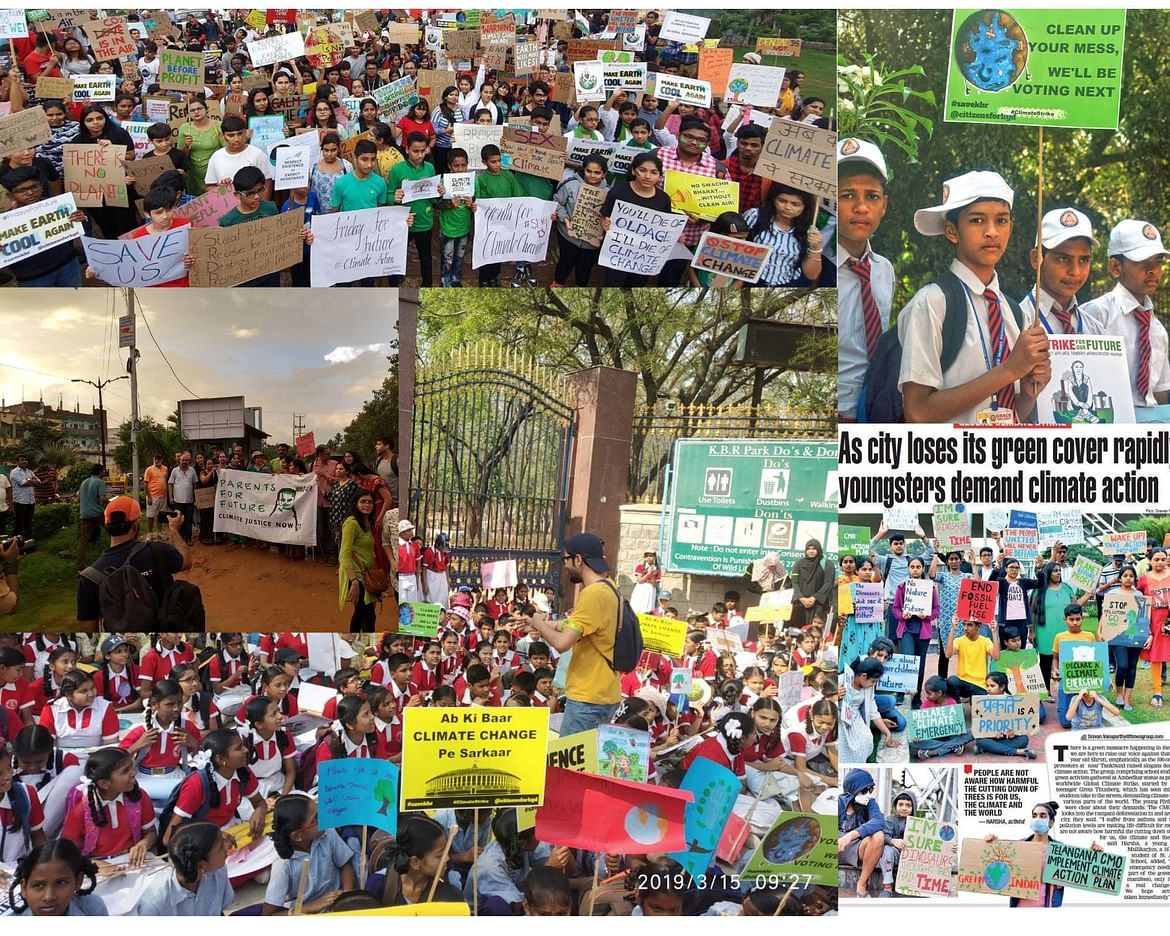 Do check this video of previous climate  strike.


Since end of 2019, thousands of children and youth of Hyderabad have organized three major climate strikes in the city. In these strikes, some of the major demands were -

1.  No flyovers on the Ecosensitive Zone of KBR Park, which is the main lung space of Hyderabad.
2. Preserve Bison polo grounds and Save greenery; Drop the plan to construct new Secretariat.

Both these demands had been met in the  last one year  as an impact of these non-partisan, non-violent, leaderless climate  strikes, along with  the efforts of  other citizen groups like Citizen for Hyderabad, Save Bison Polo group, and inputs given by climate scientists.

Do check out the links here for further details -We are sure that with continuous efforts, we  can bring back the Green Glory of Hyderabad.