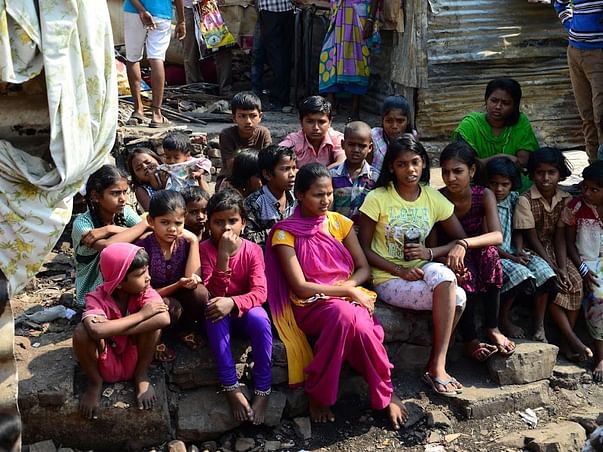 Share
Barefoot, small kids run around the narrow lanes of Damu Nagar slum in Kandivali. After a massive fire broke out on December 7, in Kandivali’s Damu Nagar area, a slum of over 2000 homes were destroyed. That unfortunate day, not only wrecked homes of the poor people but also took away from the children their books, bags, uniforms, footwear and a lot of their innocence.
Several NGOs chipped in to cater to the basics – food, clothes, first aid. However, the other necessities were overlooked. "I'm used to it now. The rocks don't hurt anymore," said 8-year-old Poonam Gaikwad. "I want one and one for my younger sister Raashi. She is five and goes out of the house often,” said Durga Salvi, a 10-year-old.
When Iamin correspondent enquired, concerned parents told that they need at least a pair for the youngest kid in the house. On asking why the family hadn't provided the kids with flip-flops, Jaya Sangde, mother of 3 kids, said, "What should we buy first - food grains or slippers? Our priority is to keep our kids alive.”
The children don’t have uniforms, a lot of them don’t have bags, most don’t have footwear, a few don’t even have text books but their families continue to send them to school, a 15 to 20 minute walk away from the community. All in the hope of a better future.
A lot of the kids have managed to get themselves footwear, a few have managed to get bags, there are many more who haven’t yet been catered to. They still carry books in polythene bags and walk bare feet.
Bridge, a Mumbai-based not-for-profit organization and the on-ground partners for a sustainable, long-term rehabilitation of the Kandivali Fire survivors, will utilize the funds raised on Milaap to provide children with the basics necessities to continue with their education and subsequently also provide quality, supplementary education to bring the children of the community at par with other kids.