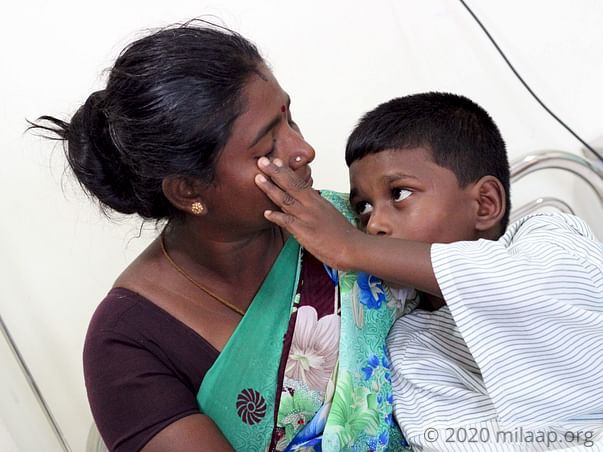 Eswaran's parents don't know how to explain his heart disease to him. He once overheard them talking about it, and from then on, fear has engulfed him. He cries, terrified that it can cause him pain and he keeps asking his parents "What will happen if my heart stops beating?" "what will happen if it beats too fast?" His parents struggle to fight back their tears and convince him that he will be fine soon. But Eshwaran needs surgery, and all he worries about is whether he will even make it till then.

A sickly child at birth, Eswaran soon got healthier

Within a few minutes of his birth, Eswaran's body turned blue. For months, he would turn blue whenever he cried, but soon enough, his parents got their first sign of hope when Eswaran's bluish tinge turned to a pink, healthy color. He soon progressed from a sickly newborn to a healthy toddler, Eswaran was growing well.

The symptoms of his heart disease resurfaced years later

Eswaran is a happy 8-year-old who loves chasing after his younger brother Dhevaesh (5). He is able to do everything that any child his age can do, like play sports, dance and run. He has even won 1st prize in a running competition at his school's annual sports day. Except for slight breathlessness, Eswaran was seemingly healthy. However, a month back, it came as a shock to his parents when he was diagnosed with heart disease during the health camp at his school. He has Atrial septal defect (ASDs) which is usually not diagnosed until adulthood can damage the heart and lungs, shortening life. It is a defect in the septum between the heart's two upper chambers.


An old pic of Eswaran

"At first we did not believe it,  we took him to different hospital in the town and they confirmed it. They warned us that we need to watch him closely because any kind of virus or cold could end up in his chest and cause more problems to his heart. We are scared that anything can happen to him. When I think that he has been living with this disease for years, I tremble." - Arumugam, Father.

Eswaran's father is a cook in a small hotel in Sivaganga district. He earns around Rs 400 per day with which he manages to feed his family of four. His income is just enough for 3 square meals and he does not have any savings. He needs Rs 2 lakh for Eswaran's heart surgery which is beyond his means. His friends and family are also poor and all they can give him is only a few hundreds. His parents are worried that they might not be able to afford the surgery in time. They are desperately waiting for your help.

UPI: rzpy.givetomlpeaswaran001@hdfcbank (Copy to clipboard)
Or
Click here to read the instructions before you make a bank transfer. 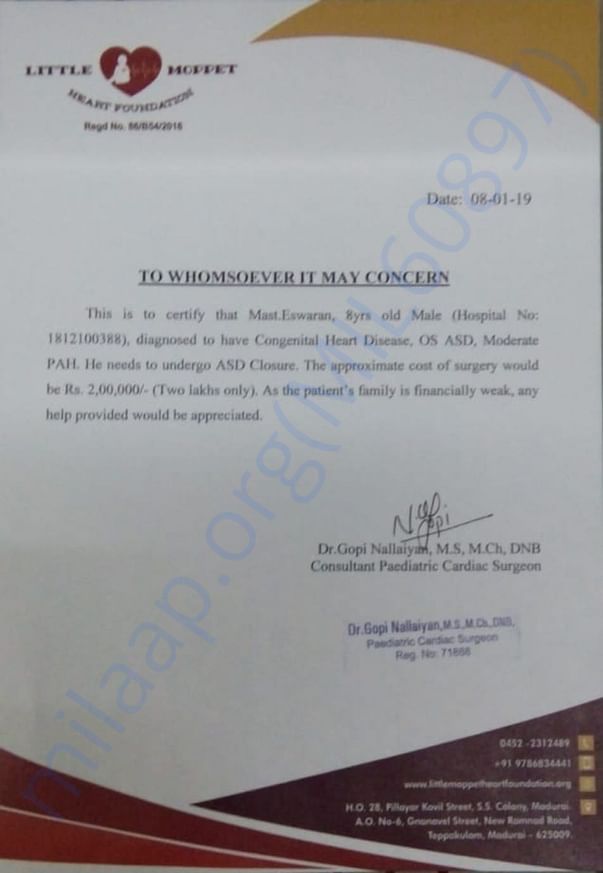 UPI: rzpy.givetomlpeaswaran001@hdfcbank (Copy to clipboard)
Or
Click here to read the instructions before you make a bank transfer.

Eswaran's surgery was successful and he is fine now. Thank you!

Report fundraiser
See how thousands are crowdfunding for their causes on Milaap
Rs.7,000 raised

Our Prayers are there for a successful surgery.

Our Prayers are there for a successful surgery. 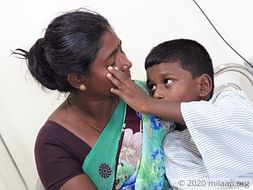