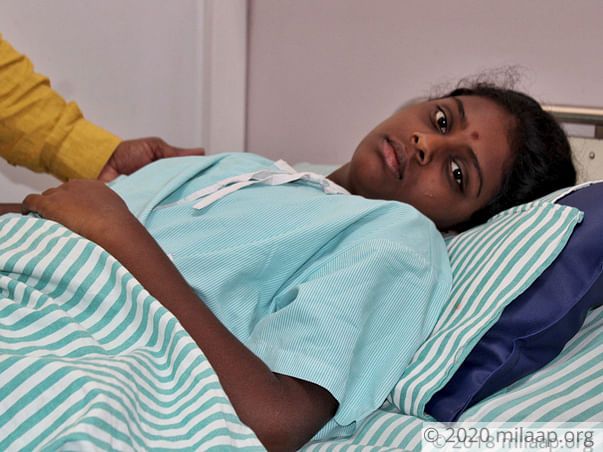 Every time the doctors make their daily rounds, Charushree has a number of questions for them. Extremely inquisitive, the 12-year-old makes sure to ask them what medicines they’re giving her and how it will help her get better. She tells her mother “I need to know the treatment, how will I become a doctor otherwise, Amma?” Ever since she was diagnosed with blood cancer two weeks ago, Charushree has decided that the only thing she wants to be is a doctor when she grows up. Even as she lies on the hospital bed getting chemotherapy, she reads her science textbooks. Cancer has made her weak, but it hasn’t broken her spirit. Charushree is more determined than ever, oblivious to the implications of cancer or that without treatment, she won’t make it.

“Our daughter is an all-rounder at school. She always topped in exams, has won many prizes for art, including a State award for craft, and is even in the sixth level of abacus. She excelled at everything she did because she never gave up, and now she’s determined to beat what she thinks is a ‘blood infection’. But I can’t tell her that she has cancer, and I can’t tell her that we don’t have the means to save her.” – Ashwini, mother

When Charushree returned home from school with a cough, Ashwini and Lakshman were not worried. They took her to a local doctor who prescribed medicines. However, even after a week, Charushree’s cough persisted. On October 2nd, Charushree’s cough was so bad that her parents rushed her to the emergency room at a nearby hospital at midnight. A few tests and 24 hours later, they were told that their daughter has blood cancer.


“She was so cheerful all the time, and every day had new things to tell us about school. Her younger sister and she would spend hours playing together. But her life has changed overnight now. We were not prepared for this, I don’t think any parent can be. We never thought that a mere cough would turn out to be something as dangerous as cancer."

Ashwini and Lakshman saw all their hopes and dreams crumble before their eyes. As they contemplated what they would tell Charushree about her diagnosis, they also worried about how they’re going to start her treatment.

They’ve spent all their savings to start her treatment, now the helpless parents have nothing left for the life-saving transplant

Ashwini and Lakshman managed to start Charushree’s treatment with the savings they had, but they knew it wasn’t enough to continue her treatment further. Charushree needs chemotherapy followed by a bone marrow transplant at the earliest. However, after spending nearly 3 lakhs on her treatment already, the devastated parents have nothing left. Ashwini, a professor of information science in a college in Bangalore, hasn’t been able to go for work ever since the diagnosis.


"We had to get her admitted immediately, and I had to be with her. My husband works for a private company and now his salary alone isn’t enough to afford the treatment. All we had hoped for is a happy and healthy future for her, we were so happy watching her grow into someone that's so kind and responsible. Now cancer threatens to take away everything from us."

Ashwini and Lakshman need 35 lakhs to save their daughter from cancer, an amount that’s above and beyond what they can afford. Charushree, a bright and talented young girl has a whole life ahead of her and is determined to fight the dreadful disease. However, her parents are falling short. Charushree has less an one month to get a bone marrow transplant within and beat cancer.

UPI: givetolakshman@yesbankltd (Copy to clipboard)
Or
Click here to read the instructions before you make a bank transfer. 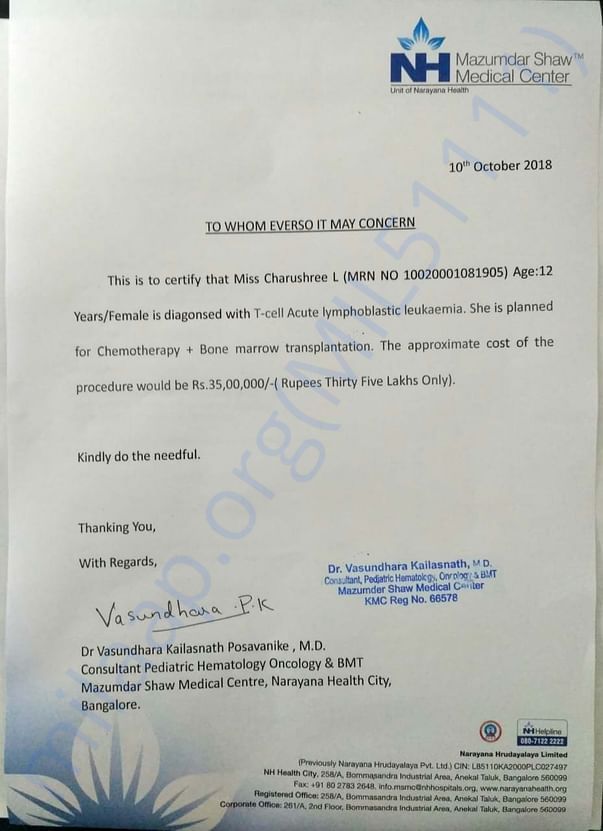 UPI: givetolakshman@yesbankltd (Copy to clipboard)
Or
Click here to read the instructions before you make a bank transfer.

Thank you all for supporting Charushree!

Charushree is doing well. She came to the hospital for blood investigation.

Charushree underwent the transplant and is coming to the hospital for consultations, as advised by the doctor.

Charushree had to undergo Bone Marrow Transplant immediately and as I type this she is in the operation theater to undergo the transplant. I humbly request all of you to support me at this moment. I am in urgent need of funds and I have very less time to raise the funds. Please support me and also share the campaign with all your friends and family.

Please keep her recovery in your prayers.

Report fundraiser
See how thousands are crowdfunding for their causes on Milaap
Rs.1,527,223 raised

Donated to this campaign via Paytm? Click here if you can’t find your donation listed below.
AS
Arpitha donated $150

May god be with you and take care of your daughter

Donated to this campaign via Paytm? Click here if you can’t find your donation listed below.
AS
Arpitha donated $150

May god be with you and take care of your daughter

ZR
You are sending a message to
Zainaba Rameeza
Go back 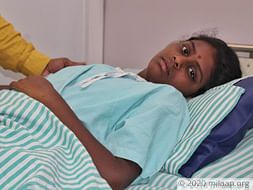