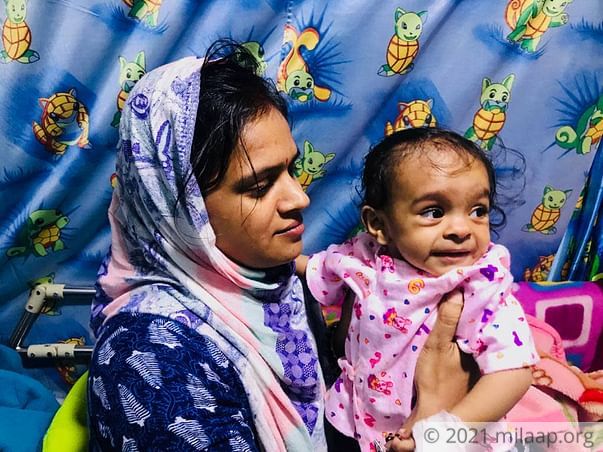 Share
Rinku stood in front of the posters inside the hospital that explained what an open heart surgery was - he wanted to understand what was wrong with his baby, Chahat, that she had to undergo something like this. But nothing made sense to him as his mind was completely foggy. Time and again he was reminded of his daughter lying down in the hospital bed, crying out in pain. Chahat has a large hole in her heart and has severe difficulty in breathing. Her only hope is an open heart surgery at the earliest but her poor father is not in a condition to afford it.

Chahat was never blessed with a healthy life since she was born. She was always suffering from a cough and cold and even running a temperature. The local doctors had told Rinku that it was pneumonia.

“But in the last 20 days, her condition became worse. My little baby could hardly breathe on her own. We took her to a hospital in Patna and she was admitted there for 10 days. But then the doctors told us, it was not pneumonia that she was suffering from - she has a hole in her heart which needs surgery. We immediately brought her to Delhi in the hope of better treatment,” - Rinku, father.

Rinku used to work in a private company on contractual basis. He toiled hard day and night to make two ends meet. But since Chahat got really sick, he has been running from pillar to post to get his baby girl treated. Amidst all of this, poor Rinku lost his job.

“I have already spent about Rs 70,000 after borrowing from my relatives. But now I need another Rs 3.5 lakhs for the surgery. Without help, I would never be able to bring my baby home.

8-month-old baby Chahat needs open heart surgery but her poor and unemployed father is afraid that without help, he can never arrange for the money. You can extend a helping hand to Rinku and help bring his little daughter back home safe.