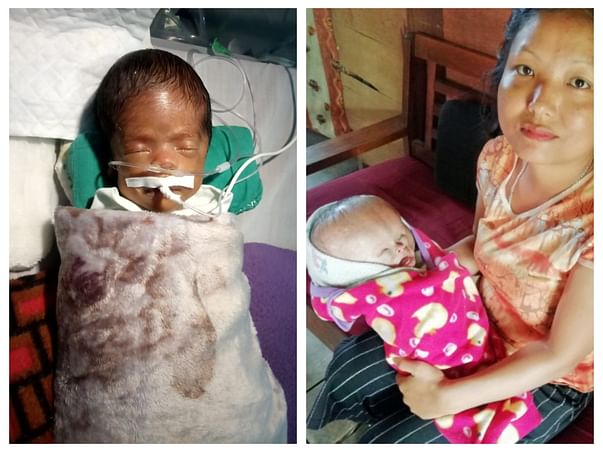 Share
Baby Chinghoihcy is a 6 months old child. She stays with her parents and grandparents at Mata Village, Churachandpur, Manipur. The child had a pre-matured birth on the 25th Feb. 2020 (born two months earlier before the due date) at District Hospital, Churachandpur. One month after the child was born, the parents observed the swelling of the head (medically reported to be neural tube defect). The parents approached the District Hospital, Churachandpur, then she was immediately referred to RIMS Hospital in Imphal. The child was admitted to RIMS hospital and received medical treatment for about one and half months with the help of the relatives. As the lockdown started in March, everyone's living condition was disrupted so was the parents' and the relatives'. For the father being a daily wage labourer, there was no source of income generation. He remained helpless in providing the medical needs of the child.

"It has been almost everynight that we have to stay awake with the thought that we could survive through the dawn."

It was during their stay at the hospital that the lockdown had started and there has been a lot of issues in respect to income generation. There was a question of how they will continue availing the medical treatment. They were left with hopelessness and as their borrowing amount has increased day by day. Since the hospital expenses were high for them and they could no longer provide for the bills, they requested the doctors to discharge them inspite of the baby’s health condition

The child was discharged from the hospital as the parents could no longer afford the expenses, by keeping the fate of the child in God's hand. Its been four months that the child has been at home with no other health issue. Inspite the neural tube defect, the child still fights for her life. She could survived without oxygen cylinder when she was brought back home. Observing the fighting nature of the child, the mother could not resist but ask for help in the community.

The mother says, “I really believe that the baby is fighting for her life and that she wants to survive. Hence, I could not lay back but urge people to help my child.”

On the 20th August, 2020, the mother brought the child to a doctor which was referred by the MDC of the district. By observing at the condition of the child, the doctor suggested for a surgery at RIMS Hospital, Imphal.

SHARE CHILDLINE Sub-Centre of Churachandpur, Manipur urges you to give chance to the fighting nature of the baby and help her lead a beautiful life by contributing for her brain surgery.