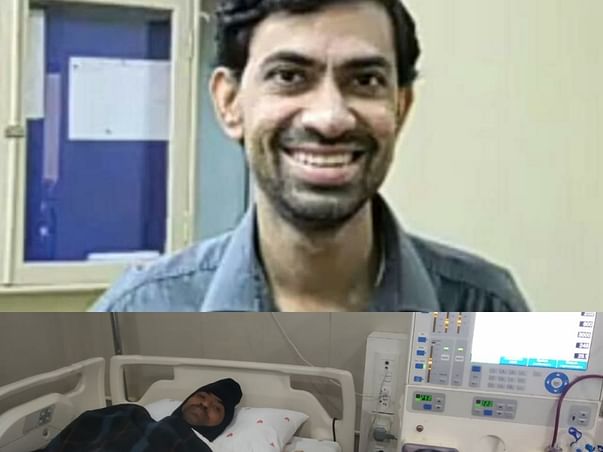 Share
Biplab Roy, an Associate Professor at NITMAS, South 24 Pgs, WB; is involved in research in Biomedical Electronics. He is a real-time hero overcoming so many odds as summarized below, including two times kidney transplantation in 2000 & 2004, he urgently needs our support for the 3rd time transplantation now.
Around 60000 bypass surgeries are done every year in India today. 3 decades back, the figure was around 10000 per year. A similar number must have taken place in India in 1992-93 too. One of those was performed on Biplab Roy. Nothing out of the ordinary, except that he was only in Class 11 then. And this young boy survived that first brush with death, and came out a hero!
In fact the very next year he cracked the engineering entrance code and got admission to Bengal Engineering College, Shibpur. It was great news for his parents.  The end of his four-year course was not so happy, though, and he suffered from high blood pressure. This resulted in him failing to clear the medical test by Tata Steel who had given him an offer of a job. Biplab reconciled himself to his fate and got admitted to the Master's course in the same college. And the hero battled on silently.
Around that time, there was another thing apart from a plum job that Biplab had to let go of on account of his health conditions. He found it difficult to get a health insurance policy on account of all the physical complications he had already faced. But that was nothing, compared to the sacrifice he had to do of a happy married life with the woman he had a relationship with. Biplab realized quickly that his life would be a series of medical conditions, and he didn’t want to drag her through the pain. He requested her and convinced her to move on and settle down with someone else. A tragic hero of a Greek epic.
After his heart and his veins, he got the next knock from his kidneys, which were in such bad shape that a transplant was prescribed. His mother donated a kidney, and Biplab felt that things seemed to be finally right. But he was wrong. By 2004, he was suffering complications due to his kidney again, and a second transplant was recommended. This time a donor was found from outside his family, and the transplant was again completed successfully. Yet another victory for our hero, who simply refused to give in! But it was around this time that Biplab also lost his school teacher father, and was left with his old and ailing mother, whom he still continues to stay with. But with two kidney transplants in the space of a few years, our warrior seemed to have finally won against all his problems.
But even that was not to be. After 16 years with this kidney, he again began to feel complications on account of weaknesses in different organs. In 2020, he was informed that his kidney was again weakening, and he would need a transplant. Yet again, for the third time! Since then he has been undergoing regular dialysis as the search for the donor was launched again. While this was going on, he overcame the physical discomfort and weakness to continue his work as an Assistant Professor at a private engineering college and continued to take his online classes. As always, our hero simply refused to accept defeat quietly!
A donor has finally been found. A long series of tests and retests for that prospective donor is being carried out, to ensure that the donated kidney is well accepted by Biplab’s bruised and battered body. In the midst of weekly visits to the hospital for dialysis, Biplab also continues to take online classes and has also begun working towards a doctorate in biomedical electronics. But now the only stumbling block is the cost of this procedure.
The series of medical interventions that Biplab has endured in the last 20 years have left him and his mother with almost no savings. He doesn’t even have the cushion of a medical insurance policy. In such a scenario, the expected cost of 32 lakhs INR looks like a mountain too steep to climb. His friends have pooled together to collect a third of this amount. But this is one battle even our hero is finding difficult to fight alone.
Someone who has survived so many skirmishes with death deserves one more chance. You have an opportunity now to be a hero for the family of this real-life hero. We seek your help to put your weight behind Biplab. Please contribute with all your might to this worthy cause. We thank you in advance for any help you can provide.