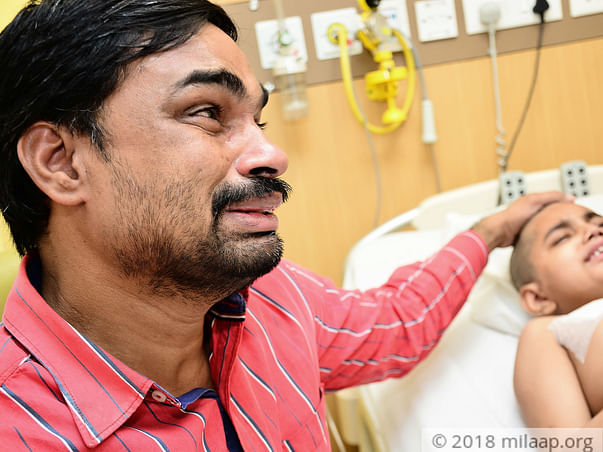 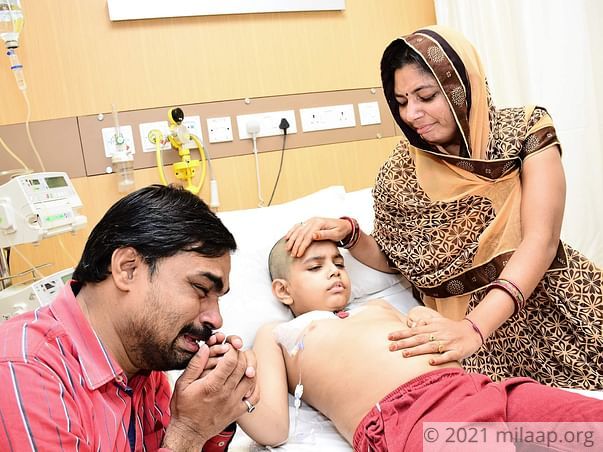 “ Life wasn’t that easy for me ever since I lost my eyesight. I struggled for years to get used to a life of complete darkness. I worked hard and secured a government job. Never did I think that I would get married or have children, but I did. The moment I held my little son Bhavya for the first time in my arms, I decided I would do whatever it takes to provide him with a good life. Now knowing that my son has cancer, I am losing my strength. I may be blind, but I can feel the pain that my son is going through. I feel helpless that I cannot afford to save my son.” - Vikram, father.

Despite his disability, Vikram overcame every difficulty to provide his family with the best

Vikram resides in Bhuni, Rajasthan along with his family. He lost his sight at the age of 4 and since then he overcame every challenge that he faced through hard work and perseverance. He even cleared State Public Service Commision exam and secured a government job as a school teacher. Everything felt right for Vikram when Bhavya came into his life. He found happiness in the innocent smile of Bhavya. When he was blessed with daughter Mahesi, his life was complete.


Bhavya before and after cancer took over his life

“I’ve never treated my disability as an obstacle but as a way of living. I worked hard and crossed every hurdle to get a good job and provide my children a better life. Bhavya has always been my constant strength and support. Every time I go out with him to the market, for every step I take he guides me and tells me about the surroundings. I take him to exhibition every year and he wouldn't leave the place without explaining to me how everything looks. He never left my side and every time I go out, he would be my constant companion. ”

Little Bhavya started having endless fever when he was 5-years-old. He was given medication but his condition kept on deteriorating and after a series of tests he was diagnosed with acute lymphoblastic leukaemia, a type of blood cancer that progresses rapidly when left untreated. Fearing that he would lose his child, Vikram immediately started his treatment.

After 2 years of treatment, Bhavya was slowly recovering from the fatal condition. Vikram had to spend 20 lakhs for the treatment. But after six months, Bhavya started having severe cold and headache. Worried, Vikram took him to the hospital and after some tests, he was told that his son's cancer relapsed. The poor father was shattered. He didn't know how he will save his son this time. Doctors said that he needs an urgent bone marrow transplant. Fortunately, his mother Sanju is a suitable donor for the transplant.

“When he started recovering from cancer, I hoped he would live a healthy life once again. Never in my worst nightmare did I ever think that cancer would relapse and worsen his condition. Every time I talk to him, Bhavya couldn’t even utter a word because of the ulcers in his mouth. He tries to say something, but when he couldn’t, he just breaks down into tears. It hurts me deeply to that my little one go through this endless suffering every day."

Bhavya needs an urgent transplant as time is running out


“Leaving my son when he’s suffering so much is one of the hardest things for me. Bhavya would plead me to stay with him or take him along with him. How can I be with him when I need money to save him from this fatal condition. For years I have struggled with my disability and now I’m struggling to save my son. I’m left with nothing and all I can do is just plead for help to save my son.”

Throughout his life, Vikram has been through a lot of struggles. Despite his disability, he worked hard to give his children a life of ease. He put his blood and sweat to save his son from the fatal disease but it relapsed once again and left Vikram in utter despair. Now only a bone marrow transplant can save Bhavya and Vikram needs your help to save him.