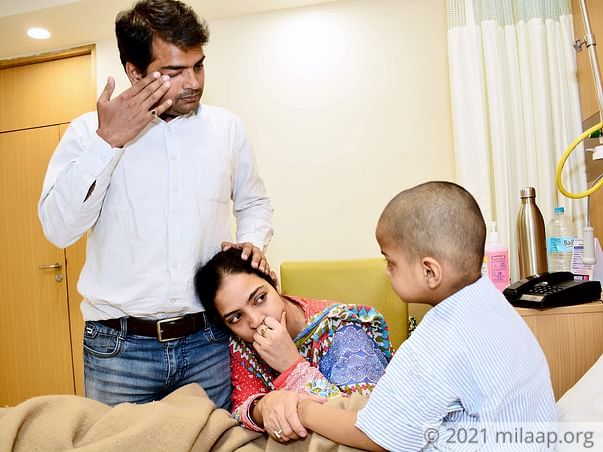 “When my 3-year-old son, Bhavya was admitted to the hospital, initially he would cry and ask us why he has to be in the hospital. But now, he is too tired to even ask that. He's in so much pain that he just keeps crying continuously. Recently, I was fired from the the job because I had taken too many leaves to take my son to the hospital regularly. Now I am able to be by his side every day and night, but I am running out of money to keep his treatment going,” - Himansh, 3-year-old Bhavya’s father.

A small fever was the sign of deadly blood cancer

Little Bhavya started suffering from very high fever in August. He was prescribed antibiotics as usual, after a visit to the doctor. But when the antibiotics couldn’t make his son any better, Himansh knew something was terribly wrong and admitted him to the hospital immediately. Bhavya’s condition began deteriorating and blood count dropped rapidly. After a series of tests, the doctors confirmed that he is suffering from acute lymphoblastic leukemia, a form of blood cancer. He needs chemotherapy to stay alive now. In just a few months, their lives have changed in the worst possible way.

Having lost their jobs, parents are struggling to save their little son

Himansh and Vandana live in Ajmer with their two children Bhavya and Nishasree . Himansh worked as a dentist in a small hospital. For the past 2 months, he had to take a lot of leaves as there was no one else to take Bhavya to the hospital on a regular basis due to which he lost his job. Vandana worked in the accounts department in the same hospital. When Bhavya was diagnosed with cancer, she had to resign from her job too. Now the parents are running out of money for their son’s treatment.


“Every time we get ready to go to the hospital, he starts screaming. We have told him that he has blood infections and only if he goes to the hospital, he can get rid of this. He has become so irritable now. He has mouth ulcers and keeps vomiting. It’s so painful to see my little baby not being able to eat anything.”

Bhavya with his parents and elder sister, Nishasree

Little Bhavya cannot even get up from bed now, needs urgent help

Bhavya loved playing and listening to stories. He also loved reading books. But now, he no longer has the energy to do anything. When his 5-year-old sister, Nishasree goes to play with him, little Bhavya fails to even get up from bed. Now all he wants is to lie on his mother’s lap and listen to stories. Despite struggling too much, the parents are slowly losing hope. The parents are scared that their baby will lose his battle against death.

“In just 2 months, we have already spent Rs 6 lakhs. Whatever Vandana and I had earned over all these years, is gone now. We don’t even have relatives to seek help from. Neither of us has any income now. I don’t know how I will arrange Rs 9 lakhs for my son’s treatment. Doctors have told us that he has good chances of complete recovery, but if I fail to arrange the money, I will lose him.”

3-year-old Bhavya is suffering from a severe form of blood cancer. With no income, parents are struggling to save their son.They have spent everything they had and have no one to turn for help. They live in constant fear of losing their son. 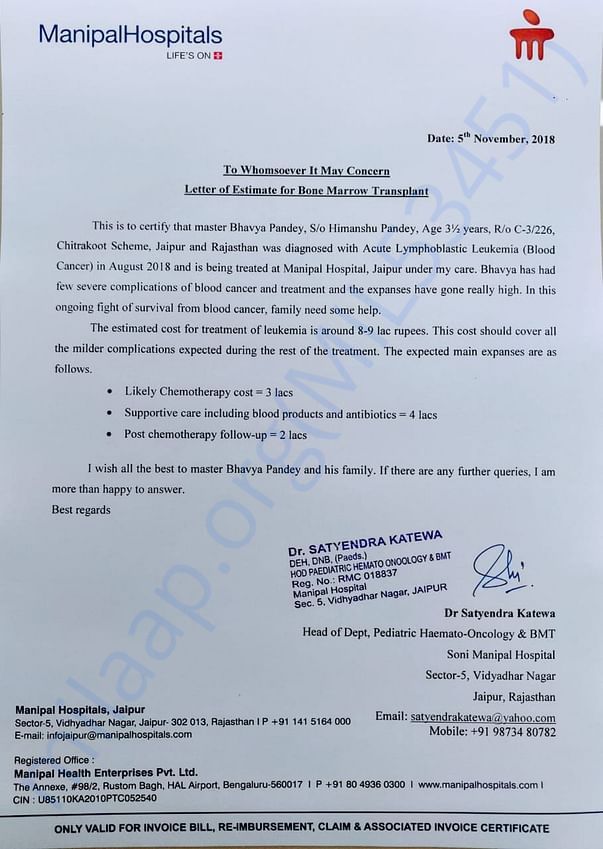 Thank you all for the love and support showered on Bhavya.

Bhavya is doing good. He is still undergoing his treatment. He is recovering well and is responding good to the treatment.

Thank you all for the love and support showered on Bhavya.

Bhavya is doing good on chemotherapy.  We have completed his high dose Methotrexate courses and now continuing with remaining chemotherapy cycles. Since he is a standard risk leukemia patient, we need to treat him only with chemotherapy.
Will keep you posted.

Bhavya is now undergoing the 4th month of chemotherapy. His CBC counts and platelet counts are very less as of now. The total treatment will take up to two years. After two years and six months, the doctors will analyse how much effect the chemotherapy has had on him and decide on further action.

Bhavya keeps asking me for how long he has to keep coming to the hospital, and we keep telling him that everything will be fine soon. I request you all to please pray for my sons speedy recovery. This is a very tough time for him and I want him to be happy and healthy soon.

Scan & donate with any app
check_circle_outline Download payment receipt
Report fundraiser
Know someone in need of funds for a medical emergency? Refer to us
Rs.260,510 raised

Donated to this campaign via Bank transfer/QR Code? Click here if you can’t find your donation listed below.
KS
Kamal donated $5

Get well soon, God bless you

Donated to this campaign via Bank transfer/QR Code? Click here if you can’t find your donation listed below.
KS
Kamal donated $5

Get well soon, God bless you

UG
You are sending a message to
Umesh Goswami
Go back 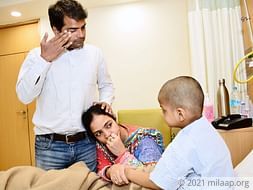