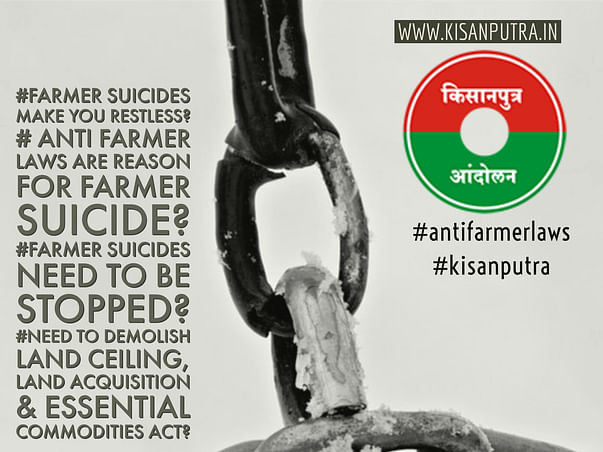 The first amendment to the Constitution was made on June 18, 1951. This amendment abrogated the fundamental rights of the farmers. As per the provisions of newly inserted Article 31B of the Constitution, new Ninth Schedule was incorporated in the Constitution. Jurisdiction of the Supreme Court is barred against the laws placed in Schedule IX. There are 284 Acts in this Schedule IX, out of which 250 Acts are directly related to farmers. And it cannot be sheer coincidence. Among these, the Agricultural land ceiling Act, Essential Commodities Act, Land Acquisition Act are laws that make farmers enslaved and exploit them. Kisanputra agitation was started to seek abolition of these laws. We were under the belief that as judicial redress cannot be obtained against these laws, this path was closed to this agitation. But the young man Makarand Doijad showed us a new path.

Makarand Doijad presented two incontrovertible facts.
1.Even though the courts cannot be moved against the laws included in Schedule IX, there is no prohibition to approach Court against Art.31B. If 31B is held Unconstitutional, then Schedule IX automatically falls flat.
2.One could understand the Justification of Art. 31B and Schedule IX until the right to property was the fundamental right. But now the right to property, the fundamental right guaranteed under Art. 19 (1)(f) no longer exists, then what is the justification for Article 31B  today?
3. Based on these and some other issues, Makarand has filed a petition in the Supreme Court on March 16, 2018. (D.No.10668/2018). Please note the importance of this petition. This type of petition has not been filed in the last 67 years. For the first time a Kisanputra has knocked the doors of the Supreme Court to emancipate the farmers from slavery.

Who is Makarand Doijad?

After reading the Q&A book of Kisanputra Andolan viz. ‘Why should the anti-farmer laws be abolished?’ Makarand did in depth study of the constitutional and legal aspects of this issue.  He hails from Hatkanangle taluka of Kolhapur district, and runs a fabrication industry in Pune. He is an engineer. After his presentation in Nagpur seminar of Kisanputra Andolan, a decision was taken to file a petition in the Supreme Court.

If this petition is allowed, the machinery operating for the exploitation of the farmers would be dismantled. ’ Bharat’ will be liberated from the colonization of ‘India’. Indian farmers will be able to withstand world's competition. New industrialization will be started centred around agriculture. And the way to sustainable employment will be opened. The talented and investors may be attracted to farming. Overall, the dawn of Bharat's freedom will emerge.

Friends, fighting   case in the Supreme Court involves huge expenditure. It is beyond the capacity of a lone individual. The petitioner Makarand Doijad says that the total cost will be 10 lakh rupees. One thing is certain that he will not desist in any condition. But we must accept some of our moral responsibilities.
If only one thousand persons in Maharashtra donate one thousand rupees each, we can collect one million rupees for this movement. You are one of these thousand Kisanputras. We earnestly urge you to make your contribution.

Friends, this historic petition should not lag behind due only to lack of money. Those Kisanputras who are earning today should definitely take part in this battle. The last date is 1 August 2018. Yes, the collection will be stopped earlier, if the target of 10 lakhs is reached earlier. Contributions made afterwards will not be accepted. Makarand tells me that the donors of amount will be personally informed about the utilization of the amount. Those who send the money may please inform their name, village and mobile number to Makarand.